Finished with the carving.

Since the name of the pony is such a short one, carving a name sign isn't such a big deal. I made the two stars yesterday and the BA. today I finished the S.

I'll probably cross cut the board a little too long out here, and then let Gustav decide on the length once I get home.
He will probably also be interested in doing the painting of the sign.

Based on experience, I have found that the best way to paint such a sign is by priming and then adding a base colour. I prefer to use a spray can to avoid filling the letters with the base colour.
Once that is dry I use a small brush for painting the letters inside in a contrasting colour. I like to use red for base and white for the letters.

If I had to do the paint job on board, I would use a tooth pick for the letters. That was how I did it last time, and it is easy to get into the small corners.

The sign will eventually look better with paint since it will make it easier to see the depth of the letters. 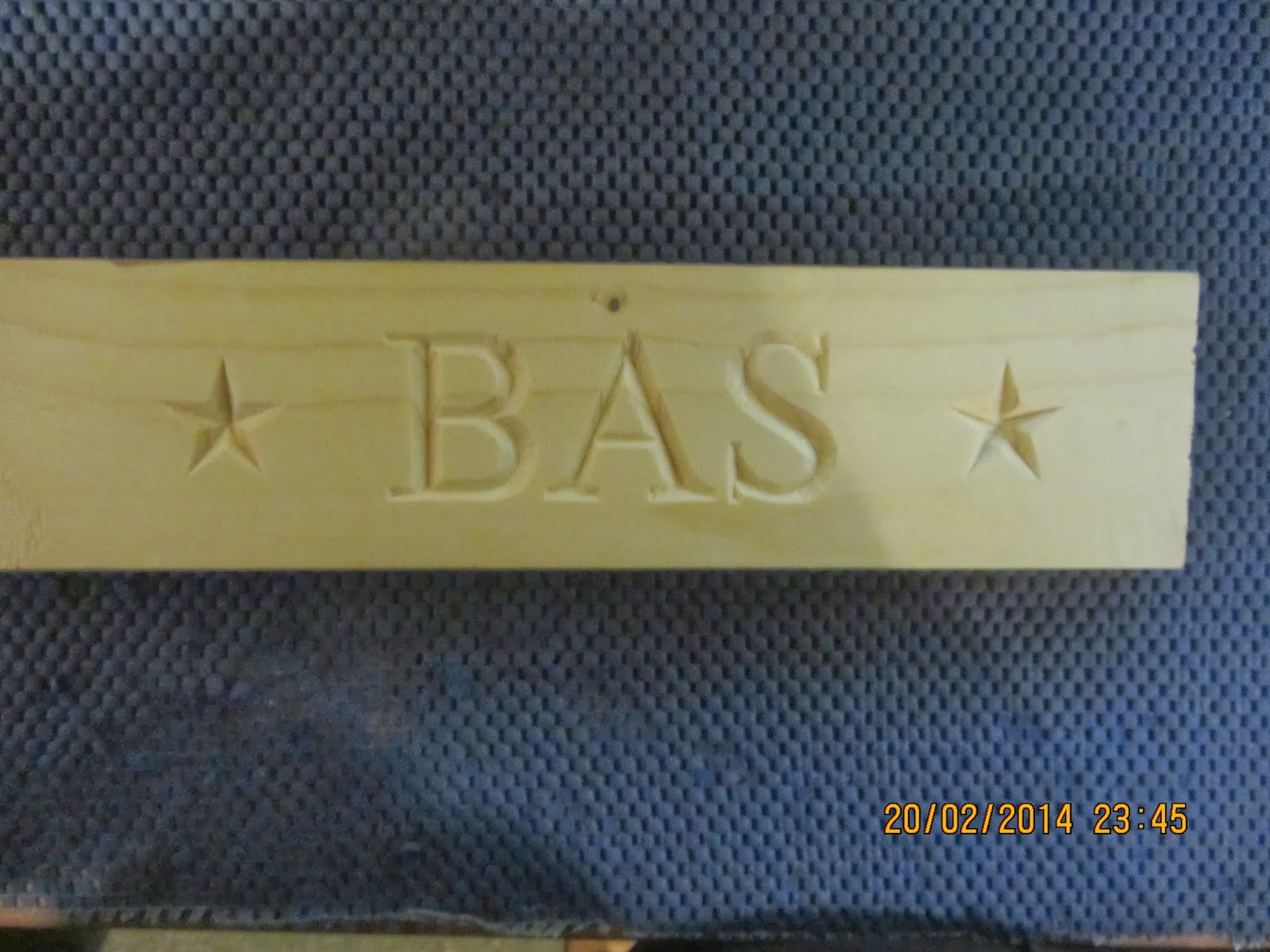 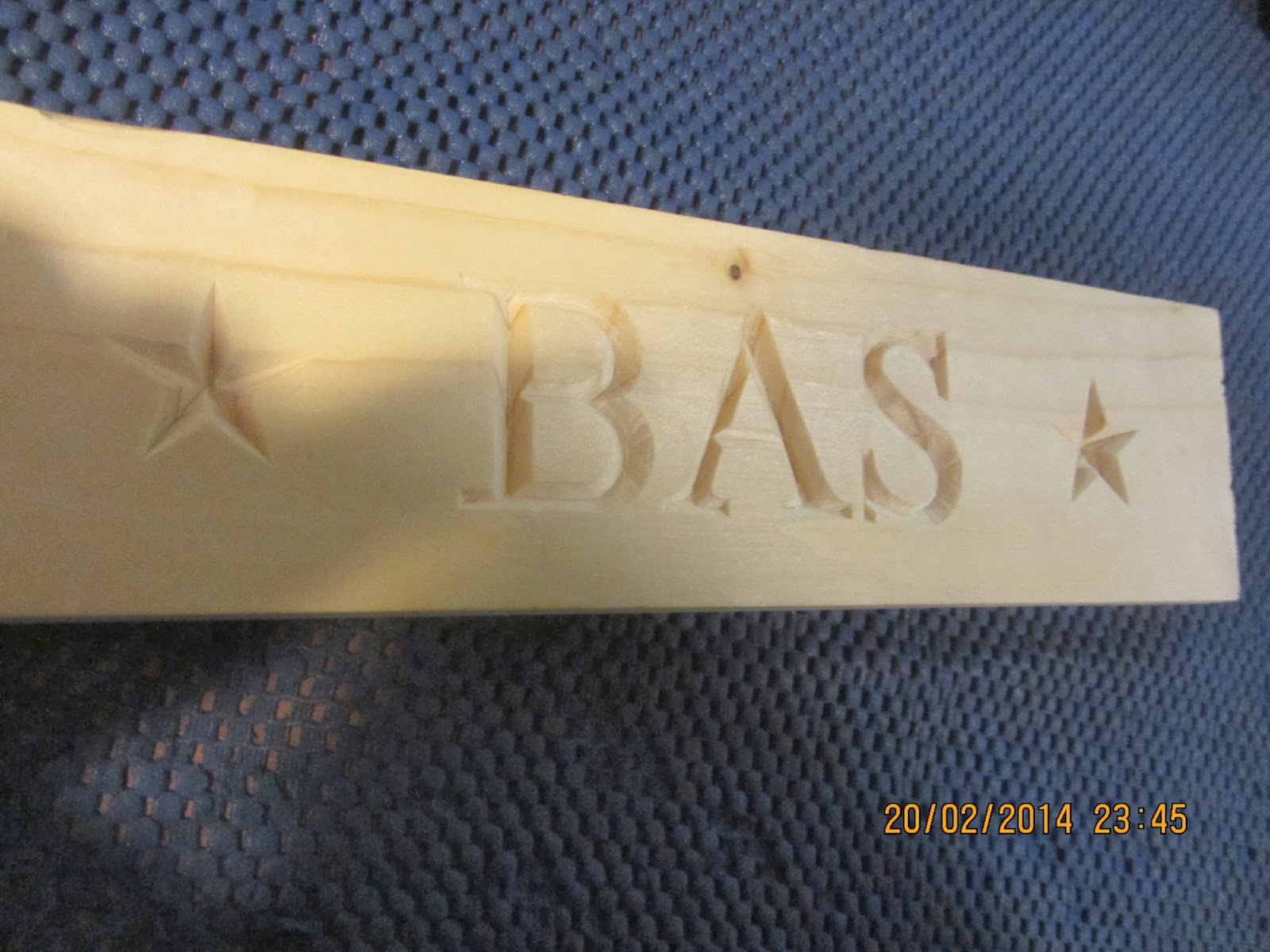 There have been precious little leisure time on the ship lately, mostly because we have been relocated to another assignment, so instead of basically serving 1 rig, we are now serving an entire field. It is kind of like a grocery delivery round.

So instead of starting some large fancy projects (another chest), I decided to carve a name sign for Gustav's pony.

The pony that belongs to our friends was recently moved to another stable, so now there is just our own 2 ponies and the horse left.
The horse and the small pony each have their own carved sign, but We I have never taken the time to make one for the last pony. I doubt that he cares, but I would like to make a sign, because it is a cosy little job that can be done basically everywhere.

I picked a piece of wood (from a pallet..) surfaced the four sides of it, and that was the entire stock preparation.

I am sure that there are a lot of skilled carvers out there who are able to draw their own letters, and make any sign look great. I am fairly sure that any attempt from my side to design my own letters would be downright ugly.
Therefore I use the same method that I have used for the other signs I have carved:
The name for the sign is written on a computer, then printed out and taped to the stock.
Normally I would use the font: "Clarendon bold". But I couldn't find it on this computer, and the Internet connection was so slow the other day that I was unable to download it. Instead I found another font that looked OK.
The text to be carved is enlarged to a size that will seem appropriate for the sign. In this instance I used
a font called "Mongolian Bait", font size 160.
The starts are "Windings" size 110.

Once the text had been printed out and taped to the stock, I carefully cut the outline of the letters / symbols with a hobby knife. The tip of the blade leaves a very fine line on the wood so the letters can be seen when the paper is removed.

I start by carving in the middle of the letter / symbol, then gradually increase the depth and width of the cut. I guess that my angle of the knife is 60 degrees. That leaves a nice and fairly deep carving that will look good once the sign is painted. 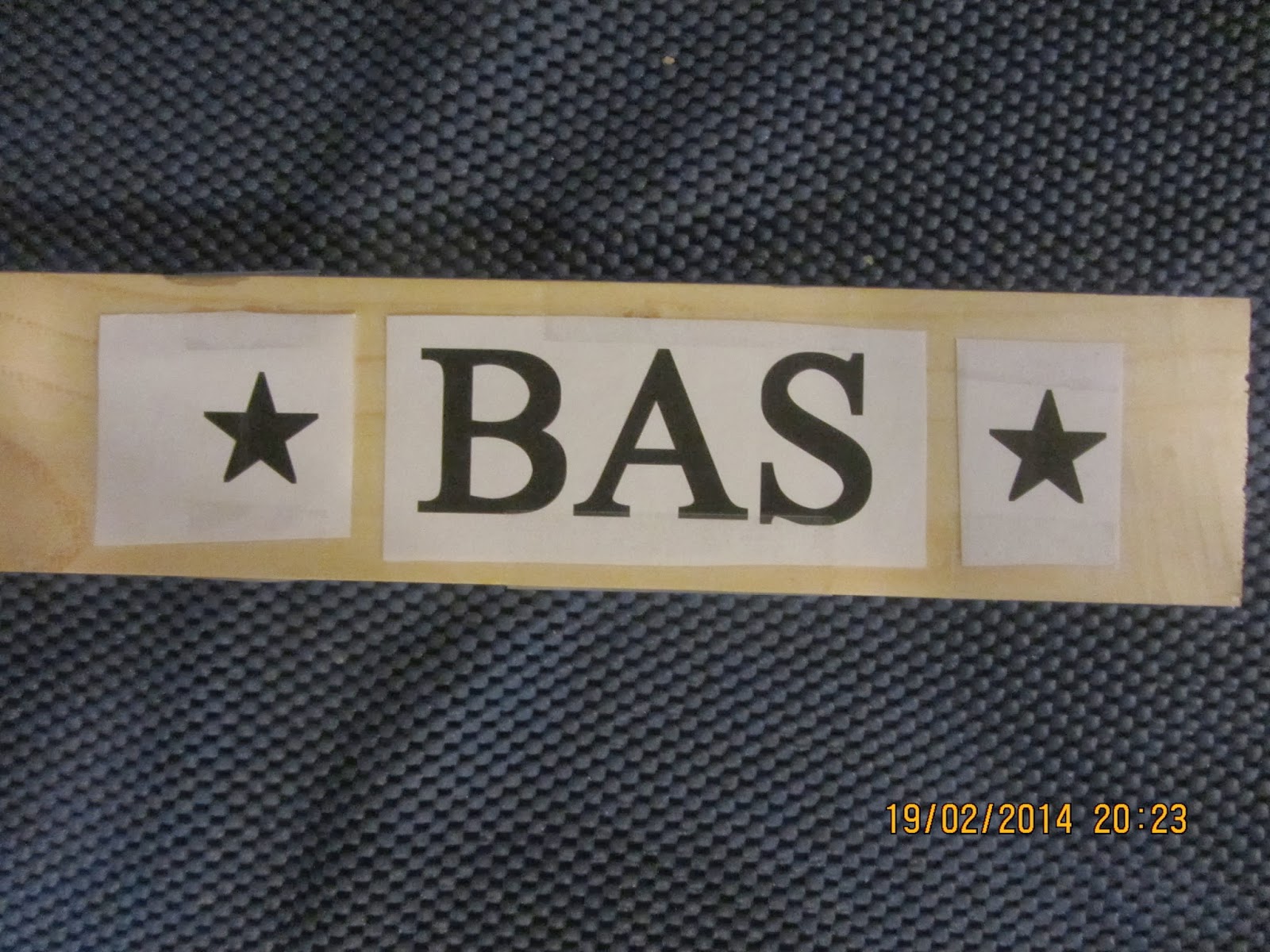 The print out taped to the board. 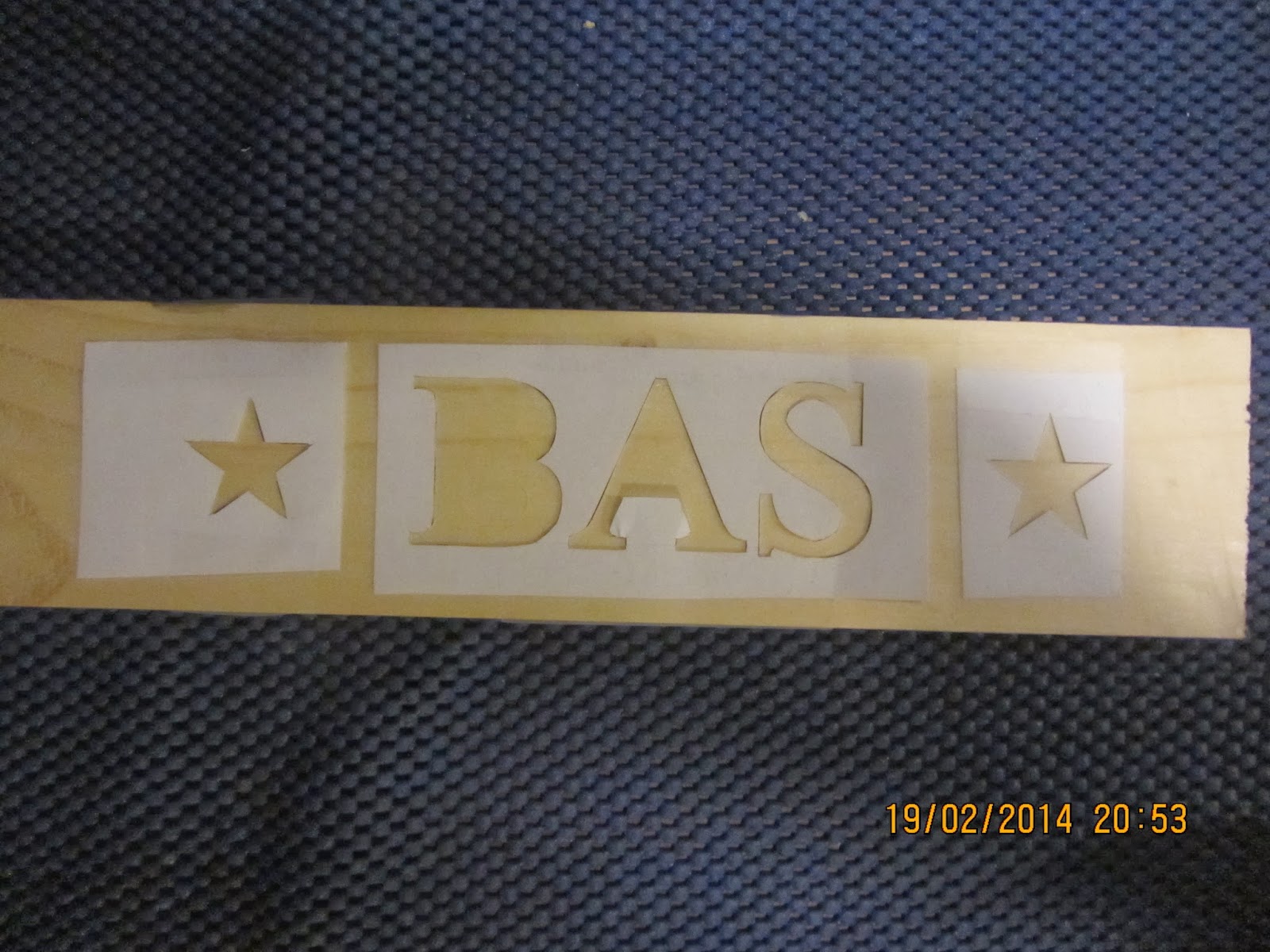 The letters have been cut out. 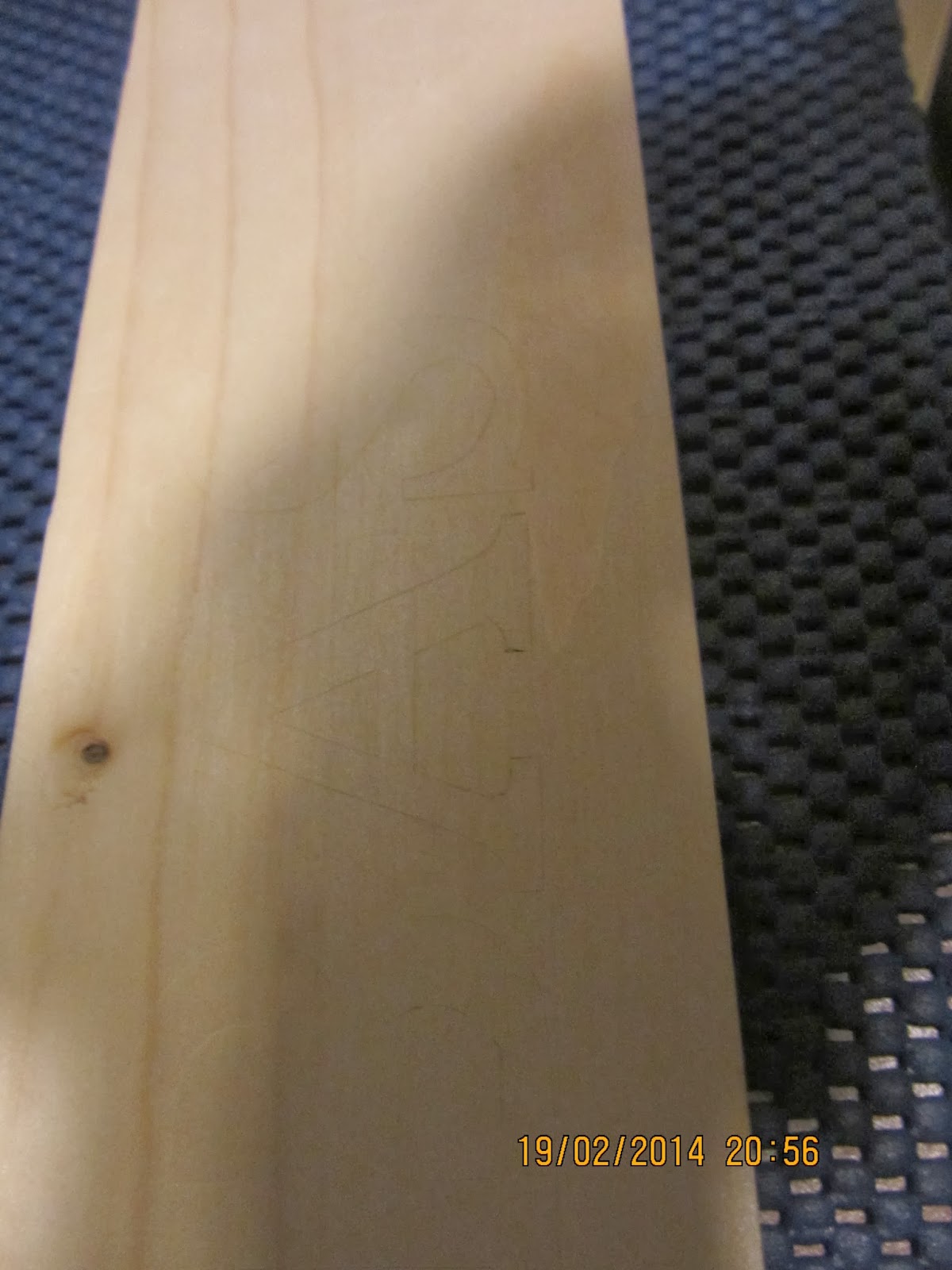 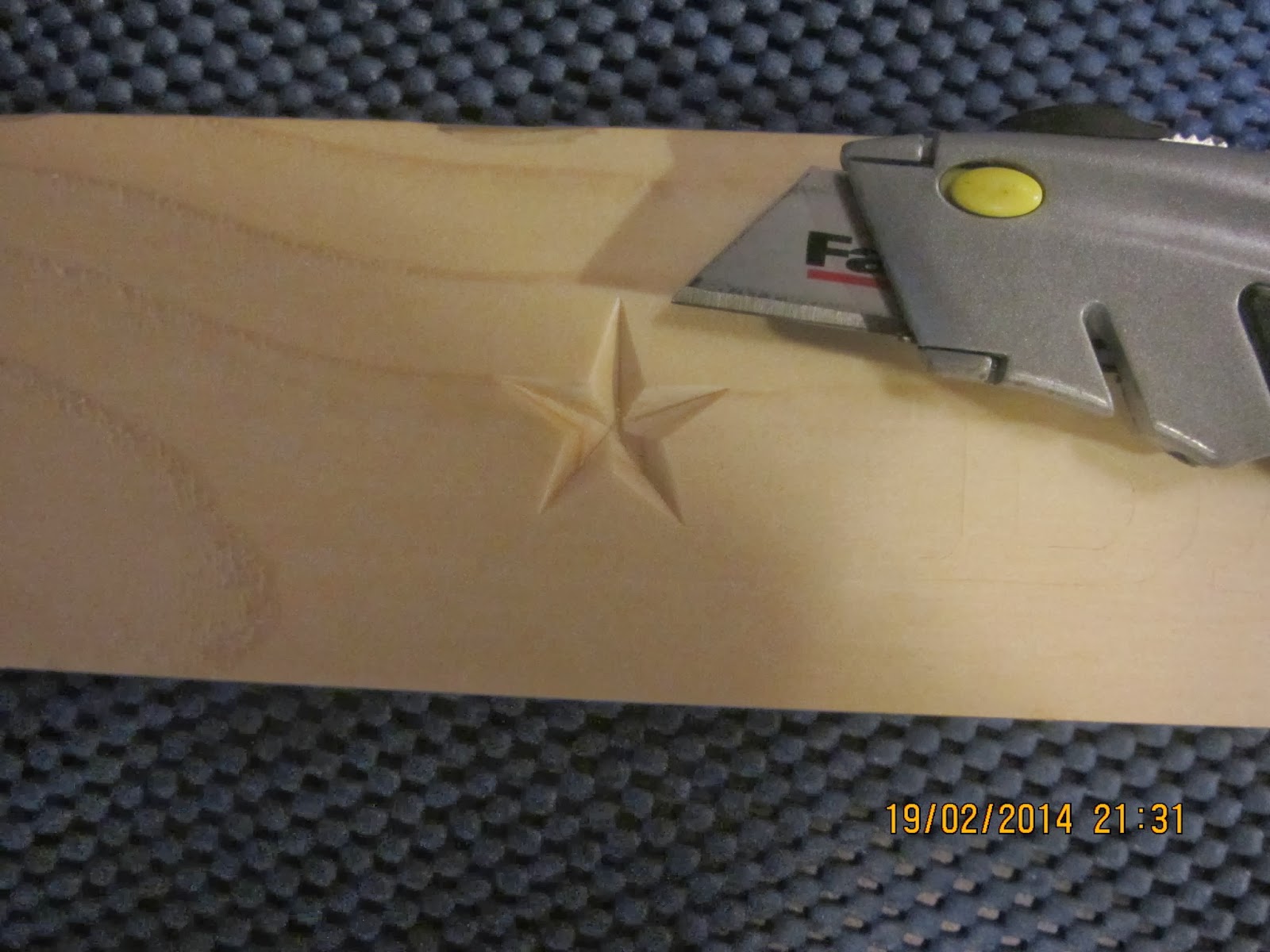 The first carved star and the tool used for the job.

Anchor No 3 hand plane, the result

The plane needed more work than I had imagined, not any major problems, but it had enough flaws to ensure that it would not work properly. I suspect the reason for the plane to be in such a good shape is because it has never worked very well and therefore it has never been used much.

The lever cap problem is illustrated by the 2 pictures where it can be seen that during mid closing of the lever, the tension is a lot stronger than when the lever is closed.
During the mid closing position, the distance measured 6.5 mm, and when the lever was closed it measures 5.2 mm
I solved the problem by rounding the corner with a file. So now the mid closing distance is more like the 5.2 mm, I didn't do a second measurement, but it feels right so it is probably OK.

The frog had a little rust all the way down, where the blade is supposed to rest. I took a file and gave the frog a few swipes with it to remove the rust. Much to my surprise, the front of the frog was so poorly machined that the blade wouldn't even touch the end where it should. I filed some more, and ended up with a flat front after some time.

To make the frog fit the sole, I applied some grinding paste and tried to see if that would do the trick. It wasn't quite enough, so I had to remove a few burrs with the file. Then back to paste grinding.

I had found that the frog couldn't be moved far enough forward to make a really tight mouth, and I suspected that the washers for the frog holding screws were the cause. I found out that adding a washer behind the slotted piece of metal also enabled the frog to be able to move as I wanted it too.

The sole needed a little flattening, but nothing serious.

All that is left now is to sharpen the blade and test the plane. 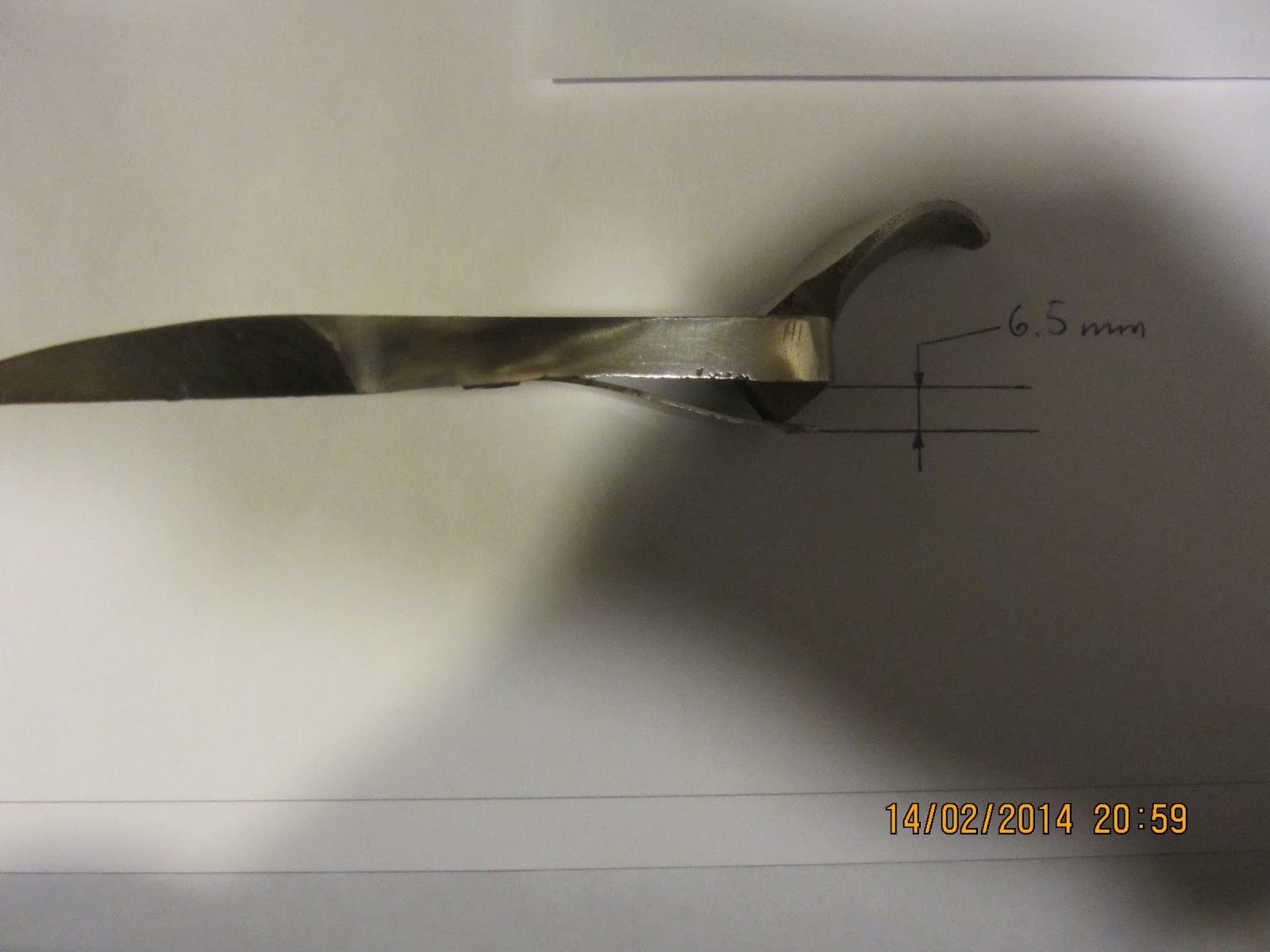 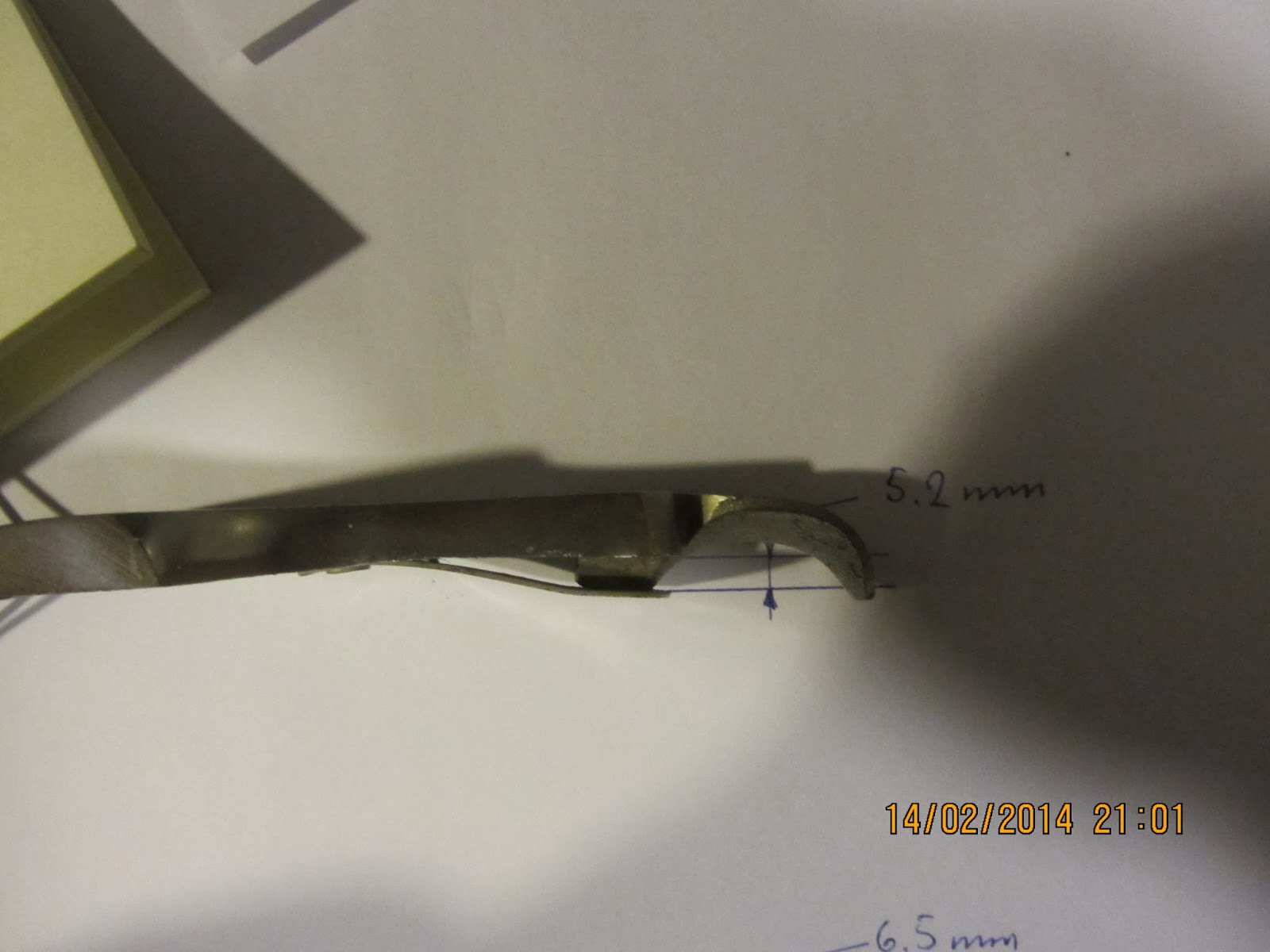 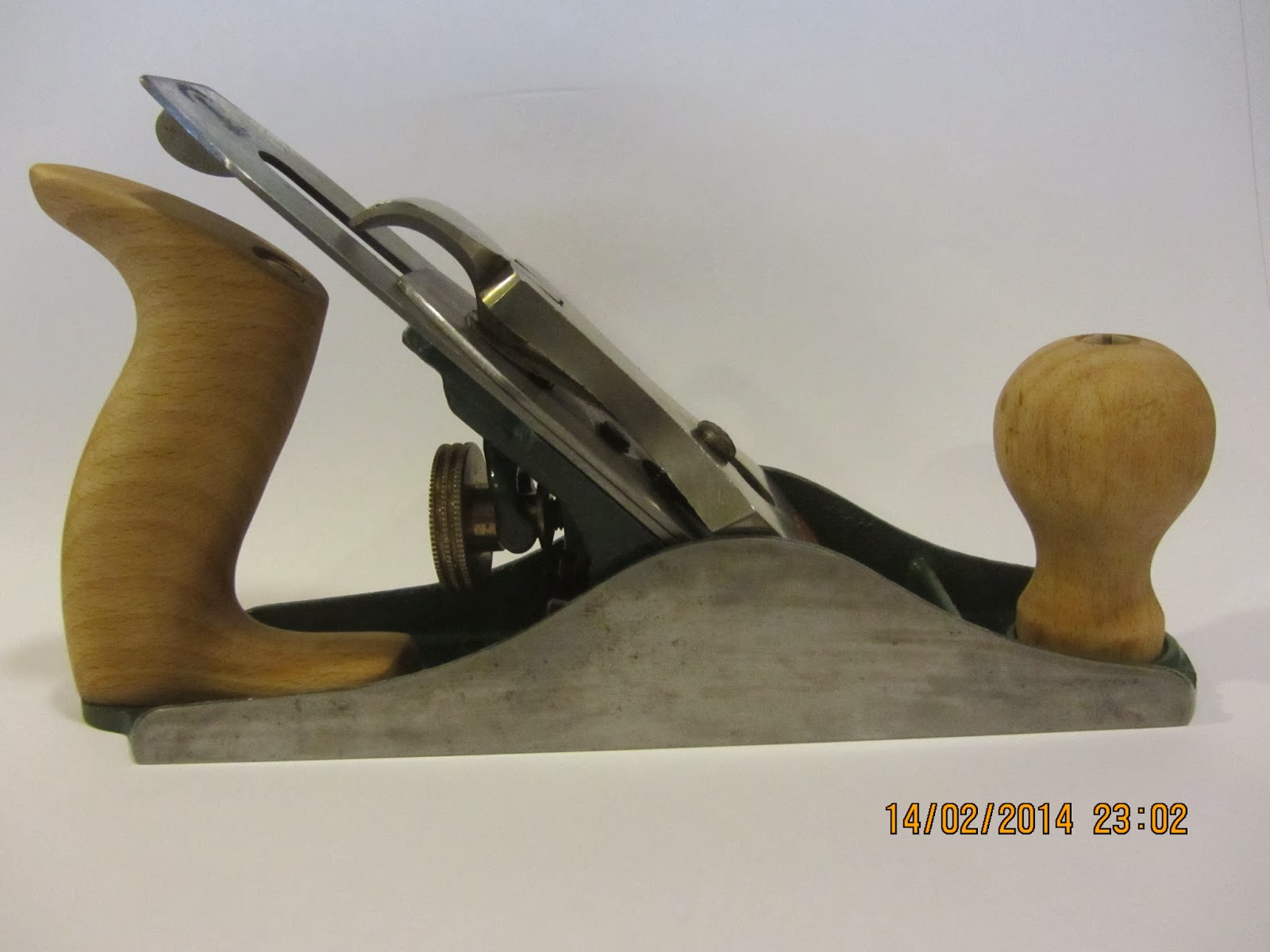 Just before signing on the vessel, we had a family trip to Sweden for skiing.
I was so lucky that there was an auction close to the ski centre, so I only skied one day, and the  next day I went to see if there was any interesting things up for sale.

I ended up with a total of approximately 8000 nails, some braces, a set of dividers, 3 very old braces some hammers and 2 hand planes, a Hellstedt No 5 and an Anchor No 3.

Both planes were in a pretty good state, but none the less, I decided to bring the No 3 with me on board for a little make over.

The totes are made out of beech, and they were originally varnished with a thick coat. This coat has cracked and has started to come off in various places making them rather uncomfortable to grip. I am sure I would get a blister in two minutes time by using it.

The sole needs to be straightened and the frog needs a cleaning for some rust. In addition to that I am considering to modify the lever on the lever cap. When closing the lever the corner sticks out too far, so it is basically necessary to re tighten the lever cap screw after mounting the lever cap.

The washers for the frog screws maybe need to be a little smaller, since the mouth can't be set to a really tight opening due to that the washers limit the movement of the frog. 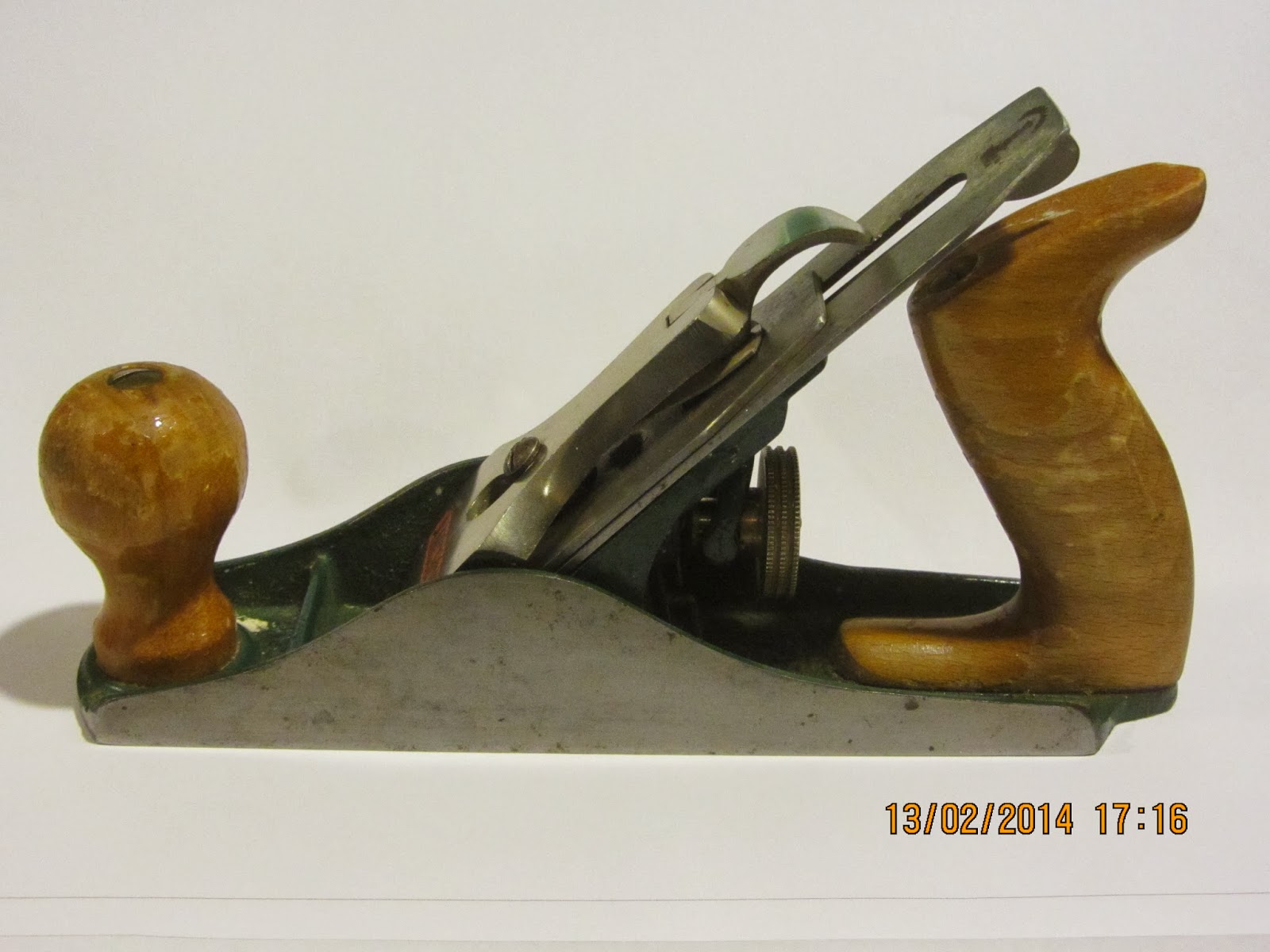 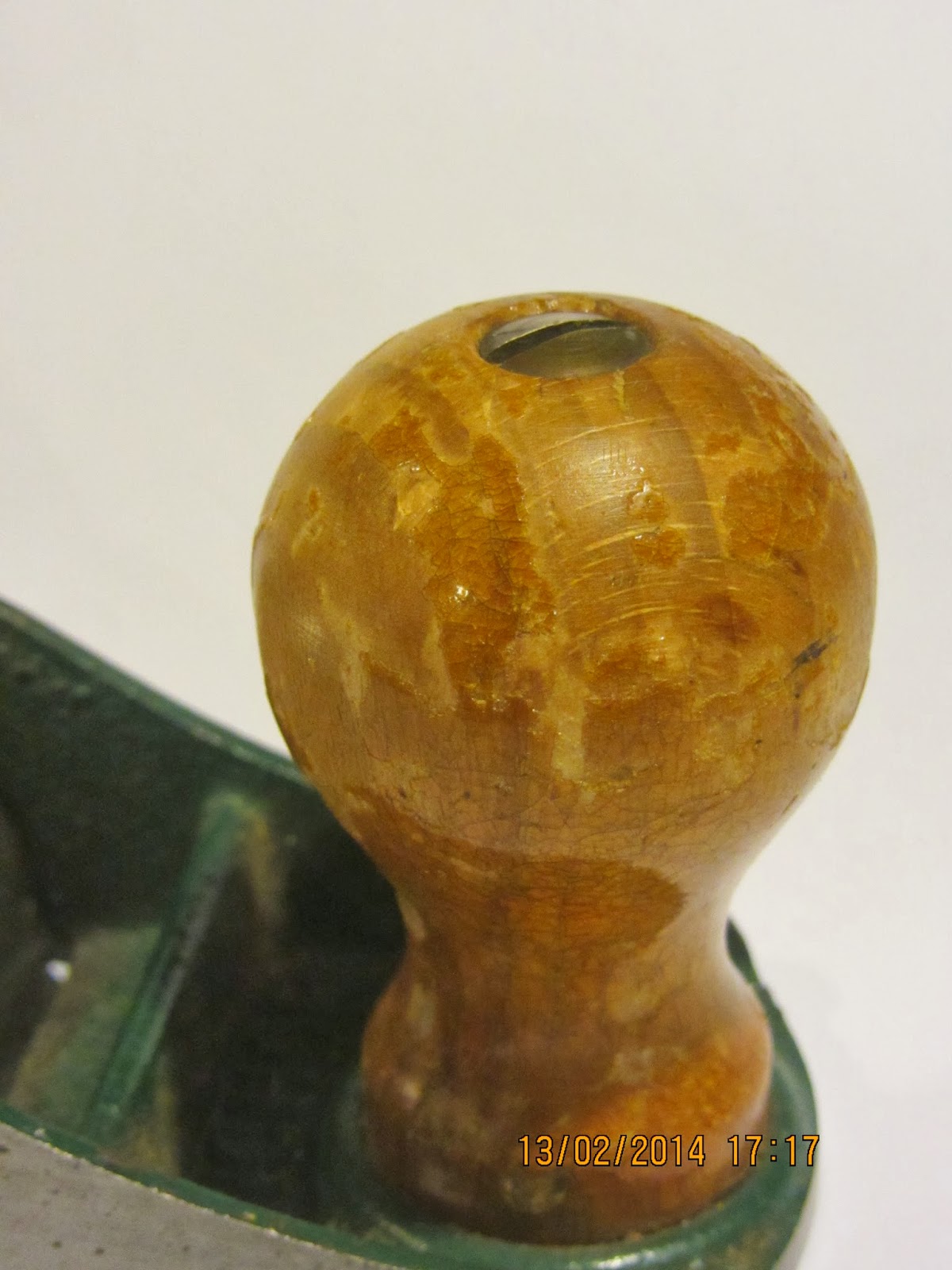 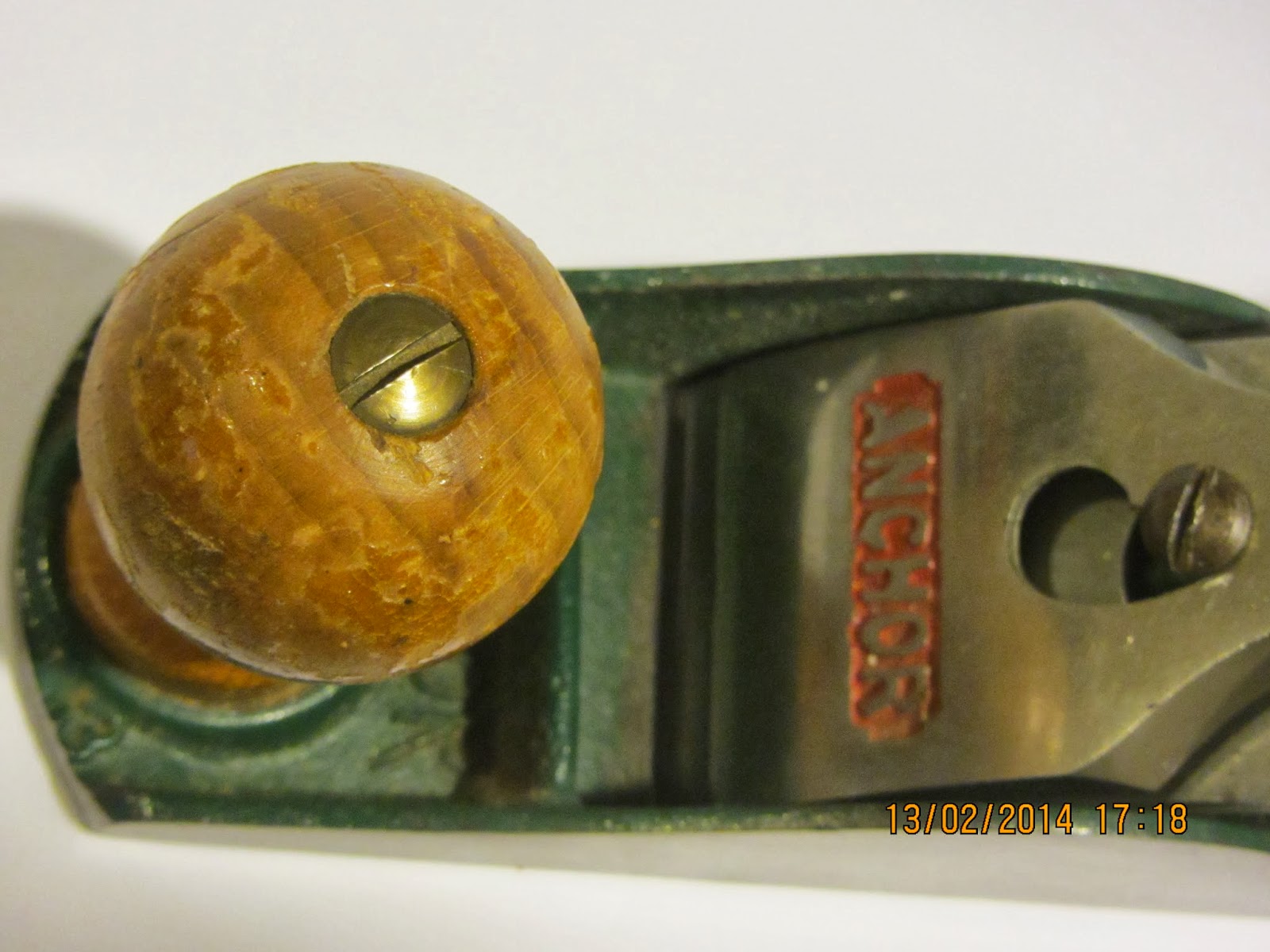 More cracked varnish
Posted by Jonas Jensen at 10:23 AM 6 comments:

Gustav has often talked about that he would like to earn some money. He gets a small weekly allowance, for doing various chores in the house. Once in a while there is a possibility of earning a little extra by e.g. moving fire wood to the shed or sweeping the machinery shed.

He would like to make something that he can sell, so I started thinking and rationalised that the majority of people in our area has a need for apple storage boxes.
The beauty of apple storage boxes are, that they don't need to be super smooth or 100% square. In other words: A great children's project.

I made some ½" boards that could be used for the production, and we talked about a design. Gustav wanted to be able to make the boxes all by himself, so we also made a jig that could be used for the assembly of the ends for the boxes.
We then assembled one box where I helped and gave some hints. After that he set to work.
The master plan is to make enough of those boxes so he can sell them at the local grocery for the yearly trunk sale to be held at the parking lot.

Today he asked the manager of the local grocery store, if she was interested in buying some, and she actually thought they looked very good, so she immediately ordered 2 boxes. Gustav went home and made two boxes at once, I then drove him down to the grocer again, and he delivered the boxes and received his "hard earned cash". He felt really proud of himself and is still determined to build as many as possible. So I guess that I need to make some more boards for him at the sawmill.

For my part, I have finished the tables and benches for my friend and the model air plane club. Another friend of mine are moving to a new house, and she would like a new table, so she came to our house and saw the tables that I had made. She really liked those, and was about to sign up for one. But I wanted her to know that there were other possibilities as well. So I showed her some other alternatives, and she immediately fell in love with a Barnsley hay rake table.

I have wanted to build this table ever since I saw it in Popular Woodworking in 2009, but I have never had the need for building it. But now there is a legitimate reason for making one.
The challenge is that the desired size is approximately 4' x 10' and the top should be 2" thick. So it will be a rather large and heavy table.
The table will be built out of larch (as usual), and I have started milling the stock at the sawmill. The logs have been sitting for quite some time, so they are not that wet any more. I still expect some wood movement, but I have explained that it is unavoidable with a massive tabletop of this size.

The plan was to glue up the legs to avoid the pith. But once I had cross cut one of the planks, it was revealed that the pith had moved a bit to the side during growth.. I still think it will be less prone to develop cheeks than if I had sawed a 5x5" with the pith in the middle. 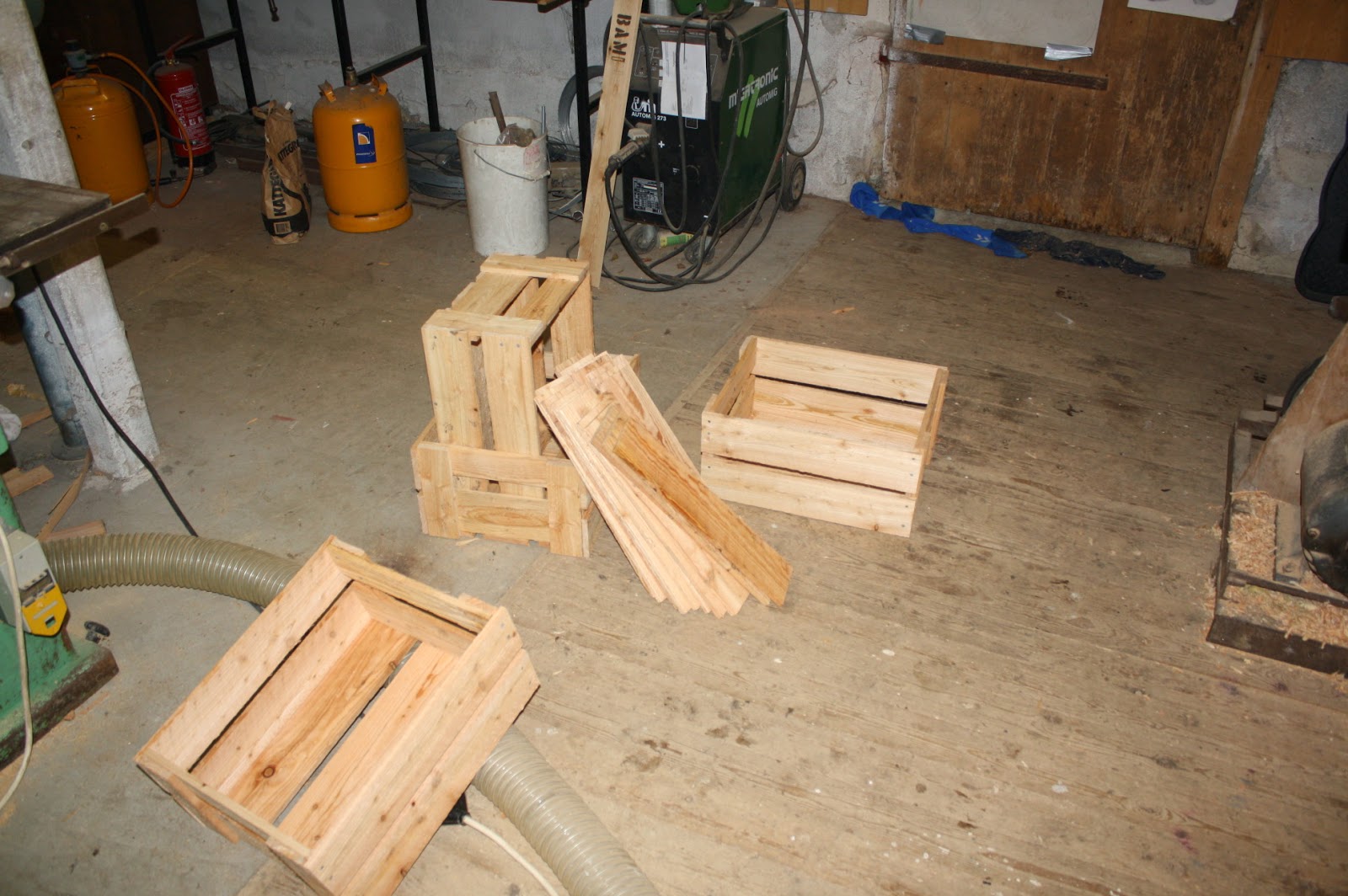 Some of the apple boxes. 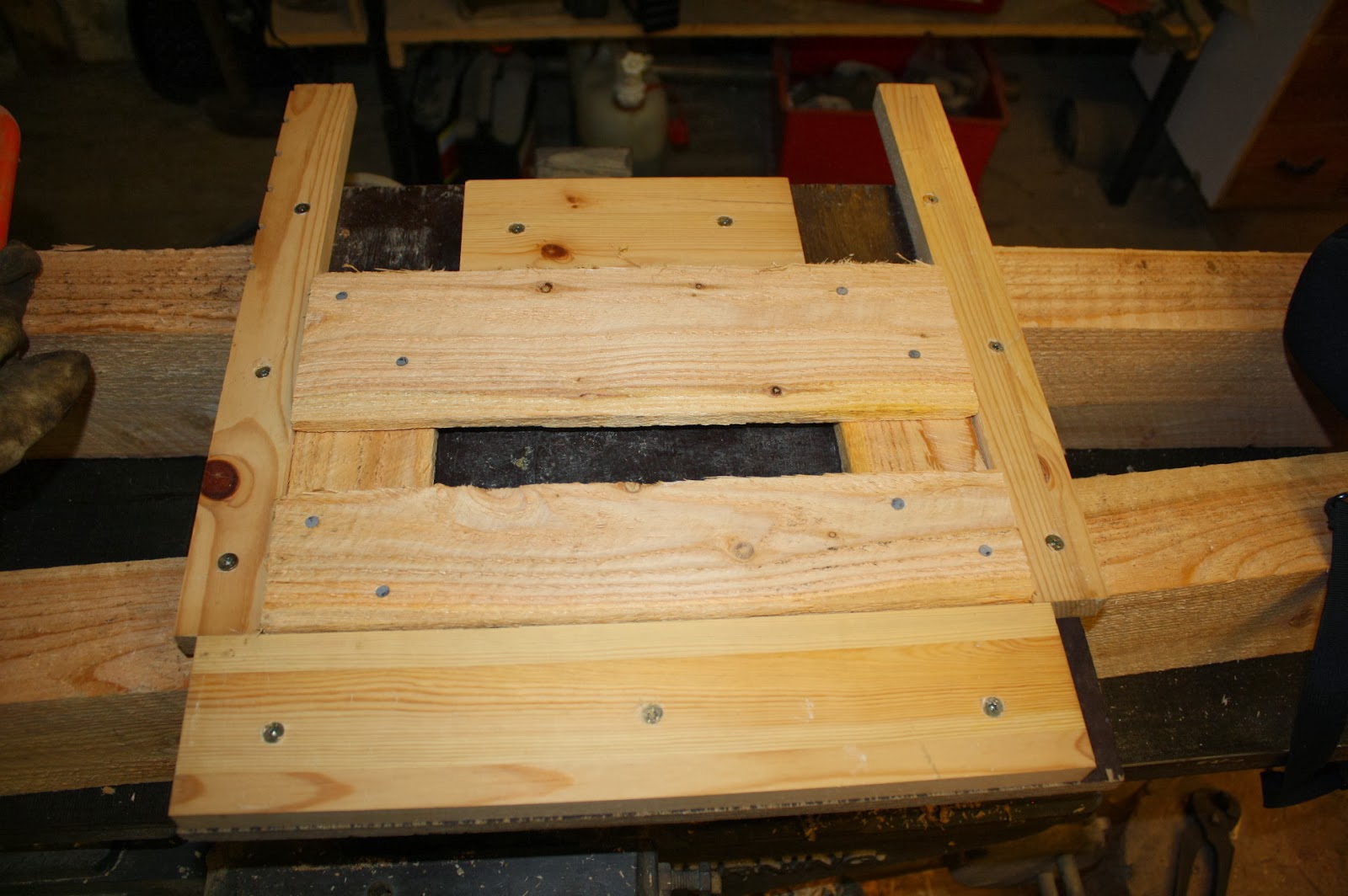 The jig with a completed end. 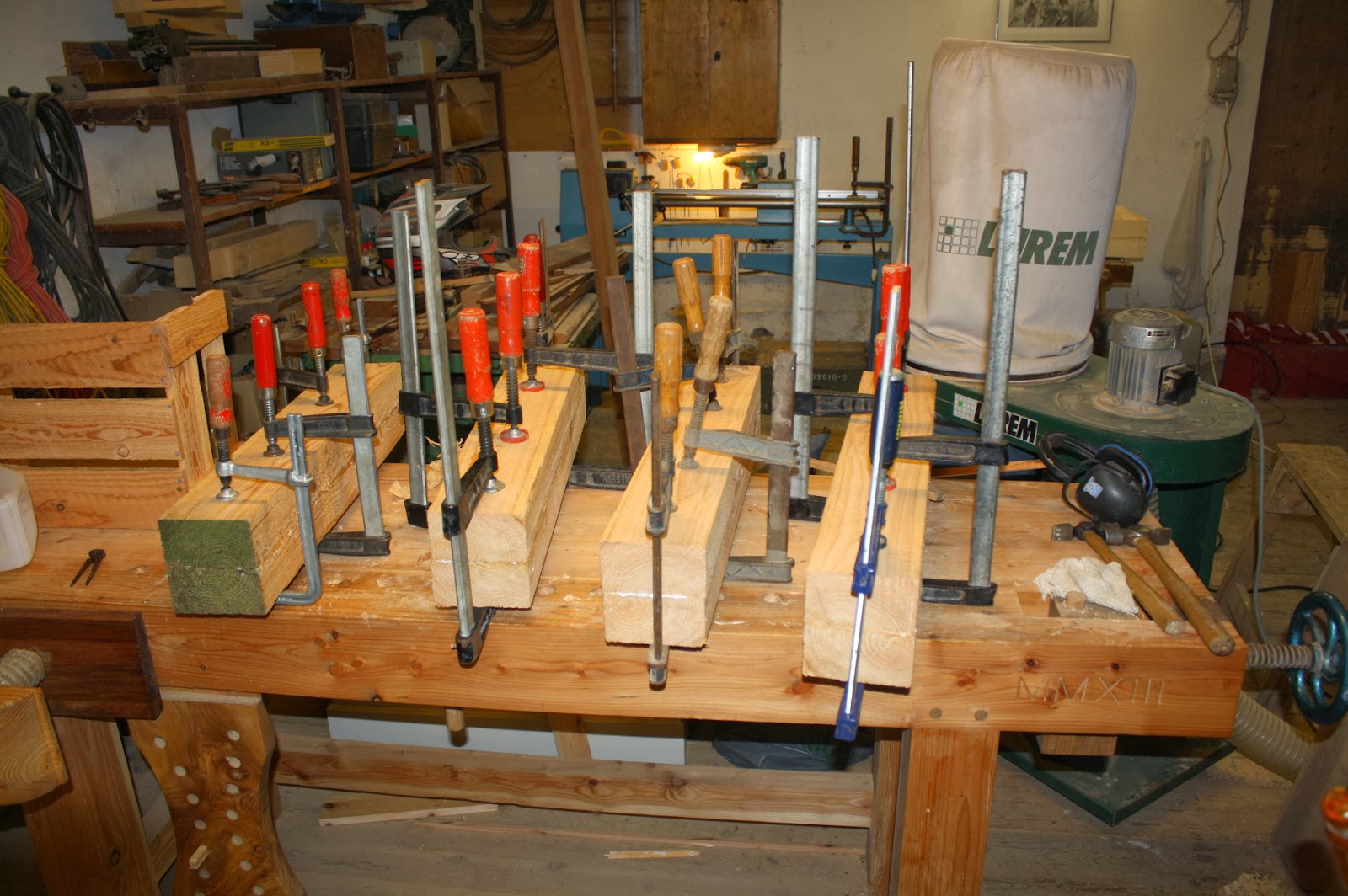 Glue up of the legs for the table.