Another day of the epic chair building arrangement has come to an end.

Today we worked on stuff that ended up looking like parts for a chair, which was a great leap forward compared to the various #$£% ups yesterday.

I started out trying to make a nice round dowel for my final attempt of steam bending. I had done some of the job yesterday with one of Brian's spokeshaves, but it needed some more work to look really nice.
After a short while I decided that it would probably be a great idea to make a dowel maker. So without consulting any books ore other sources of information, I ground an old plane iron and made a wooden holder for it.
At first it worked really fine, but it was a bit tight on the dowel, so I wanted to try to reset the iron. Then it went from fine to disastrous. I got a bit angry since I had made this special tool to make it easier. And with a bit of temper I decided that maybe it would be better to clamp the tool in the bench and turn the dowel instead. This really didn't help since the dowel wasn't completely straight, and the new setting of the iron was more aggressive. The result was the some heavy tear out and a not so round dowel.
I managed to cut my finger in the process too, so I resigned and went back to the spokeshave that had to be used even more now because I had to reduce the diameter of the entire dowel to 25 mm (1") from 30 mm (1.25"). The dowel is 2.4 meter long, so it took some time.

The finished dowel went into the steamer and sat there for about an hour and a half.
For some strange reason the bending actually worked OK. There was a bit of splitting, but not more than what could be glued once the piece had dried.

With such a huge success under my belt I was ready to start on the seat itself.
I planed the blank using a scrub plane and traversing the entire time. Much to my surprise the result was a nice flat surface without tear out. It didn't even look fuzzy.

In the mean time Brian had finished planing his seat blank and he had started saddling it. He was happily chopping away with an adze and looked just as professional as he is. That did sort of put some pressure on me.

Having had success with the steam bending and the planing of the seat I decided that I was probably smarter than anyone out there who had ever built some sort of Welsh stick chair or Windsor chair. Therefore I would not use that old fashioned adze method for saddling my seat. First off it looked kind of difficult, secondly it also strongly resembled good old fashioned work!

I have seen Mario Rodriguez saddling a chair using a tablesaw, but I had to saddle the seat of a settee so I had to invent something else.
The logical step was to use a circular saw.
I attached a board under the base of the saw and started dragging the thing diagonally over the surface of the settee seat blank, using the saw as some sort of router.
This approach worked really well.
In very short time I had saddled the seat and it looked good with a minimum of bumps and definitely better looking than what I could have made using an adze. Here's a link to a video of it.

Next I used my old compass plane to make the saddling a little more round in the bottom.
After that I used my belt sander to clean up the saddled parts of the seat.

Actually today was a great day with success pretty much all the time.
Tomorrow I'll probably start on the legs and the spindles for the back of the settee.

Remember to visit Brian's blog for even more pictures and yet another eye witness account of the day. 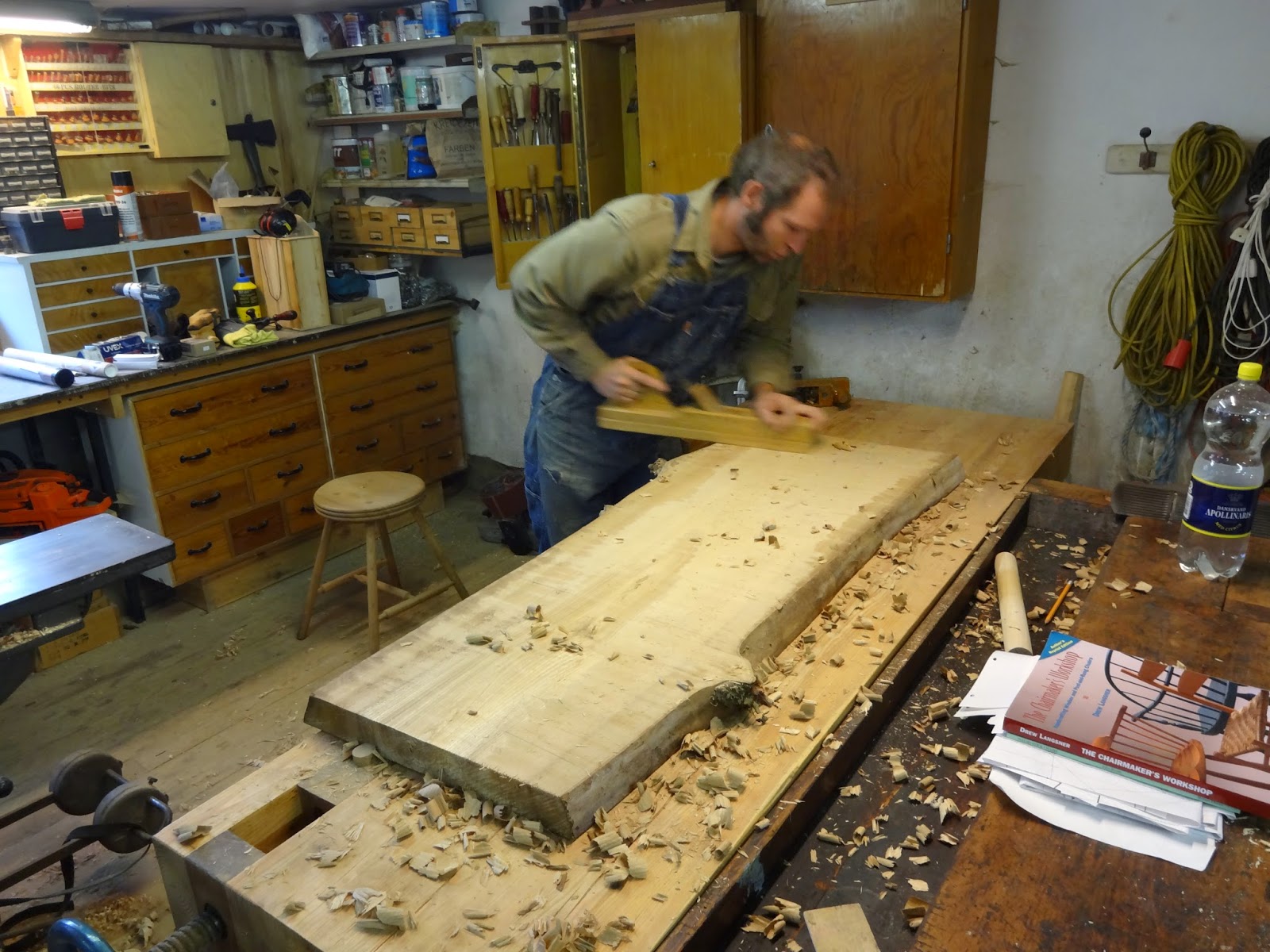 Scrub planing the blank for the seat. 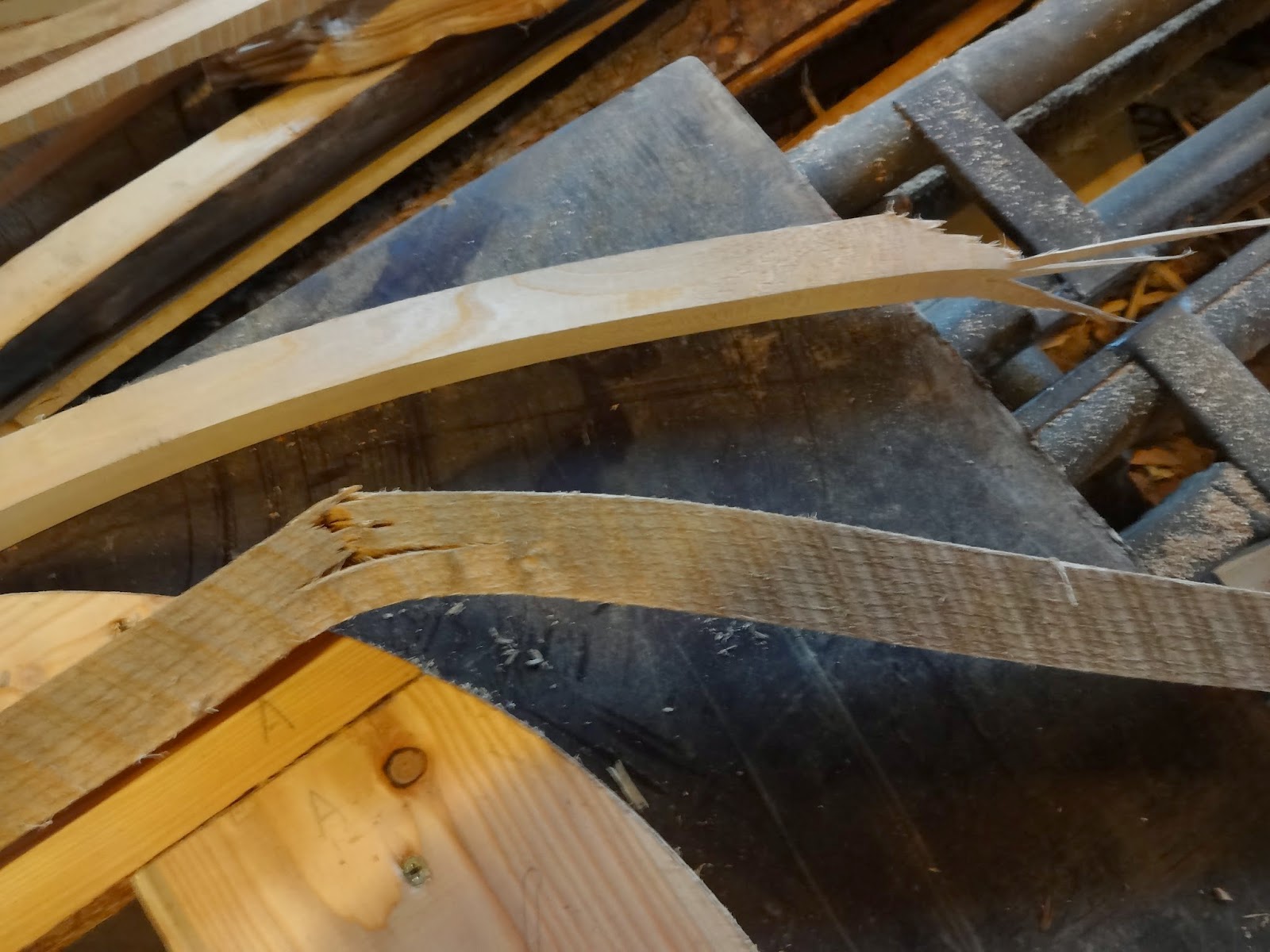 The steam bending results of yesterday. 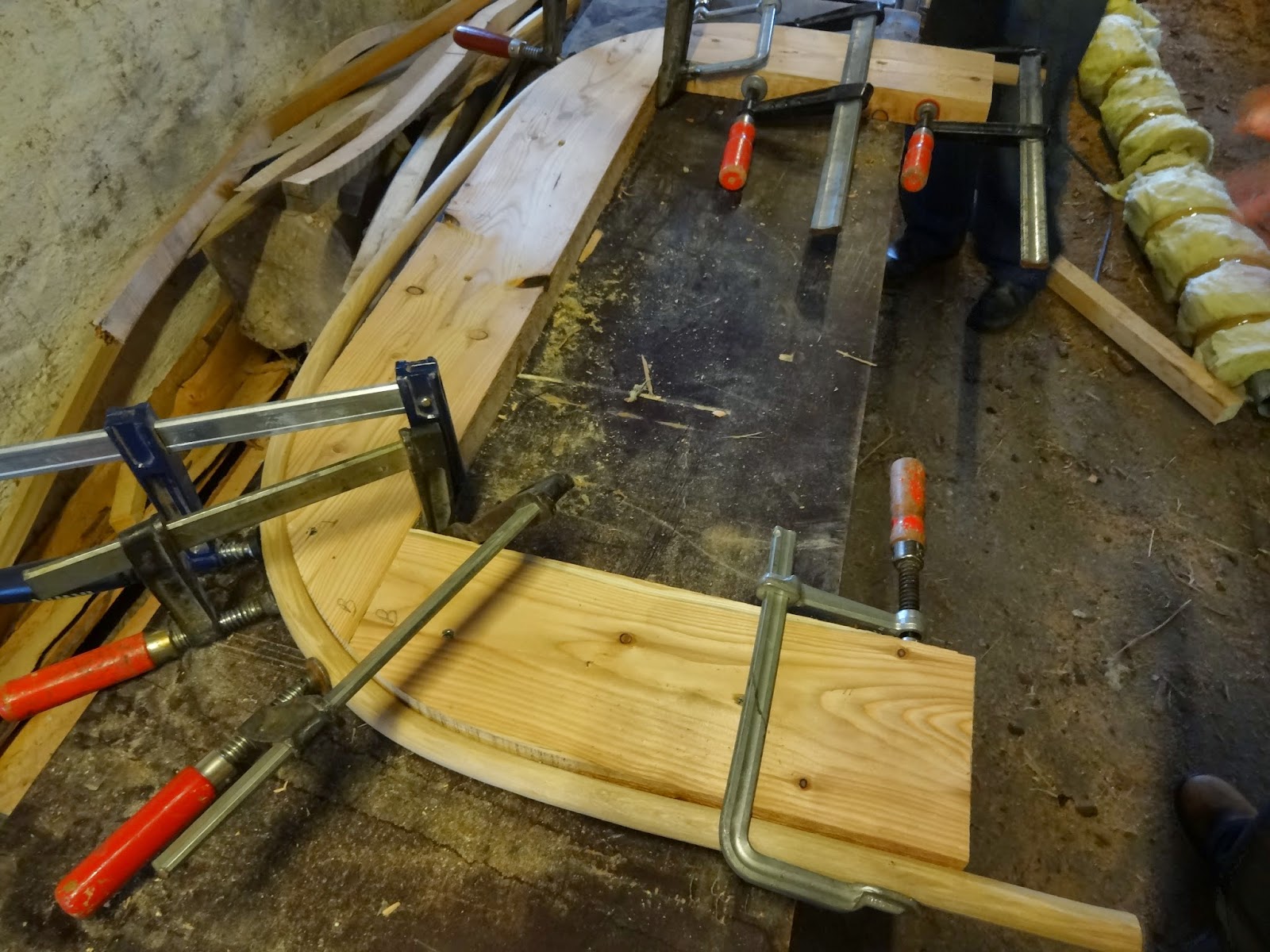 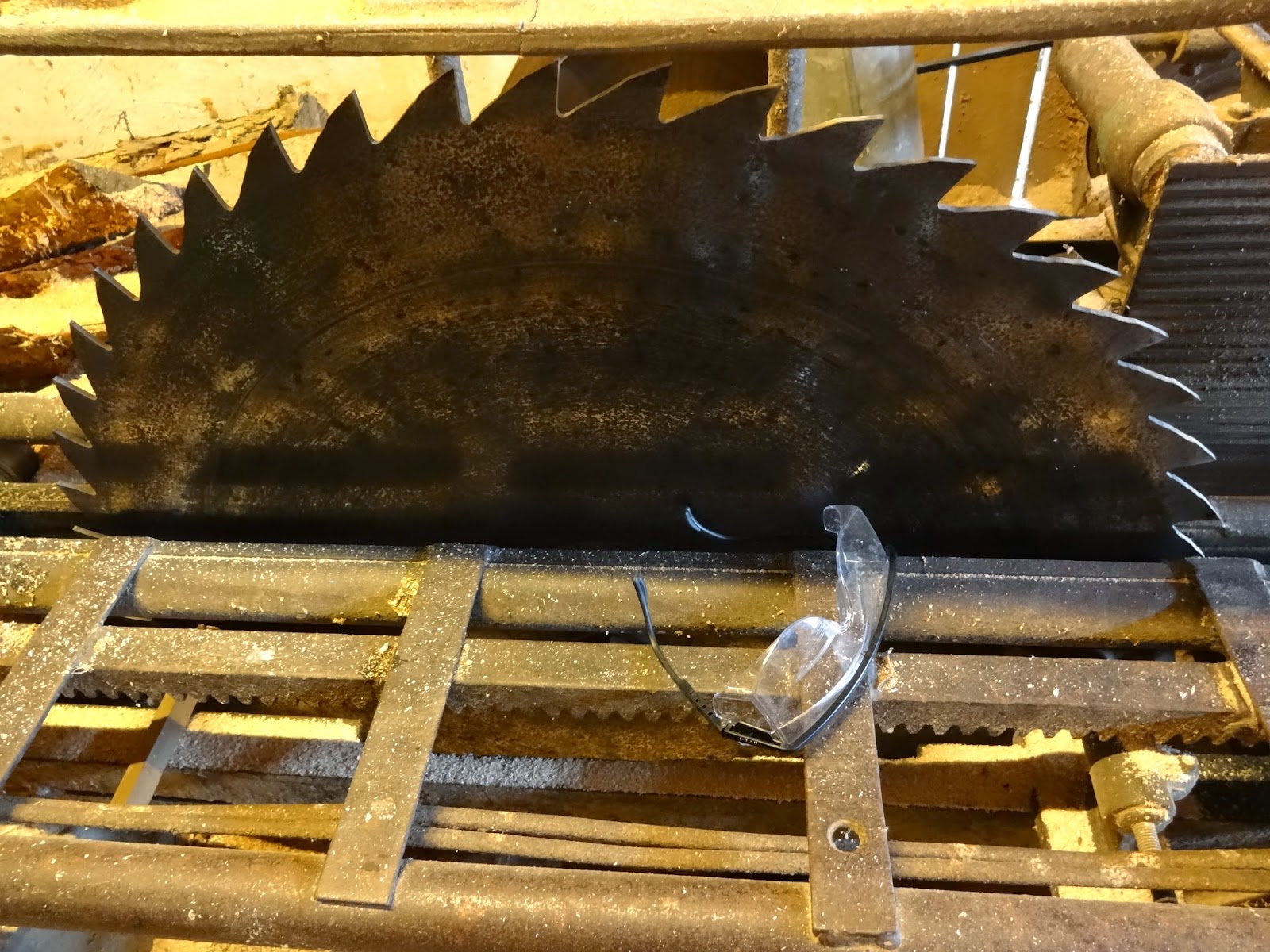 The blade on the sawmill, compare size to the safety glasses. 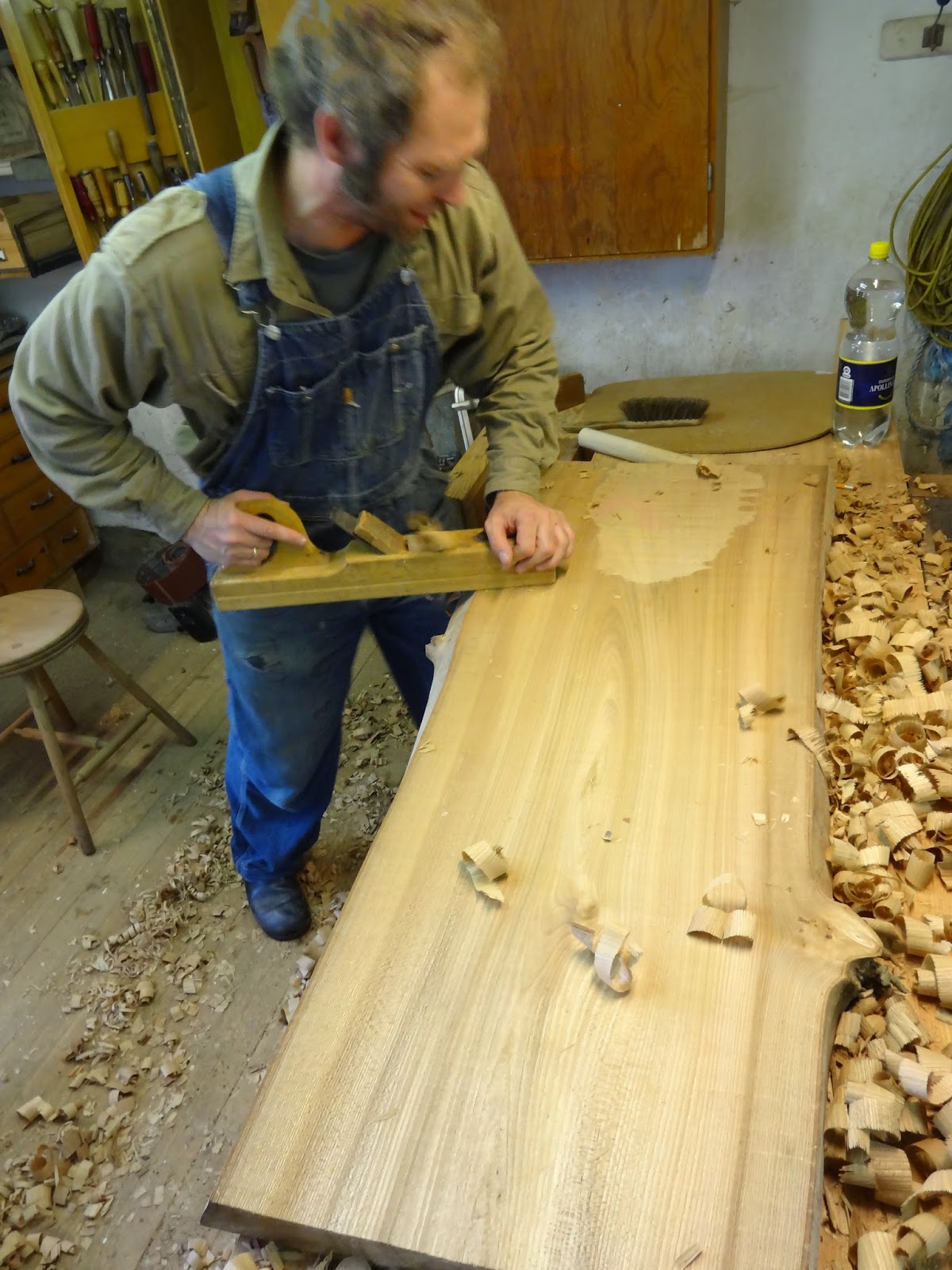 Someone needs a haircut and a shaving.. 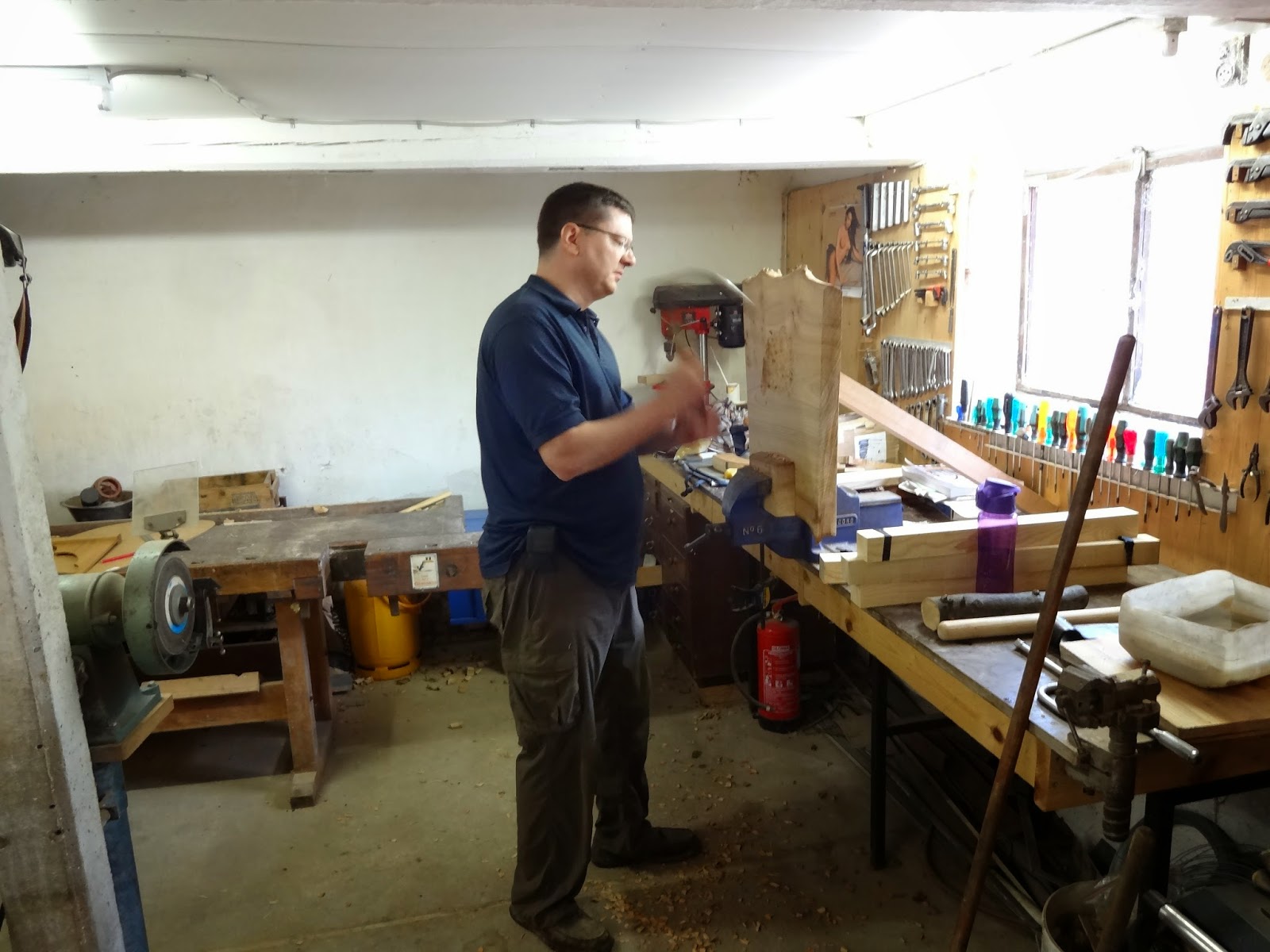 Brain professionally adzing out a seat. 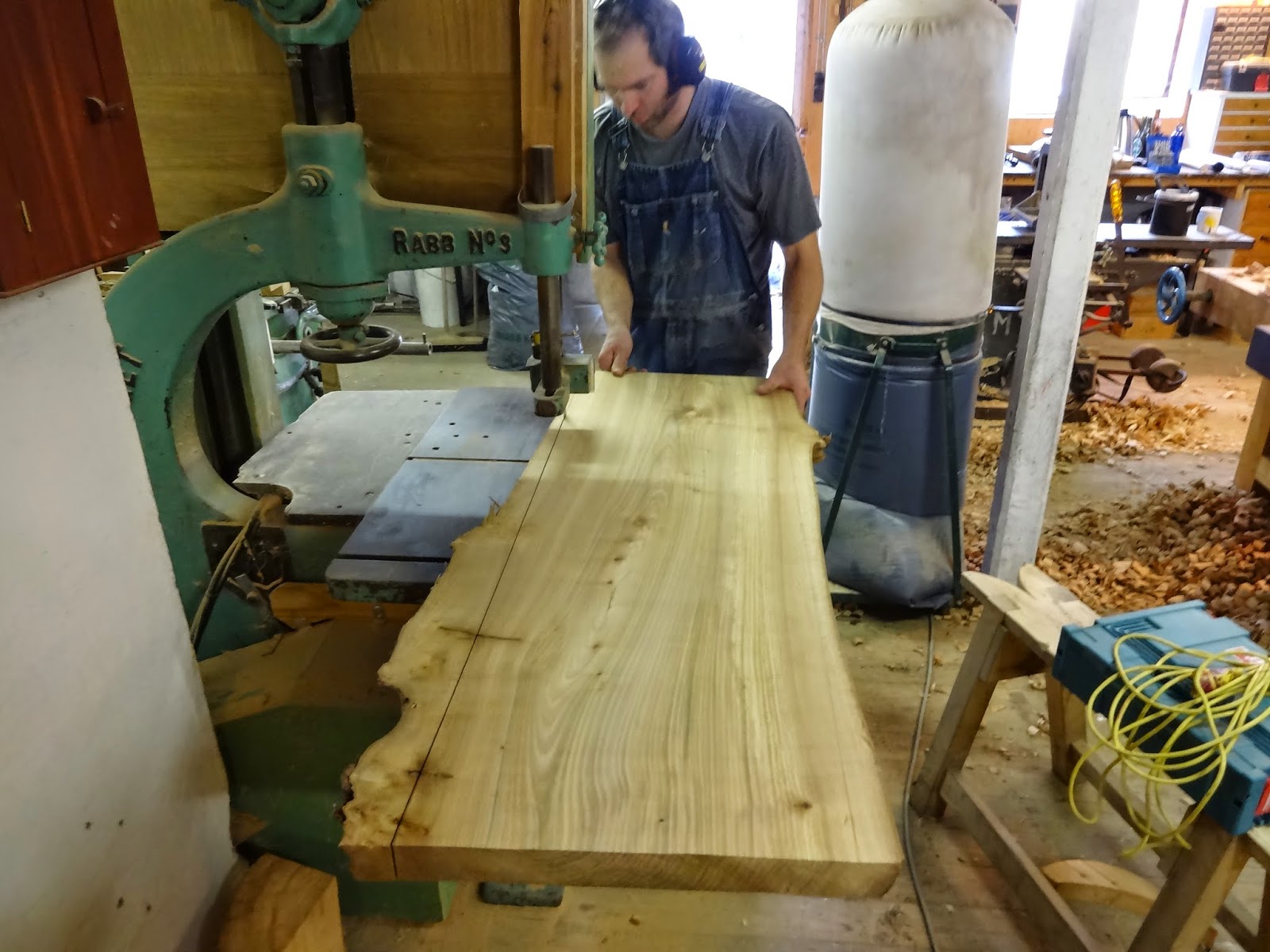 Ripping the seat blank for the settee. 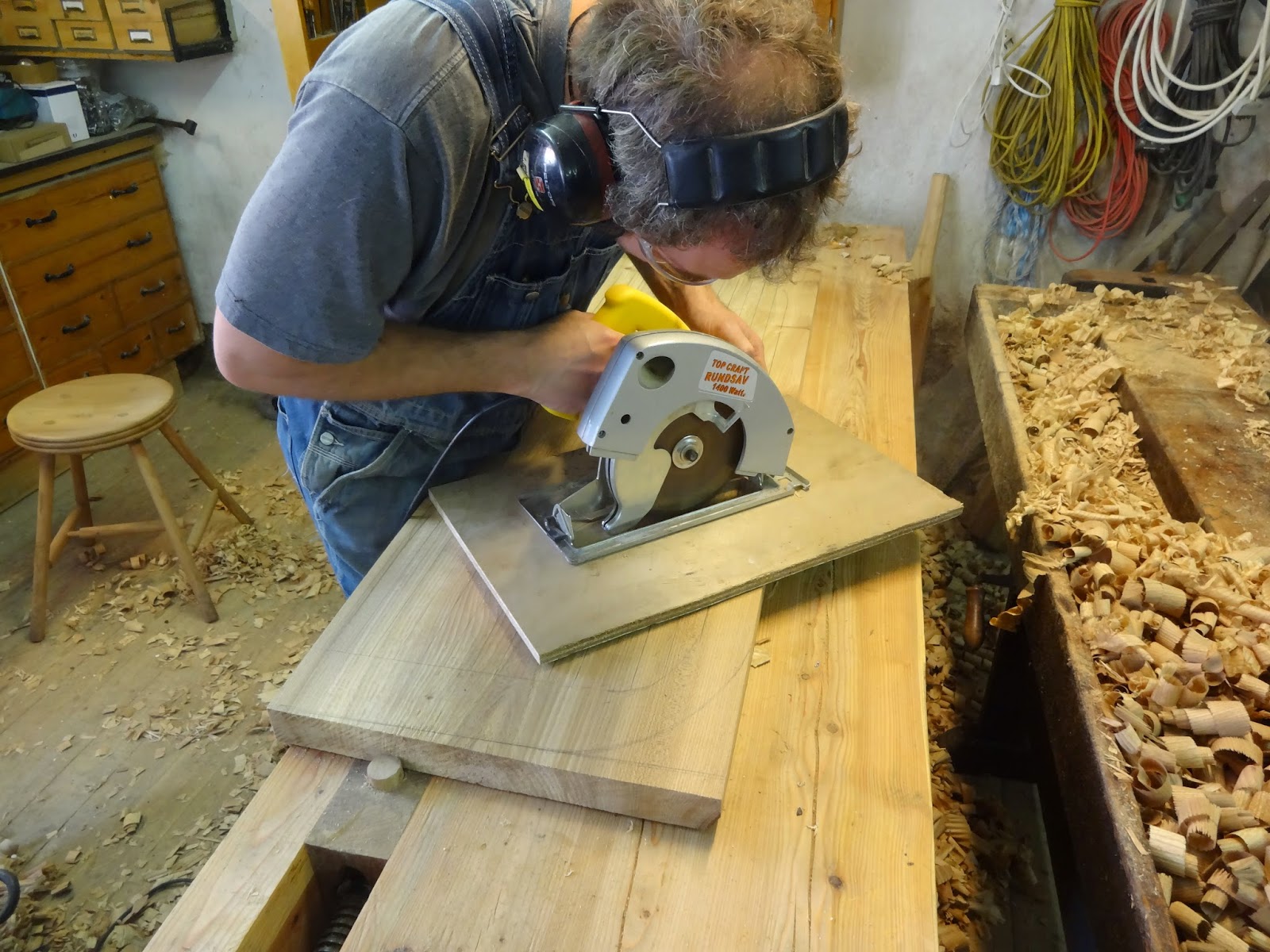 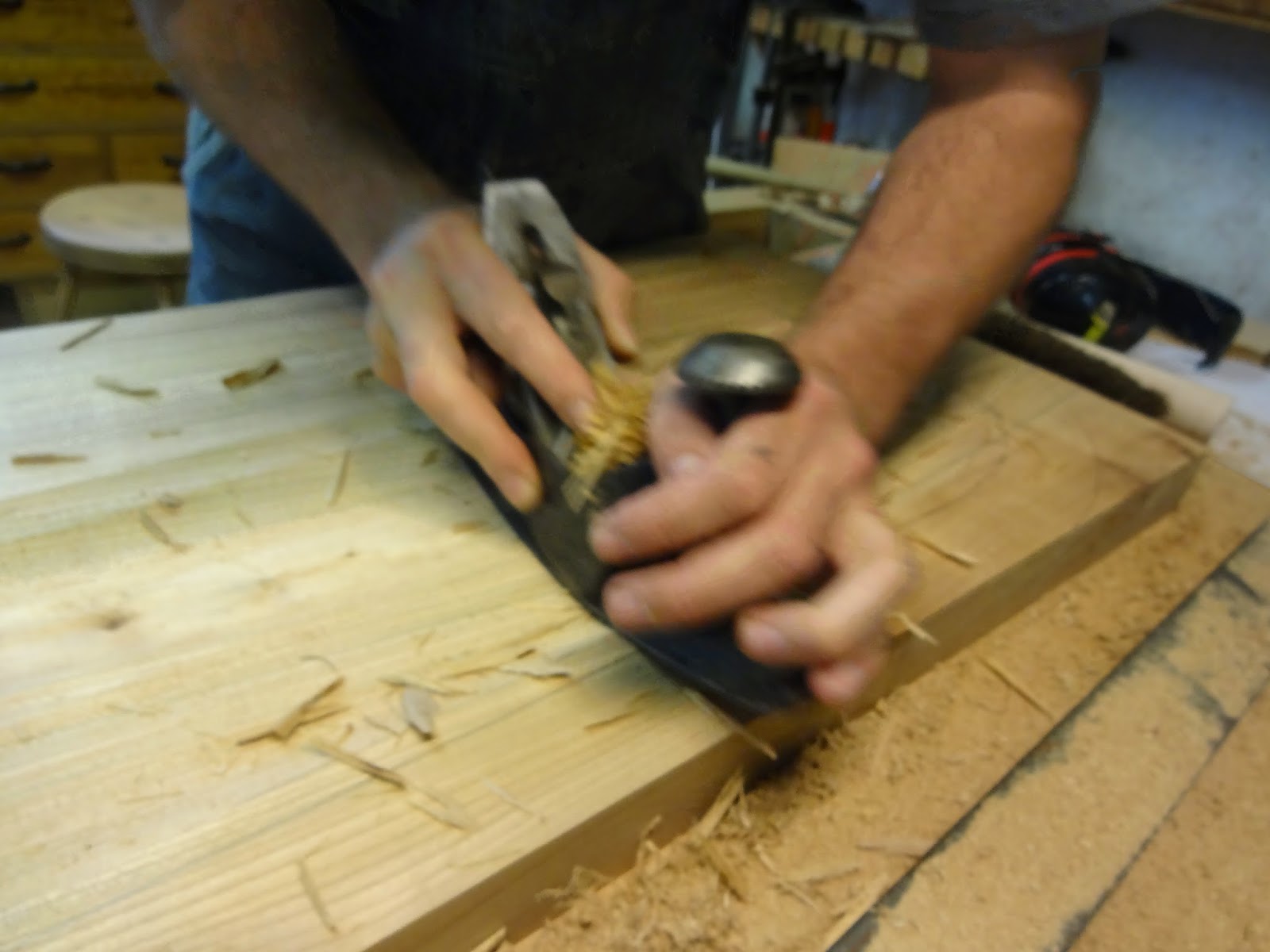 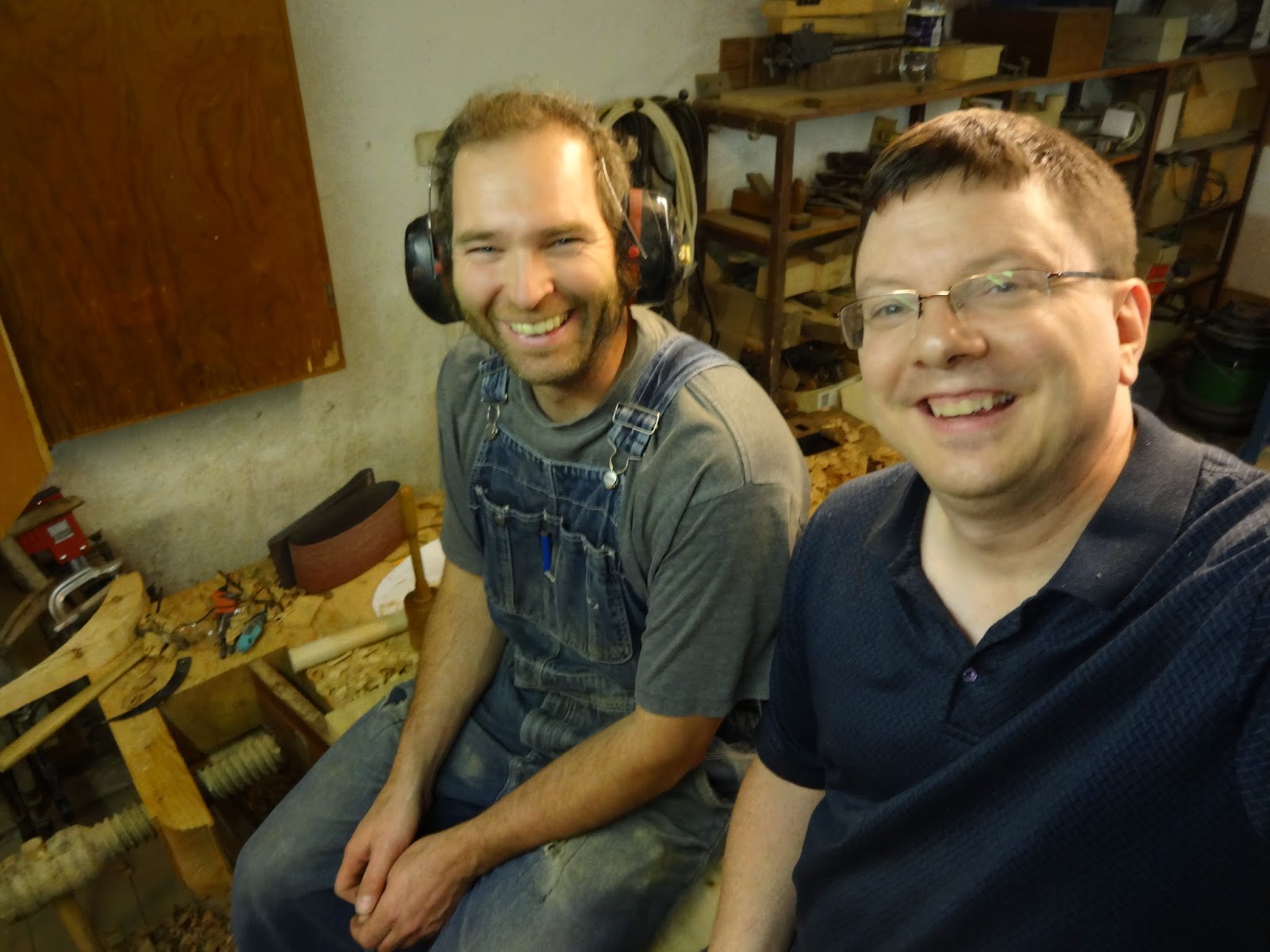 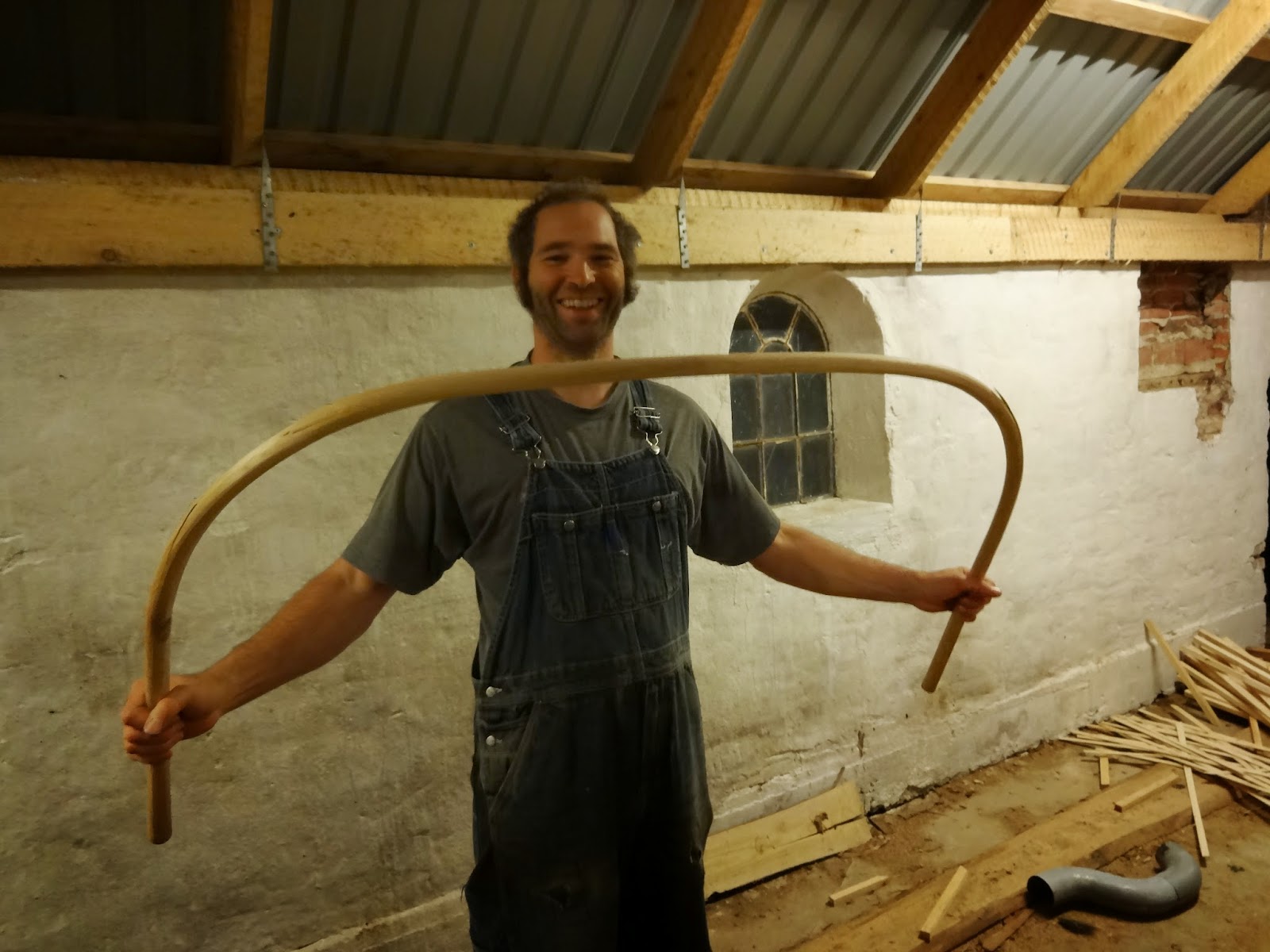 The bending straight from the form.

Brian arrived last night, and so did I. After a quick hello and a hug to my wife, we headed to the workshop for looking at the wood and each others tools.
We managed to stay in the shop until 1 o'clock testing out various tools and talking.

Today we started by bringing out the elm slabs and marking out where we could fit a sat blank. We cut those pieces out with a chainsaw. I have decided that I want to try to build a settee, so we made one blank for that too.

Next on the agenda was the procurement of some ash for steam bending. I had some old logs lying that we believed we could use.
We were a bit ahead on the schedule so we decided that we could try split the logs because we agreed that it would make the stock for bending even better.
The first log had some twisted grain, and I managed to break the handle of the sledge hammer..
We moved on to the next log and it looked better. The splitting went surprisingly easy but the grain wasn't straight on this one either.
For my settee I needed a piece of approximately 2.4 m. After some splitting with a froe that Brian brought, we broke his whacking stick.. I made a heavier model that looks like a cricket bat on steroids and we proceeded with the splitting. After spending some more time we decided that it didn't work as easy as it should and that Peter Follansbee probably had some secret trick that made his froe splitting sessions become a success. We sure didn't have that trick!
In order to be able to claim some sort of result by the entire splitting circus, we tried resawing the split piece on the bandsaw while following the grain. After some time even we couldn't pretend that this was the correct way to go and we stopped the show.
Instead we found some old boards of elm in the barn and quickly agreed that everyone knew that elm was the preferred wood for steam bending throughout the World.

In an effort to catch up on some of the lost time we started making leg blanks for everyone.
Soon after starting this another of the participants arrived: Lars Olav who is a carpenter that lives near by. He brought two really nice old workbenches with him so we totalled 3 workbenches in my shop.
We continued the leg blank work and we also made a steamer. This is made out of an old deep fat fryer and an old gutter pipe from our roof.

In the afternoon Brian started making some arm crests for his chair, Olav was considering which chair to build and I was trying to steam bend the back rail for my settee.
The first attempt broke, but we decided that the dimensions were probably too large to start with.
So I found another piece of elm that was even more straight than the first. This was squared up to 3 cm on each side (1.25"). The stick was steamed for an hour and a half. But while bringing it close to the bending form it also broke.
I still have one more piece of elm that I want to try steam bending tomorrow, and if that is not a success, I'll have to find some long piece of ash instead.

Please make sure to visit Brian's blog: toolerable.blogspot.dk where you will also find a description of today's build. 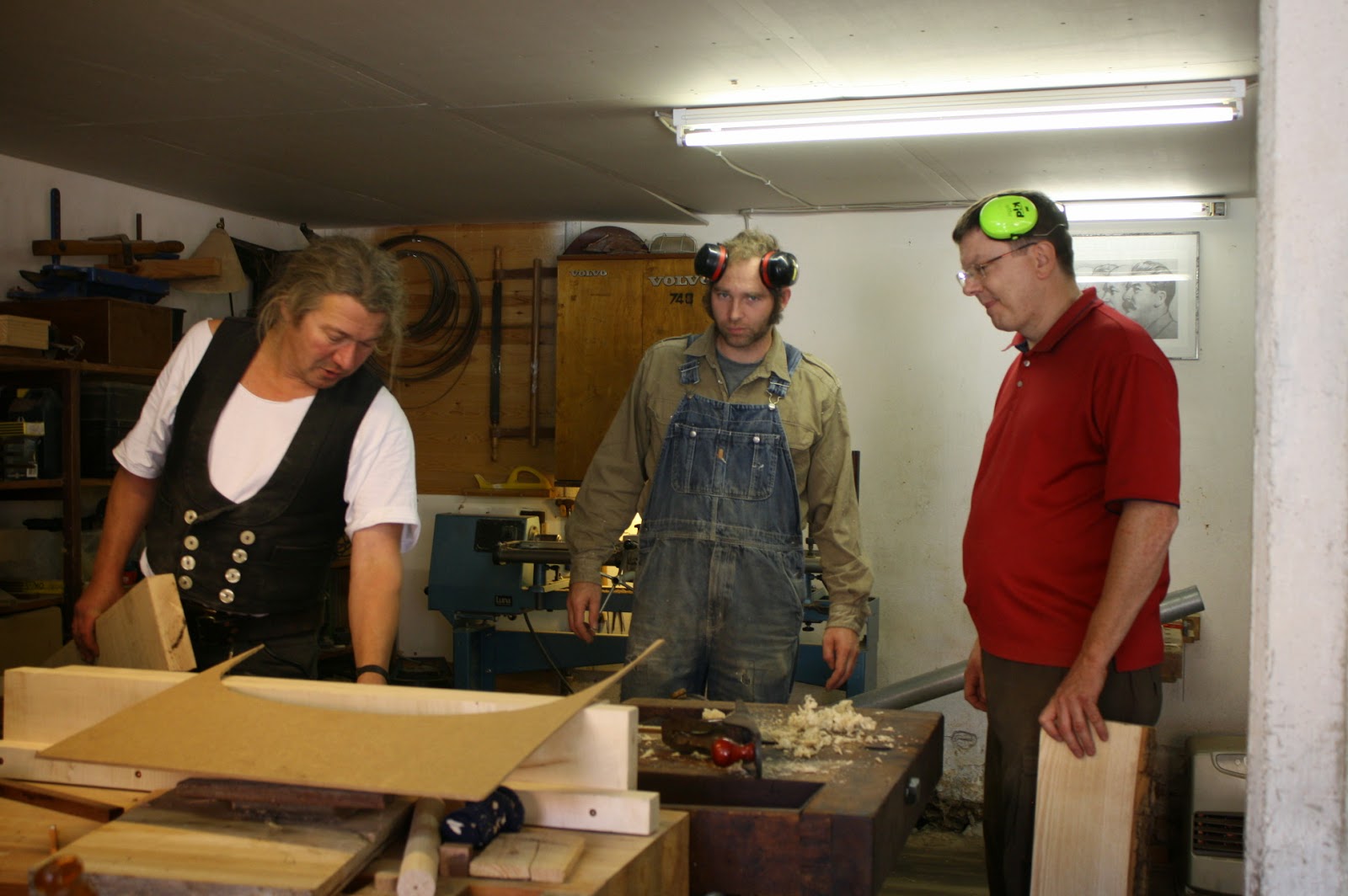 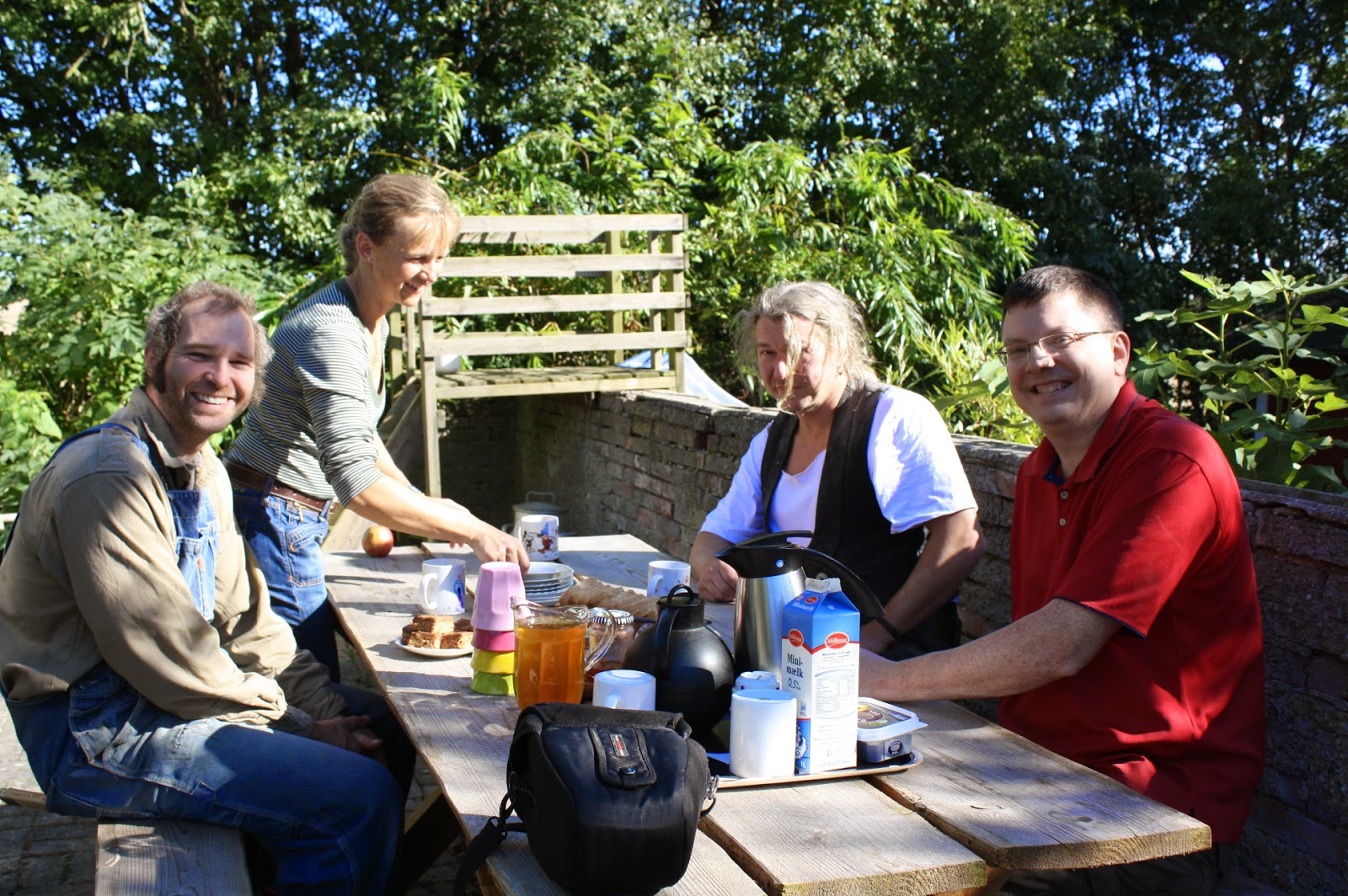 Afternoon tea + coffee in the garden. 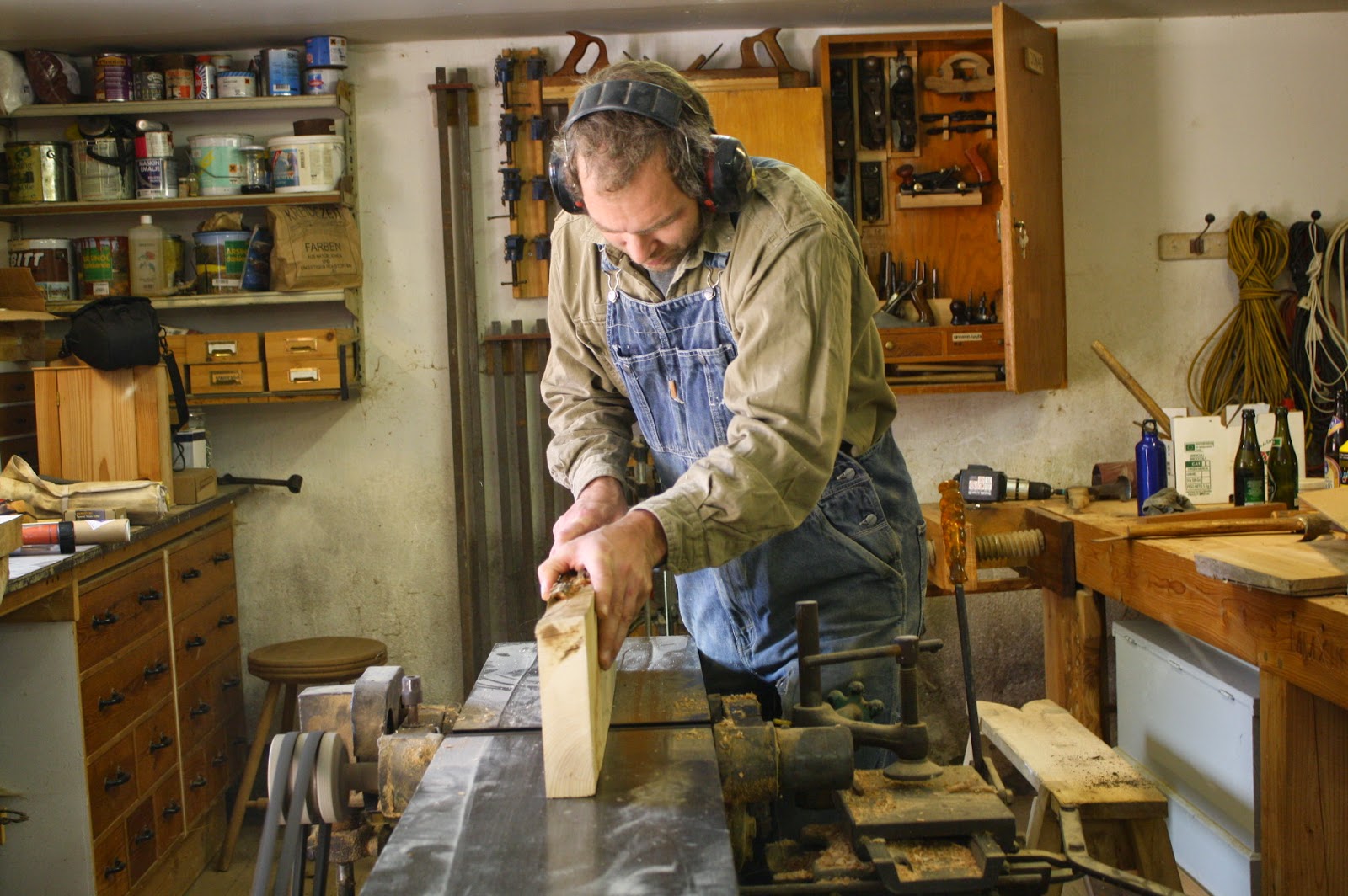 Jointing some ash on the edge 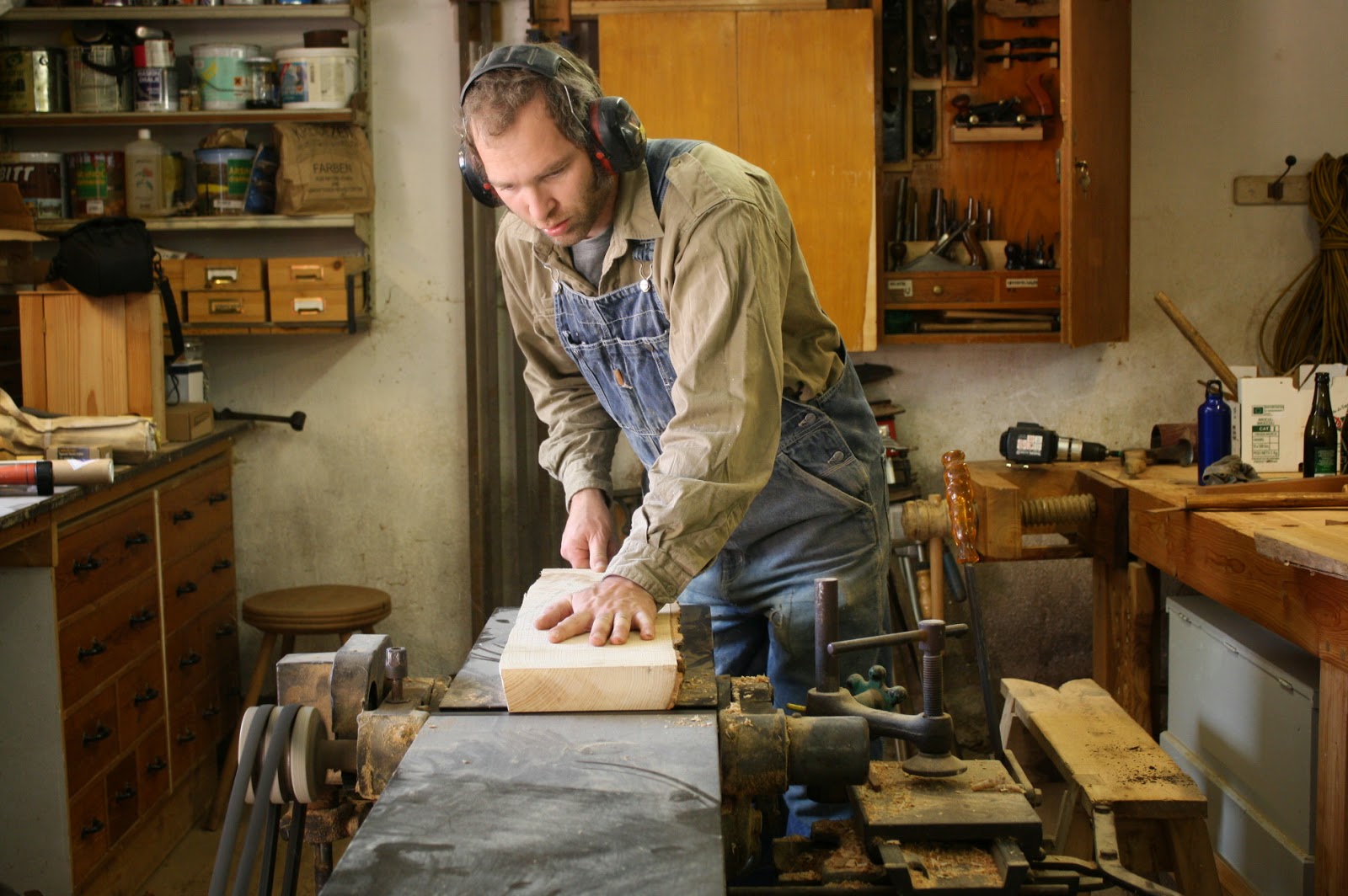 And jointing some ash on the side. 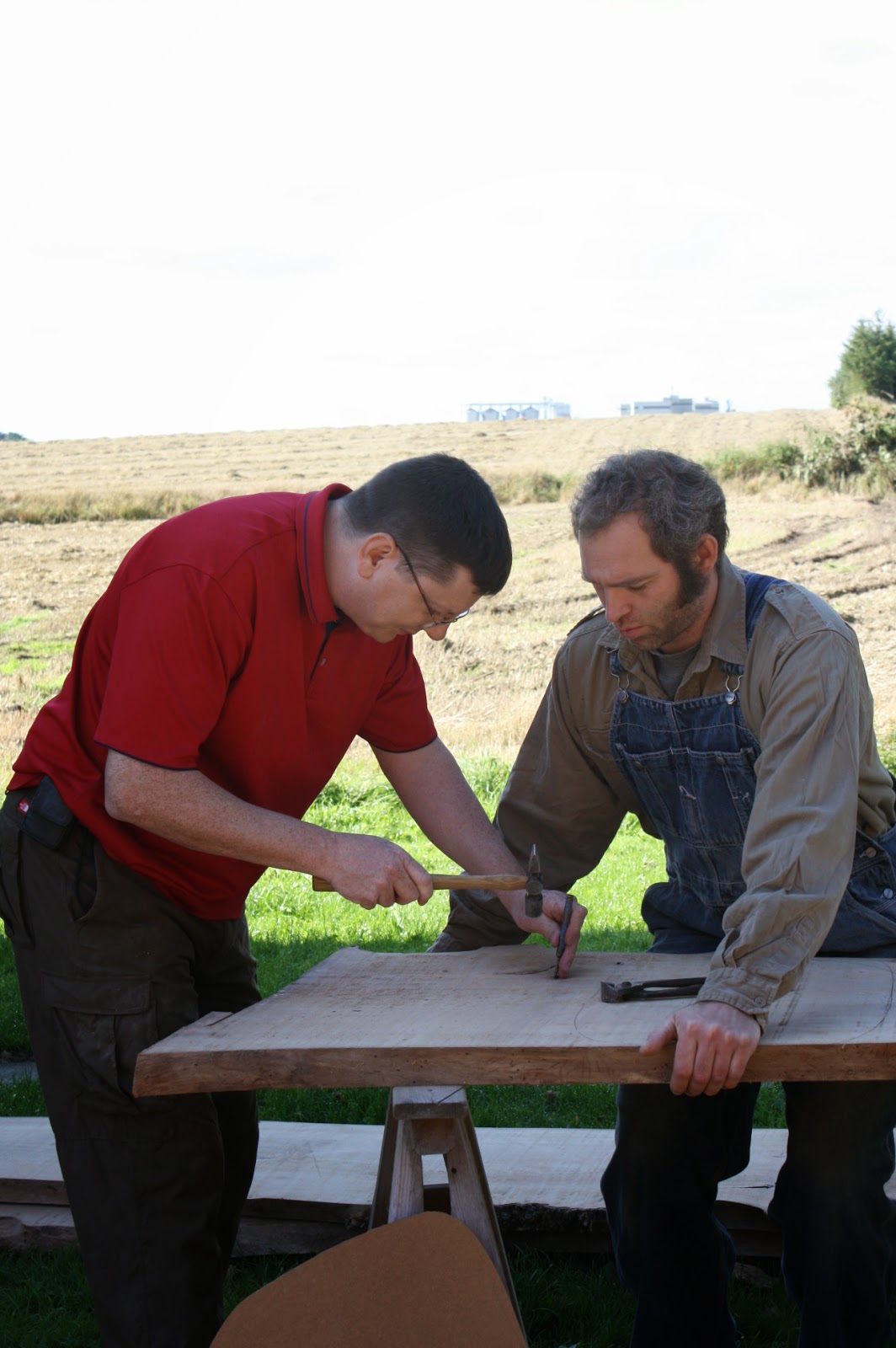 Removal of some old piece of barbed wire.