A small shelf and a small passenger

Despite my lack of energy concerning woodworking this trip, I made a small project yesterday.
We have had the need for a small shelf for as long as I can remember, but we didn't have any wood that wood look just remotely OK. I am not a fan of making shelves out of plywood when it is something that is intended to be in a public space. In a workshop it is fine, but after all this is not just our working place, it is also our home for half the time, so it shouldn't look too bad.

Yesterday the electrician came in and said that he had found an extra table top in a stores room. Apparently it was designated for a table that was never built anyway, so we immediately decided to use it for the shelf.

The job itself was done by reducing the size of the plate by means of a handheld circular saw, one that I didn't know that we had on board.

After making the top of the correct size, I attached some mounting sticks below it and finally screwed onto the wall.
So no we have a tea drinkers shelf complete with a kettle and some tea. Before we had to share the space with a coffee machine and some coffee.

The small feathered passenger looks like a pigeon. It has got a ring on one of the legs, so maybe it should actually be on its way to somewhere. I have no idea if it has lost its way or just needed a break, but it landed on our deck this afternoon, so we have been feeding it with some bread and have given it a cup of water to drink from.
It seems fairly tame, since it doesn't panic when we go to the deck. Anyway, as long as it behaves it is welcome to get a free ride.

Have a nice weekend 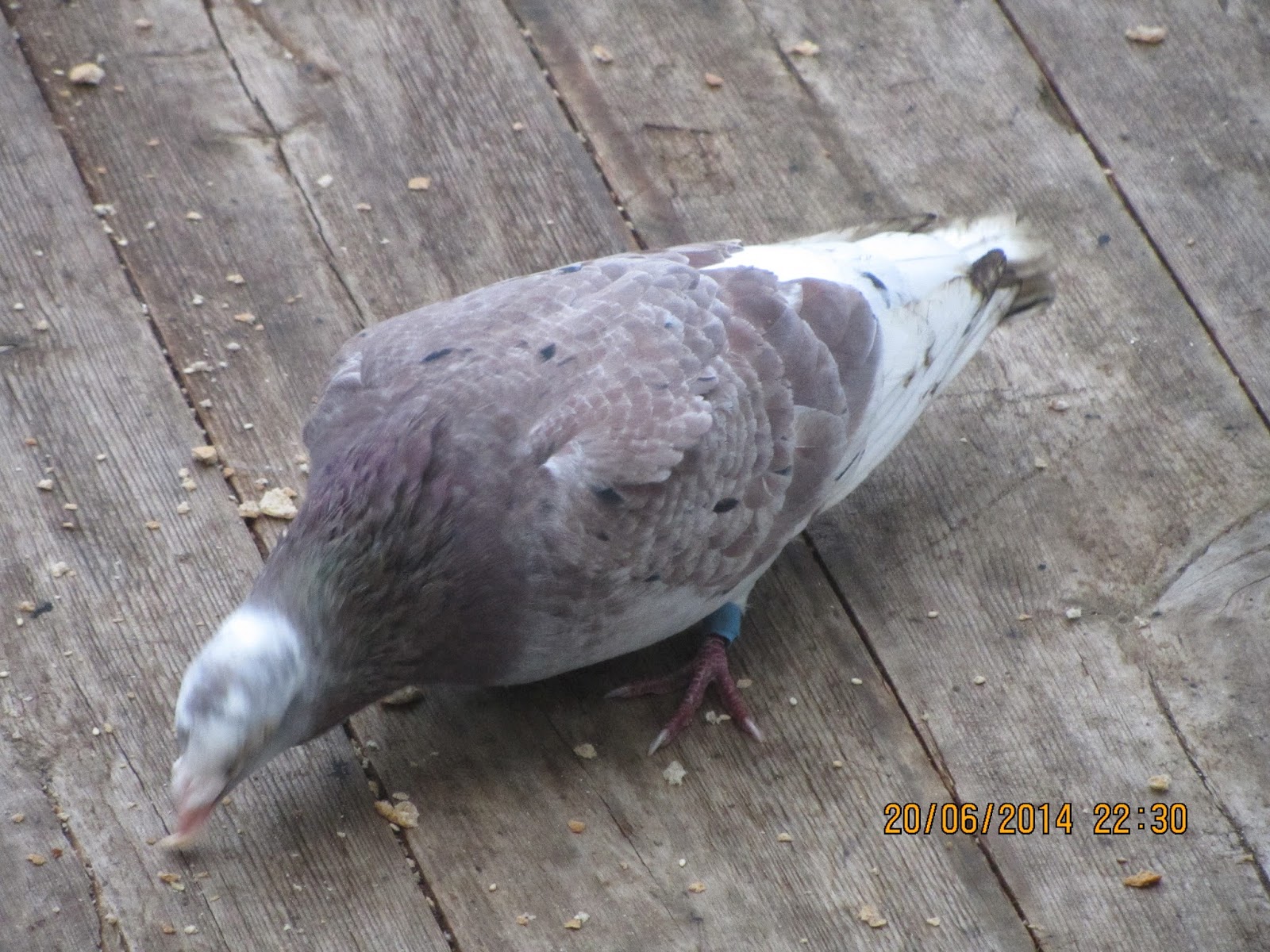 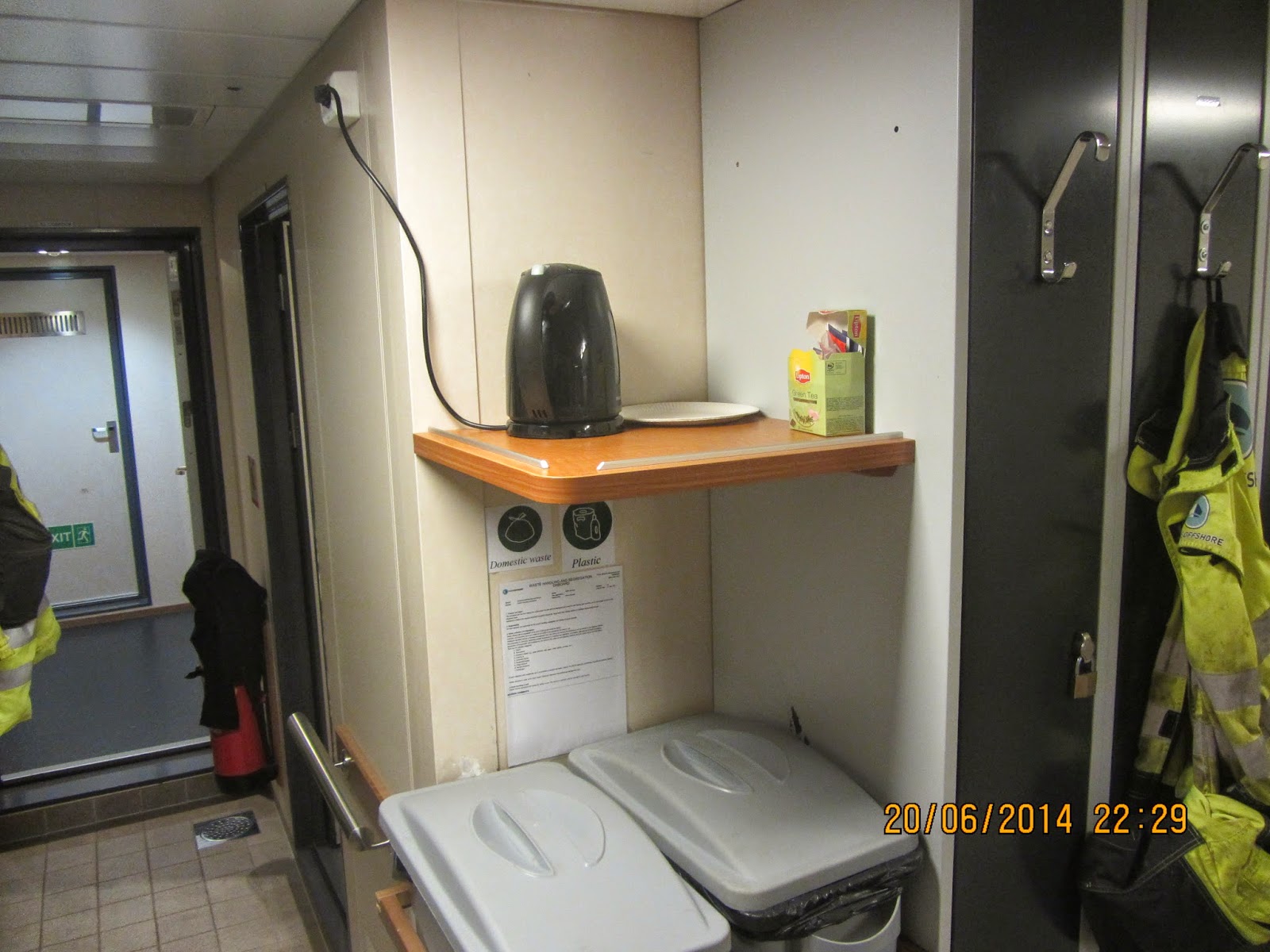 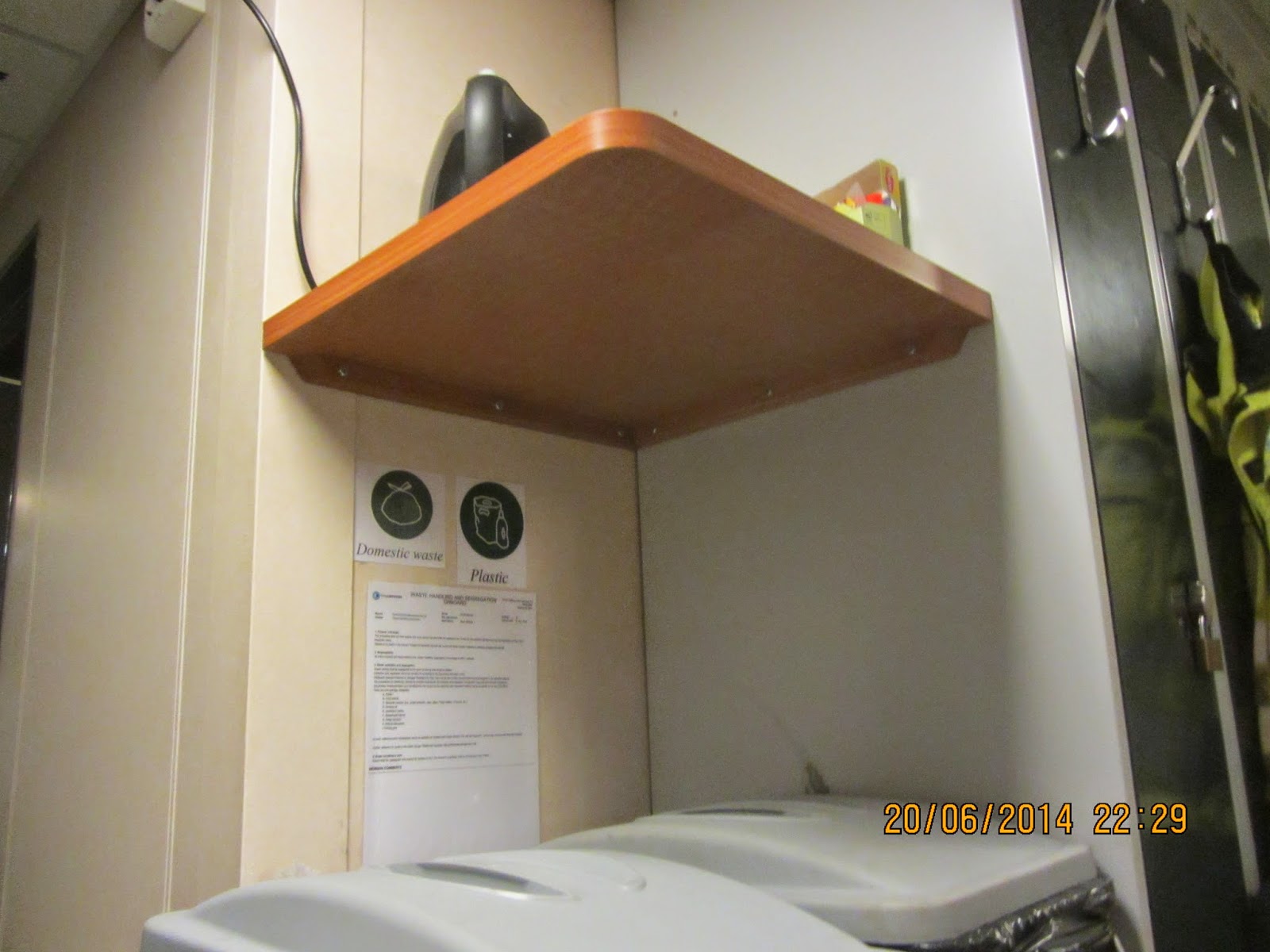 The tea shelf from the underside.

I can't decide what to build for my next project.

I have been a little low on the energy and inspiration side when it comes to finding a suitable project this time.
After chatting with Brian Eve from Toolerable, I was eager to try to build a Rorkhee chair. It seemed like an appropriate challenge that didn't require too much wood, and the thing could be brought home in the airplane as well.
I tried to see if I could find some wood that would be fitting for this project, but sadly I don't have any thing that will make a good chair. I have a few small thin boards of some oak (from a pallet), but the only wood of a larger dimension on board are some construction grade spruce boards.
My thoughts are, that making a chair out of that will be a waste of time and energy, and I will be angry when the project fails due to some wood that is not strong enough. So I guess that I need to find some other thing to build. I'can always make a Rorkhee at home some time.

A folding camp stool would be a nice thing to make, but the same problems concerning the source of wood applies to that project. Maybe I will make a triangle bolt or two to bring with me home, that way I can have a head start when I decide to build a stool in the future. My idea is to make a triangle bolt by hard soldering 3 bolts together, so the legs of the camp stool can get very close to one another.
Chris Schwarz once blogged about a Roubo stool that looked like that.
Maybe it could be a fun project to make with the children?

Asger (our youngest son) has developed a keen interest in steam engines. That could open up for some interesting projects.
I have considered building a split demonstration model of a steam engine to better explain the working principles to him. That doesn't require a lot of wood, and it shouldn't be too hard. After all, the various parts doesn't have to be steam tight.

Yet another possible project is to build some sort of machine or contraption that can be driven by his steam engine at home.
E.g. a conveyor belt, a small crane or something along those lines.

But so far I haven't advanced past the sketch and dream phase of any of the above mentioned projects.

Do you ever find yourself in a similar situation?

Yesterday, I made a lower skirt for the tumblehome sea chest.
I like to change the orientation of the dovetails for the lower skirt, so it can better resist the outward thrust of the bottom, if it should expand at some time.

A great advantage of fitting skirts to a canted chest is that the further down you press the skirt, the tighter the fit will be.
I took a critical look at the surface of the chest itself, and it doesn't look very good. The spruce I have used was definitely not furniture grade, so I am convinced that I will paint the chest once it is done.

While waiting for the skirt to dry, I glued up a panel for the lid.
I figured that a small experiment wouldn't hurt, since the chest isn't designed for anything special. So Instead of my usual floating panel type lid, I decided to go for a flat panel with nailed on battens to prevent it from warping.
I dovetailed two battens to a piece of wood that will act as a front dust seal. After the glue had dried, I mounted the assembly on the lid.
I glued the front dust seal piece onto the lid, and then I reinforced it with some clenched nails just to keep on experimenting.
The two battens were attached with clenched nails, but no glue. My theory is that the front piece will stay put due to the glue and the nails, and the nails holding the battens will prevent the lid from warping, but still be flexible enough to accommodate seasonal movements.

The lid is secured with a leather strap which I took from an old bridle for the horses. I punched a couple of holes in it, and mounted it using some brass screws.

Before painting the chest, I decided where to put the lifts, and I made pilot holes using an awl.

I couldn't make myself use the milk paint which I bought two years ago in Germany. I haven't been able to locate a dealer in Denmark, and I didn't want to risk waste the paint on an experimental chest like this one made out of crappy wood.
I looked at my shelves and found some machine enamel in the RAL colour 6011 (Reseda green / Hannover Green). It is produced in Denmark by a company called Esbjerg Paints. and I figured that if it can stand up to agricultural machinery, then it will be OK for my chest.
The red colour is Swedish red wood protection from the same company. I used it for painting a door on the backside of the barn a year ago.

After letting the paint dry for a couple of hours I estimated the paint to be at least dry enough to allow for mounting of the lifts.
The mounting itself went suspiciously easy, so maybe I am having a lucky day.

All that is left is to present it to SWMBO and see if she would like it in the stable or inside the house.
I think it might end up in the stable, since we need a new box for curry combs, and this chest will be perfect for that. In addition it is very stable and can be used as a small platform for standing on, when the hair of the horses needs to be groomed and braided before going to a contest. 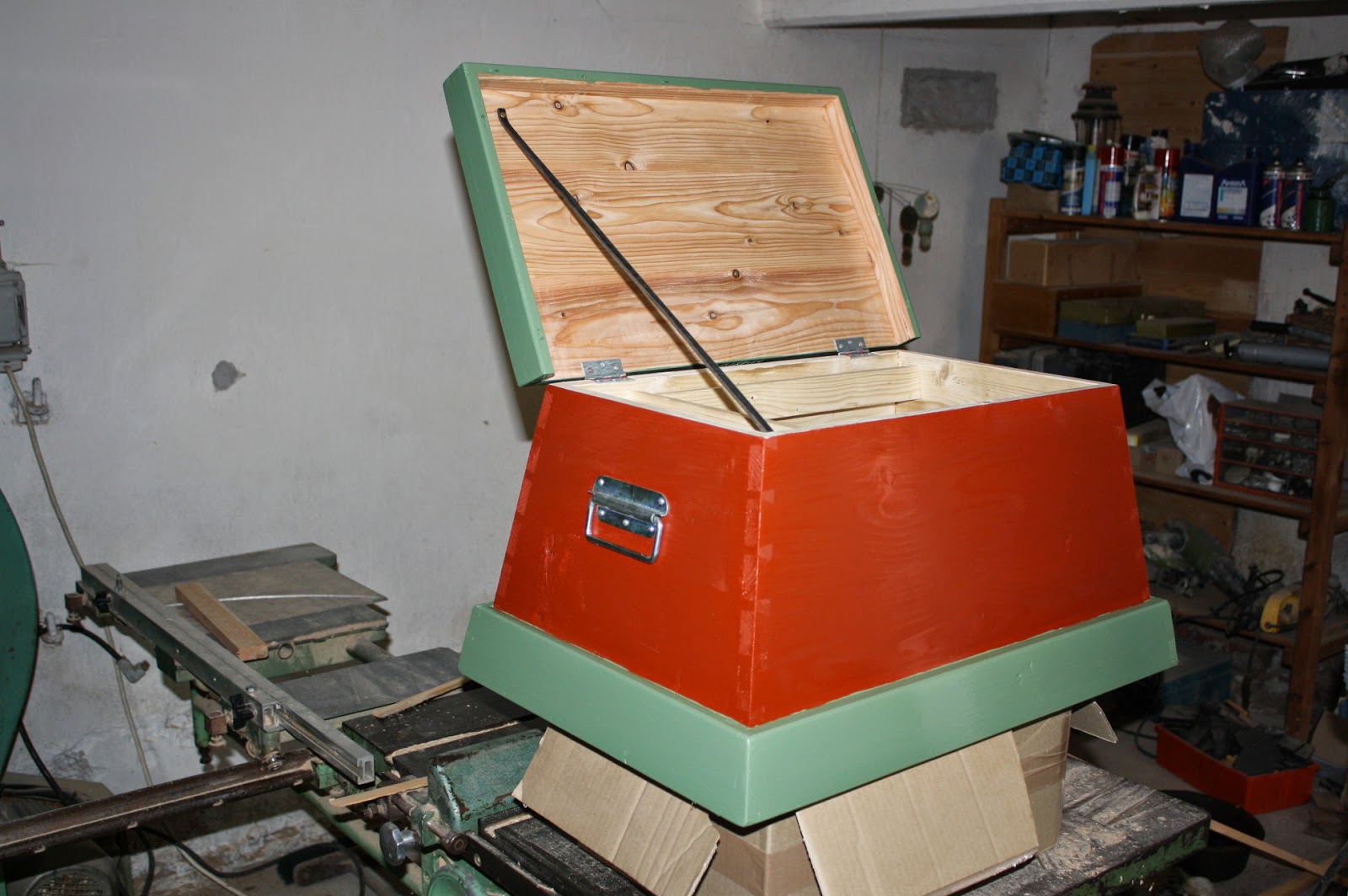 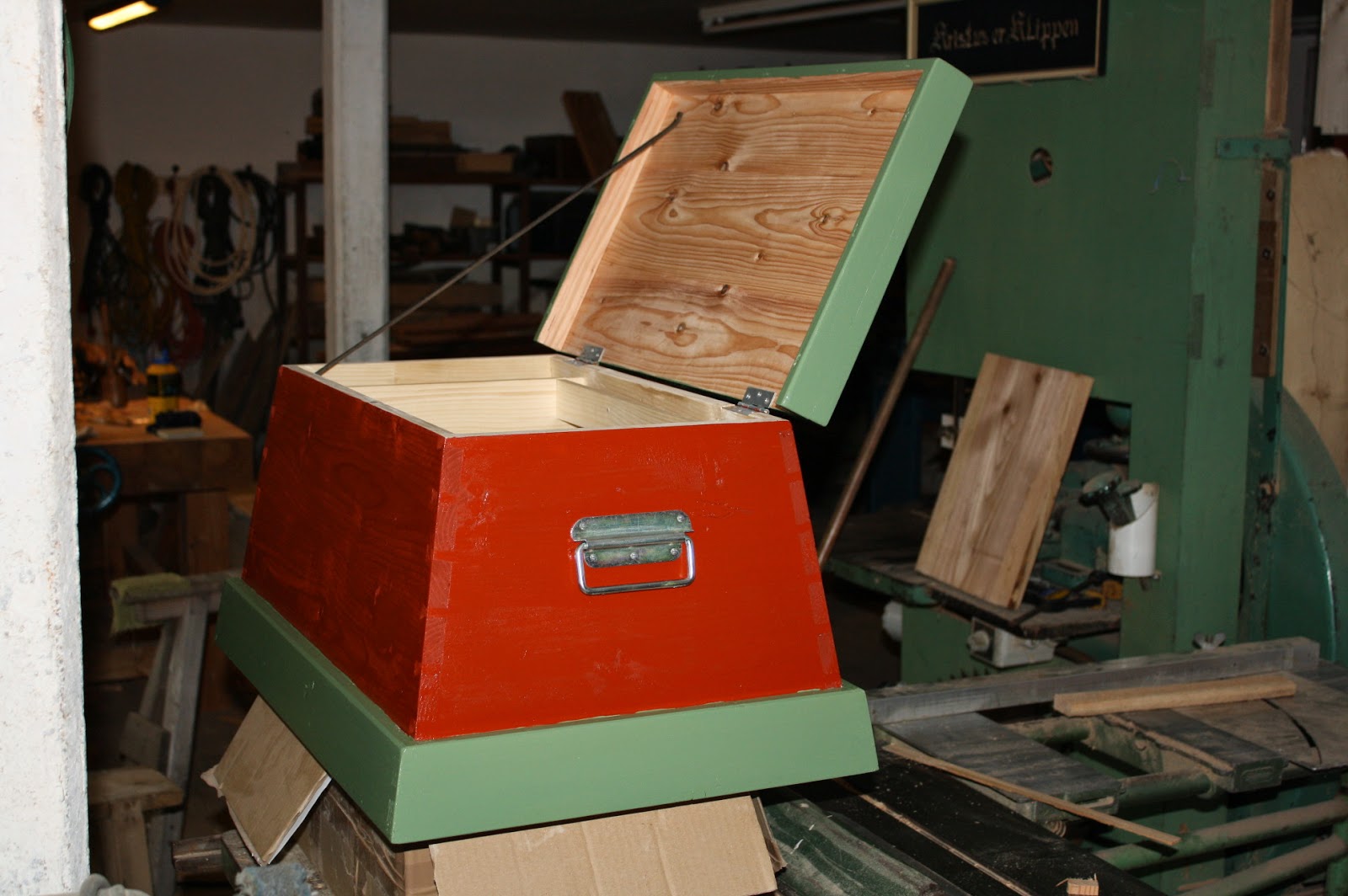 View from the other end of the chest. 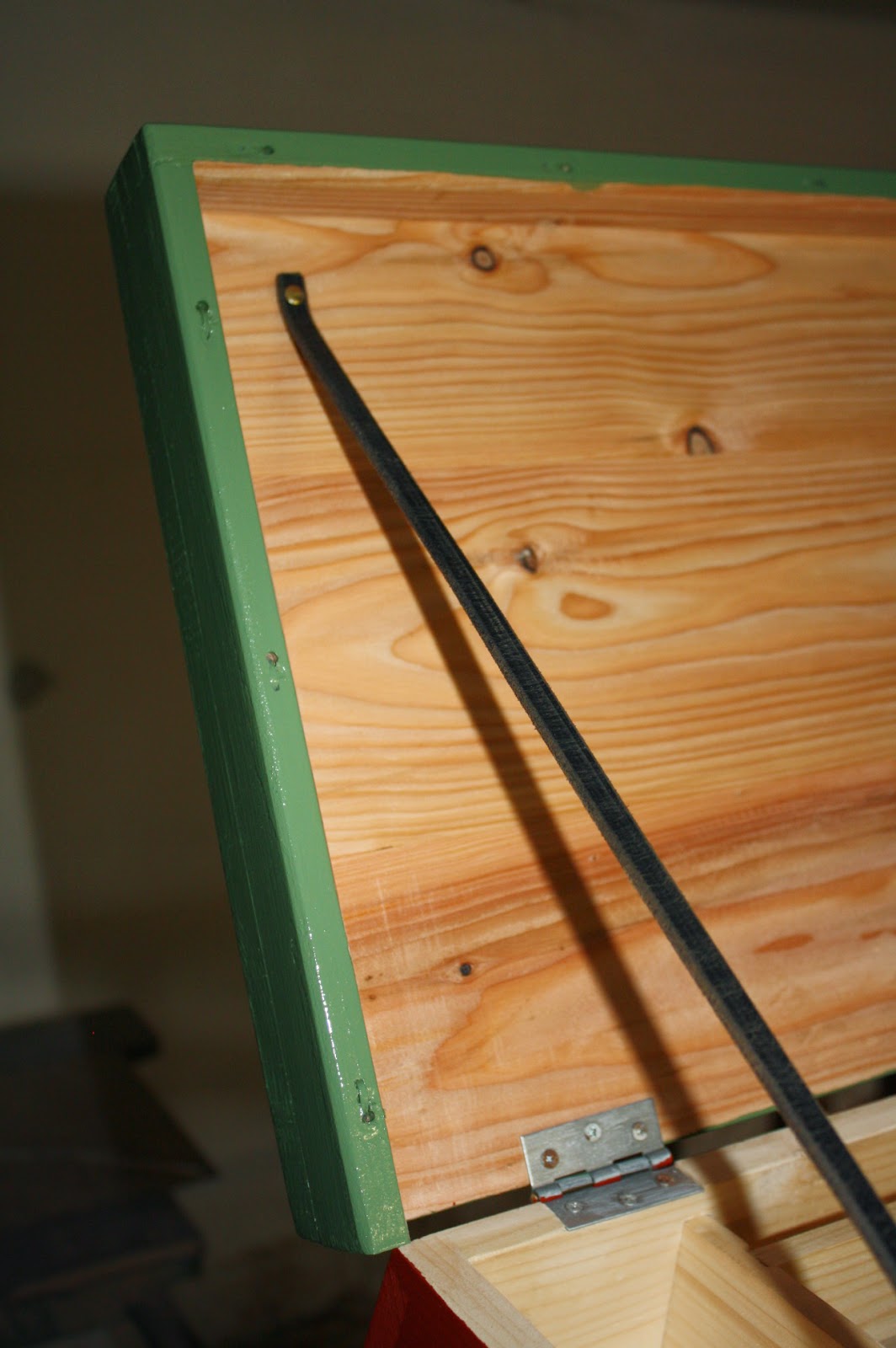