Danish Chairbuilding Extravaganza 2018, what to build.

There are approximately 9 months left before the third bi-annual DCBE is scheduled to take place.

While it is still a bit too soon to start clearing out the shop and make ready for the event, it is by no means too early to start contemplating on what we should build this time.

The first DCBE was aimed at Welsh stick chairs, and the second event saw all of us making Roorkhee chairs.

All making the same kind of chair gives a possibility to make some sort of stock ready, and it is easy to help each other on the way, since all have to do the same things.
The other approach, where only the general guideline is suggested, is interesting in another way, because there are so many different ways to do things, and it will be much more up to the individual participants, what they would like to build and how to do it.
We have also discussed the option of employing steam bending as a theme, so that we could all get bit of experience in that. Then it would be up to each person if they wanted to utilize that in their design.

I think that I will try to suggest that the DCBE 2018 will be an event in which each participant can build whatever he desires. As long as it is some sort of furniture aimed at being used for sitting on.
I will try to make some chair blanks etc. made ready, so that anyone wishing to make a Windsor or welsh stick chair can do that.

A rocking chair could be fun to make, either a classic model using rockers made out of wood, or experimenting with a renewal of the platform rocker design using springs.

Ever since I saw a picture of Ray Schwanenbergers immaculate sack back nanny rocker, I have wanted to build one.
We aren't planning on getting anymore children, and given the age of our own children, grand children are still a long long way out in the future. But that would potentially give me the time to complete the piece before it is needed.

So as you can see, there are still some things that aren't quite decided yet.

I am certain however, that we will organize the food the same way as we did last time, with a catering company, as that was a great help.
We will probably have to increase the intake of pastry by visiting the local bakery a bit more, but that shouldn't be a problem given that we all work very hard - so the extra energy is needed.. 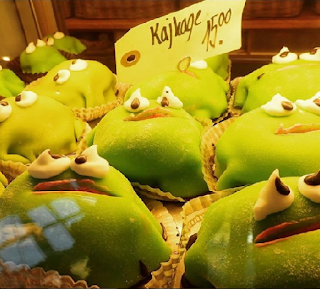 I talked to Asger on the phone today, and he told me enthusiastic that he had had his first lessons in sloyd.
He told me that they had to choose between 3 different projects which was OK, but what he didn't think was OK was the tools that were available to them.

It is not that Asger is a tool snob who can only use a Lie Nielsen plane or a Two Lawyers backsaw etc.
But he expects that a chisel is sharp, a plane is sharp and a saw should surprisingly also be sharp in his opinion.
He was really frustrated discovering that the tools were all dull.

I know that the budget for classes such as sloyd is so limited that it is hard to do anything. The allowance per student doesn't really leave room for investment in any new tools.
And the teachers are only given a bare minimum of hours for preparation, and those are not nearly enough to cover a sharpening of all the chisels or planes etc.
It annoys me, because I know that most schools will still spend an enormous amount of money each year on IT equipment such as new computers or printers etc. And no one expect a computer to hold up for as long as a chisel in matter of years.

I told Asger that if he wanted to, I would be happy to find some tools that he could bring with him to use in the sloyd class. A couple of chisels, a small plane and a saw that actually is sharp.
He wasn't sure about it, but he thought that he would ask the teacher if she was OK with it.

He was worried that the other kids might suddenly become aware of how crappy the tools of the school were, if they suddenly tried a sharp chisel, and then they would perhaps prefer to borrow his tools instead.
A sad thing about crappy tools in such a place is that it might cause some of the kids to become disappointed with woodworking, because the result in no way resembles the effort put into the project by them.
If they try really hard, but are held back due to dull tools, the final result might not be as fine as they would have liked it to be, and that could potentially keep them from thinking that woodworking or any other handmade activity is fun.

I would hate if the teacher felt that sending tools with Asger was a critique of her job, because that is not my intention.

I know that in regular class each kid is expected to bring his/her own tools like pencils and rulers etc. And in physical education it is the same, each kid brings their own clothes and shoes etc.
But could it be viewed upon as being the same for sloyd? and how about needlework or home economics etc.?

So what do you think, would it be OK to bring your own tools to school, or is it a bad idea?

What is this tool?

ANSWER: A chopper and meat tenderizer.
Thanks to Robin, for providing a link with a picture of the exact same model.
https://www.rubylane.com/item/738907-K230/Vintage-1911-M-H-Tyler-MFG

This is not a quiz - since I don't know the answer.

But does anyone out there have any idea about what this tool is?

Based on the method of hanging the tools, I assume the pictures are from some sort of restaurant, or at least someone who doesn't mind being questioned by Saint Peter on the day of his judgement regarding why he/she thought that it was OK to mount a nice looking socket gouge with a Torx screw through the handle.

I don't know where the pictures were taken, if it is in Denmark or somewhere else. 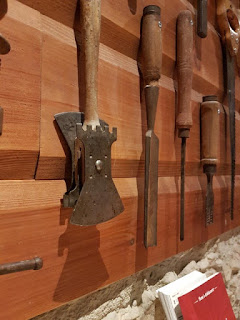 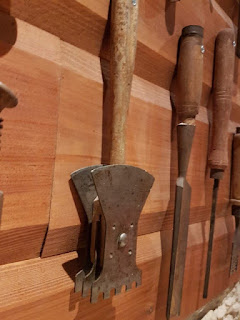 Mystery tool with one blade inverted.

Email ThisBlogThis!Share to TwitterShare to FacebookShare to Pinterest
Labels: Tools

A bit of activity in the workshop in the last period.

This last home period happened to be during Christmas and New Years eve time, so I hadn't planned any major projects in the shop.

I did do a bit though, some leather working with Laura, where we made a couple of belts for some of her friends as Christmas presents, and I started clearing out a bit too, but that is an ongoing project.
During this clearing out, I found the base of a model ship that my dad had found some years ago. I initially wanted to throw it out, but I decided to ask Asger if he would like to make a project out of it.

He wanted to paint it, and then later the plan is to install a mast and a boom and probably make a sail to go with it too.
He settled for some dark blue paint, and due to the low temperatures in the shop, we just gave int one coat and then left it to dry for the rest of the home period.

Suddenly one day, he asked if he was old enough now, to cast tin soldiers on his own?
I said that I thought he was, and helped him to fire up the propane torch (which is technically more butane than propane in Denmark).
I have kept all my molds for making tin soldiers from when I was a child. And we purchased some new molds when the kids were younger. Those new molds were mostly for casting fantasy creatures like orcs, elvers and goblins etc.

Asger cast a bit of everything from cannons to horses and soldiers to some orcs, and he had a great time doing it. There are plenty of ways that you can hurt yourself while doing it, but it is also a way that you can show you child that you really trust him/her, and allow them the thrill of doing something that is exiting for them knowing that it is a bit dangerous.
And it is a thrill to open op a mold and see a perfect figure emerge that has until now only existed as some molten metal in a ladle.
Something that is very important to the children is the fact that the figures they cast look exactly like the ones that I can cast. Despite all my years of skill and knowledge (there isn't much of that btw..)
this is one place where they can make a product just as well as I can. 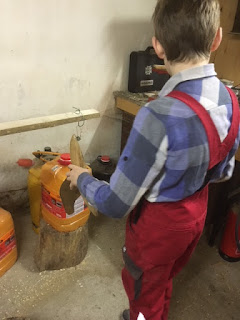 Painting the hull of a model ship. 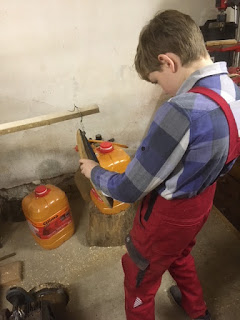 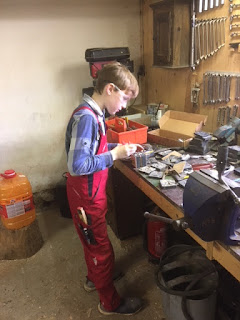 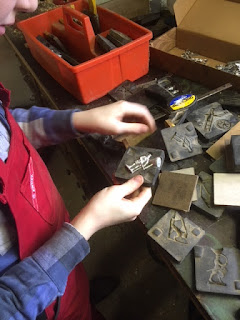 An officer emerges from inside the mold.