At some point I got inspired to build a campaign bed.
I trawled the Net for inspiration, and ended up finding this bed.

The original looks as it is made out of beech, which is a traditional furniture wood over her, but as usual I wanted to make it out of larch. Because it is what I have.

I have never seen one of those beds in real life, but based on that the overall dimensions are 80" x 32" that were described, I thought that I could come up with something that looked similar, and besides the most important thing for me was to test out the frame saw system.

The two main dowels are 1 7/8" thick. I made them by octagonalizing some long pieces and then planed them round. They aren't 100% perfect round, but they are fairly close.

The legs were drilled with a 1 7/8" hole and ripped apart. After that the legs were mounted in the lathe and turned down to give a sleek appearance. Instead of rounding the top, I chose to saw a diamond shape.
Finally I marked out and drilled the stopped holes for the short dowels.

The two short dowels are 5/4" in diameter and I made those on the lathe. I made them overly long, to be able to trim the length afterwards.

I found my old roll of canvas, and borrowed Mettes sewing machine.
It is a regular household sewing machine, so I was a bit curious if it would be able to sew in this thick fabric, but it worked admirably.

Assembling the bed was pretty straight forward, though I had to shorten the two short dowels even more than I anticipated. Right now they could still be shortened with perhaps 1/4", but I choose to wait to see, if perhaps the canvas will stretch a bit over time. They are not perfectly plumb, but splay a bit (I guess 1/2"). But I think it is preferable to the legs pointing inwards.

Thoughts on the build:
Planing a long round dowel takes a bit of practice. I could feel that the second dowel was easier than the first one, but that is hardly a surprise.

My drill press is not very good when it comes to handling large Forstner drills. It lacks power, and it flexes a bit, causing the hole to not be 90 degrees.
It isn't a deal breaker, but I think that I could probably have made a hole just as accurate by hand.

Once assembled, the bed will flex a bit when you sit on it - kind of like a Roorkhee chair.
If the rope is twisted tightly, the bed is surprisingly comfortable. I tested the bed myself, and I it held up just perfectly.

The original bed might have the legs a bit closer to one another, which would stiffen up the whole thing, so I might do that if I make another one at some point.
Mette likes the bed so much that it has been placed in the living room, which is a sure way to determine that the project has been a success. 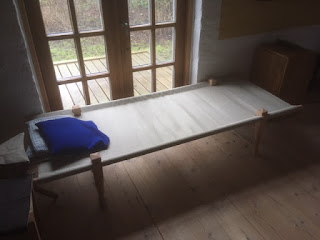 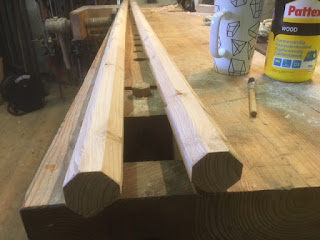 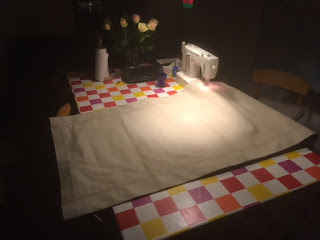 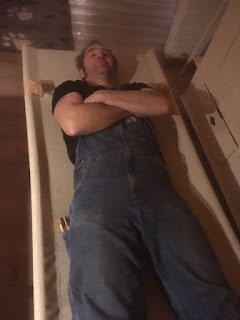 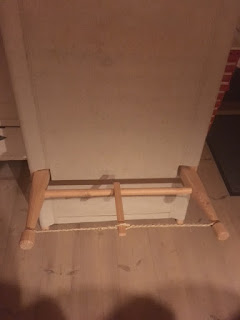 A plane for Asger

I made it home despite a cancelled flight due to snowy conditions in Bergen airport, and Thursday morning I found two packages waiting for me. the one of the I had ordered myself, so that wasn't any surprise. But the other package was a complete mystery, It had clearly originated in USA according to the postal logo on the label.

Curious as to what it could be I opened it and found a letter from Saint Ralph. Ralph explained that he and Ken  had collaborated on sending me a Bailey No 3 hand plane.

The plane was securely wrapped in cardboard and bubble wrap, and was disassembled.

When I started unwrapping the plane my heart sank. Ralph had mentioned in the letter that he had rehabbed the plane, and upon seeing the individual parts I became painfully aware how far from my own pitiful rehabbing efforts the job that Ralph had done was!
Ralph's rehabbing is nothing short of immaculate.

Ken had sharpened the blade, so all I had to do was to assemble the plane, and what a joy it was, to assemble a plane that was already rehabbed.

Right now the kids have a winter vacation, so I plan on giving Asger some instructions in how to adjust the plane, and then I will let him bring the plane with him to school, so he can show his teacher what a sharp plane looks like and feels like.

Thank you very much, Ralph and Ken for this very thoughtful present. It is deeply appreciated, and I am certain that the plane will see a lot of work in the future. 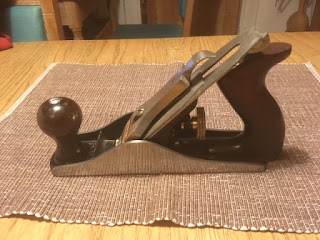 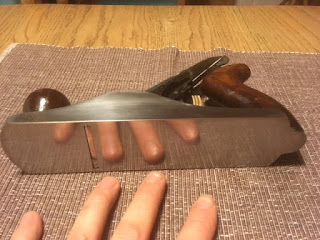 When mirror finish is more than a word! 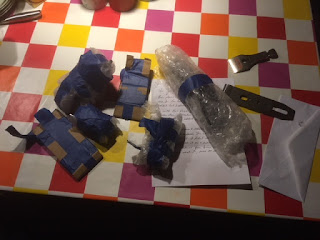 This is how you wrap a plane for shipping.

I got inspired by this post by Bob the Valley woodworker who is organizing his shop.


At a point in my life I would actually feel kind of frustrated after being in the shop, because I felt I didn't get anything done at all.
I would go out there, look a bit around, maybe try to take a couple of stokes with a plane, perhaps move some tools away and try something else etc. But I rarely started a new regular project, and I never completed anything.

After being unproductive in the shop for some time, I would go inside the house disillusioned, and have a cup of tea and feel sorry for myself.

I wasn't getting anywhere at all.

Someplace I then read about another guy who had experienced the same thing, and his mean to  overcome it was that he could only stay in the shop, if he did some actual work or actual cleaning of the place.

I decided to try out that approach. So I put a mental sign up in my head when I entered the shop where it said:
NO LOITERING!

The minute that I started procrastinating or dreaming about future projects or looking at this and that, I had to leave the shop.
It worked great!

Clearing out the shop and organizing all the tools suddenly went really fast, because I would not loaf around - wasting my own time.
When all the tools were in place, I swept the floor and vacuum cleaned the machines. Then stopped for the day, leaving the shop with a feeling of accomplishment instead of frustration.

The next day I opened the door and looked inside. the shop was inviting. But I didn't have any actual plan for what I wanted to do in there, so I remember just looking around and then leaving again.

I can't remember what my first actual project was after my new shop practice, but I remember that it went a lot faster than normally, because I stayed focused all the way.
And due to being focused, I never have the same feeling that I "waste" my time by being in the shop, because I try my best to always be productive out there.

Despite my best efforts, I still experience that horizontal flats will eventually become crowded with stuff, and suddenly there are old pieces of glass in a corner of the shop, scraps on the floor and some surplus wood from the last five or six projects occupying space along one wall. But it doesn't scare me anymore, or get me in a bad mood, because I still keep my imaginary sign hanging in the shop, so as soon as I am out there, I try my best to be efficient, either in building or in cleaning.
Posted by Jonas Jensen at 4:41 PM 14 comments: