I think that this is the longest period without any activities on the blog. But as you probably all know, sometimes there are a lot of other things that needs to be taken care of, and this May had its share for me.

First our daughter had her confirmation at the church, we held the reception at home, so the house and garden needed to be groomed before that. Then I had a lot of work on the riding court and a clogged drain from the yard, so I have seen my part of shoveling for a long time. I did manage to get a bit of woodworking done, but I never found the time to blog about it until now.

I glued up the tabletop for the Barnsley hayrake table. I decided to make glue it all up at once which wasn't a very good idea. The result was more uneven than expected. I tried to flatten it by using a scrub plane, but larch has a tendency to produce some really ugly tear out even if the wood is traversed. Luckily I had started on the bottom of the tabletop, so I could change the strategy for the topside.
My solution was to purchase a belt sander and some grit 40 and 60 belts. That actually worked quite good. It was not as fast as planing, but there was no tear out.
After the belt sander, I used the random orbit sander with some 80 grit sand paper.

Instead of breadboard ends, I added cleats using a sliding dovetail. These were then secured with a single dowel in the center. That way any movement won't upset anything. The cleats were then secured to the top of the legs using some slightly wedge shaped pegs.

I called Charlotte who had asked me to build the table to come over and check the result. luckily she was very pleased with the result, so we helped each other load the table onto the trailer and we drove it to her place.

Charlotte wanted to do her own finishing, so that is why I have not described that part at all. I issued her with a lot of test boards out of larch, so she could test various methods before determining which one she would go for. I still don't know what finish she will chose.

The legs ended up looking a bit bulky and too close to the edges of the table. But that was because the stretcher and the legs were made first, and at that time the requested table size was 48" x 128". But I still think the table looks nice and sturdy even with the smaller top (40" x 98"). 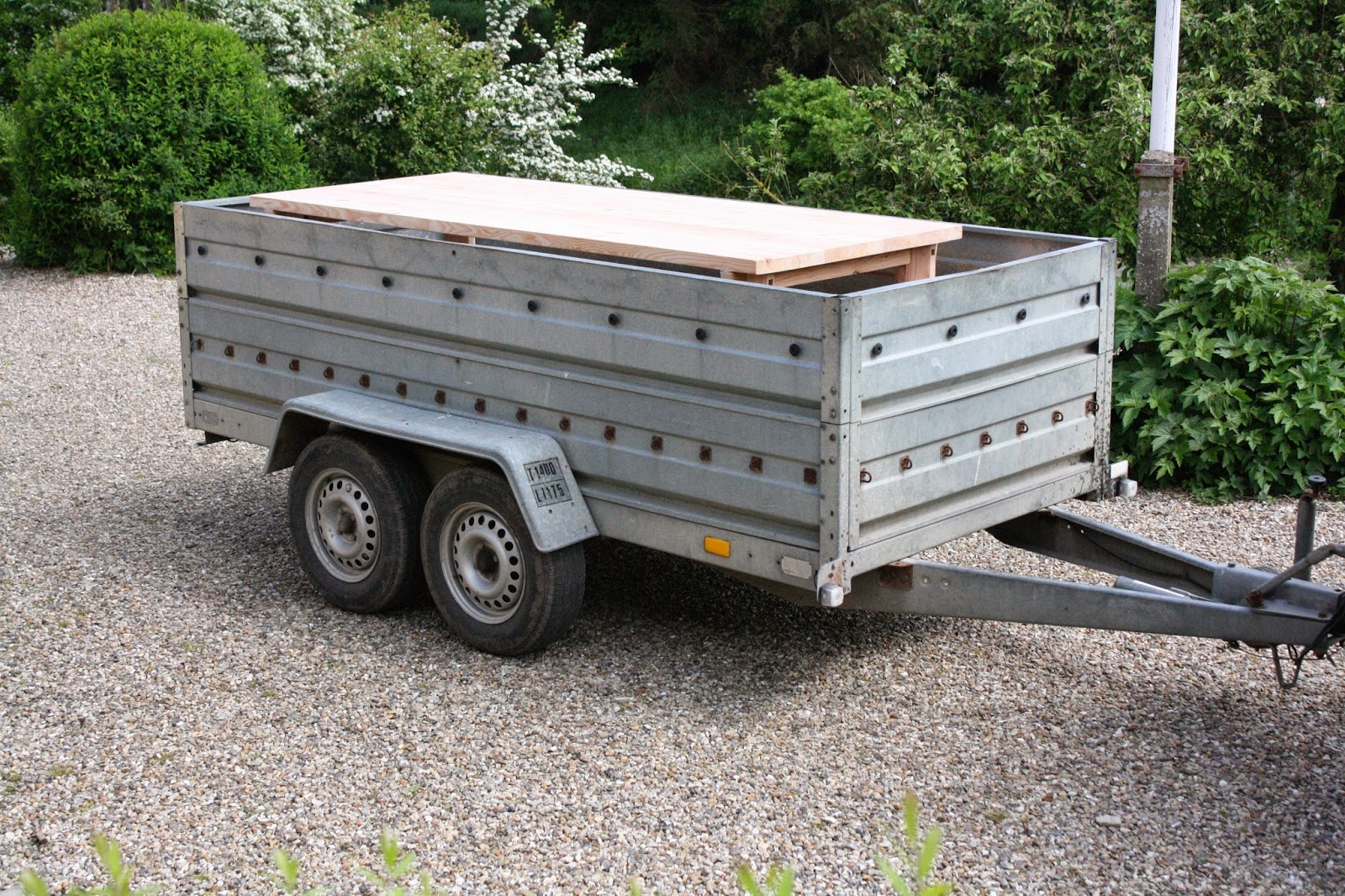 The table in the trailer. 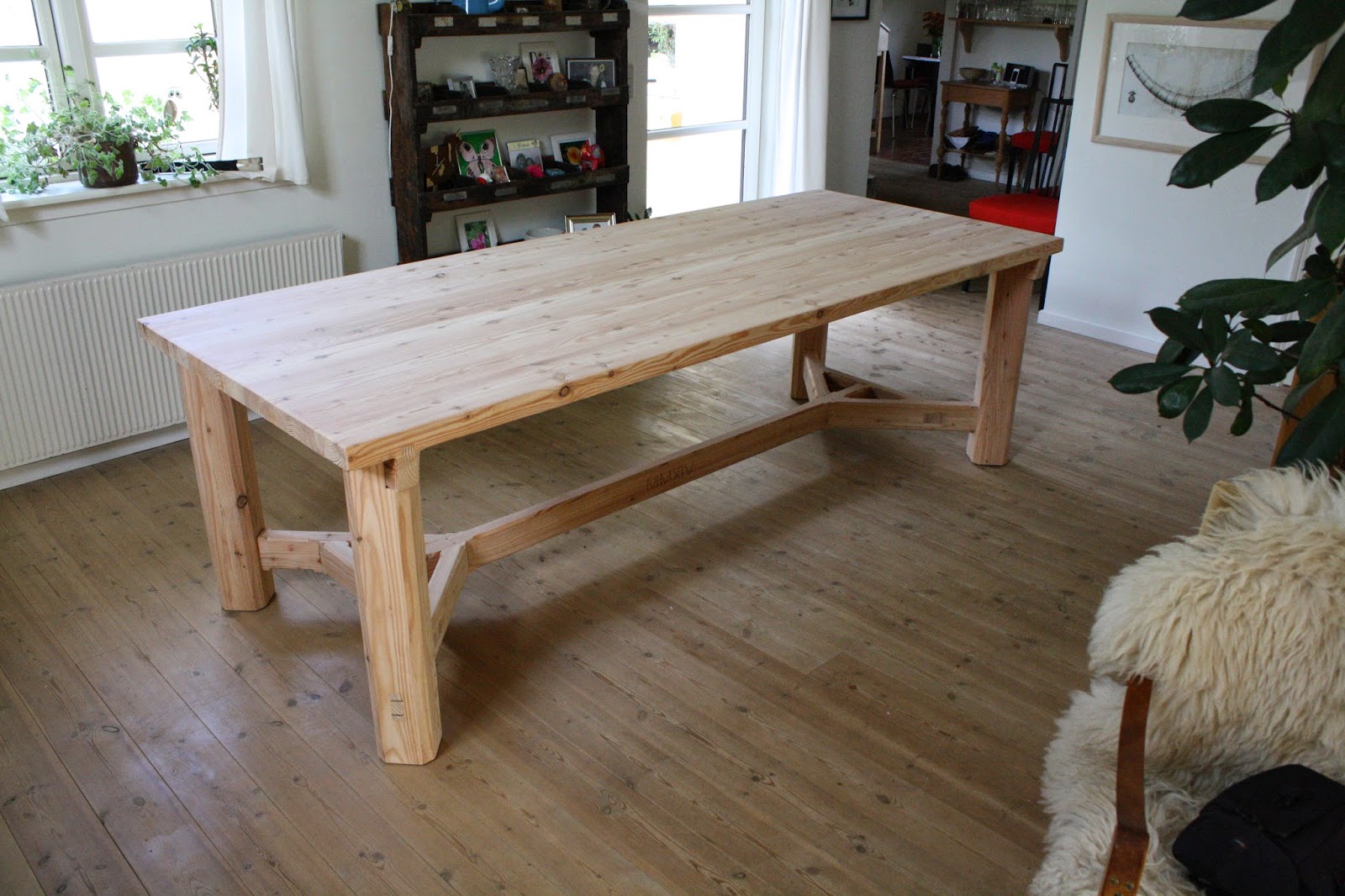 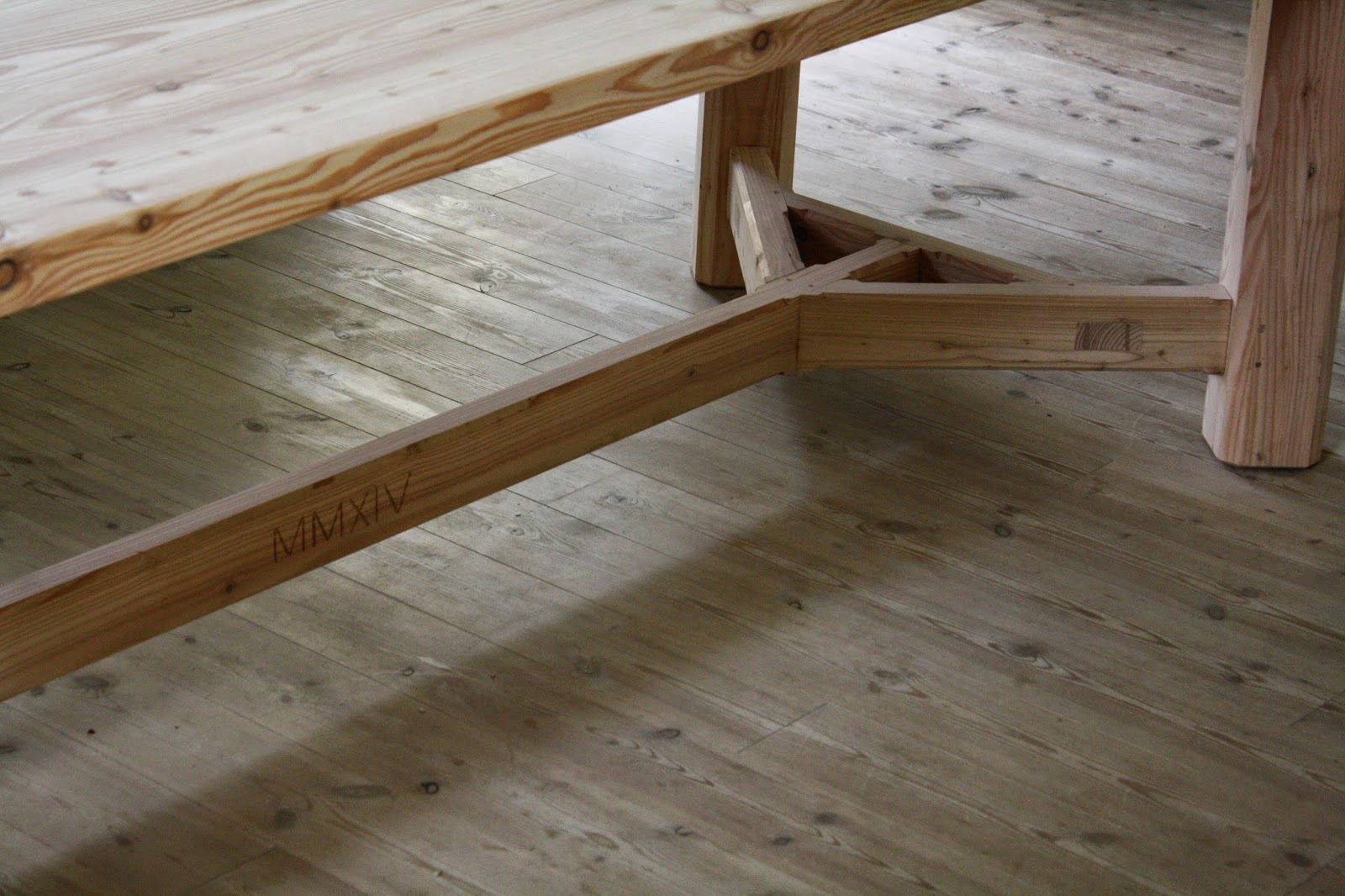 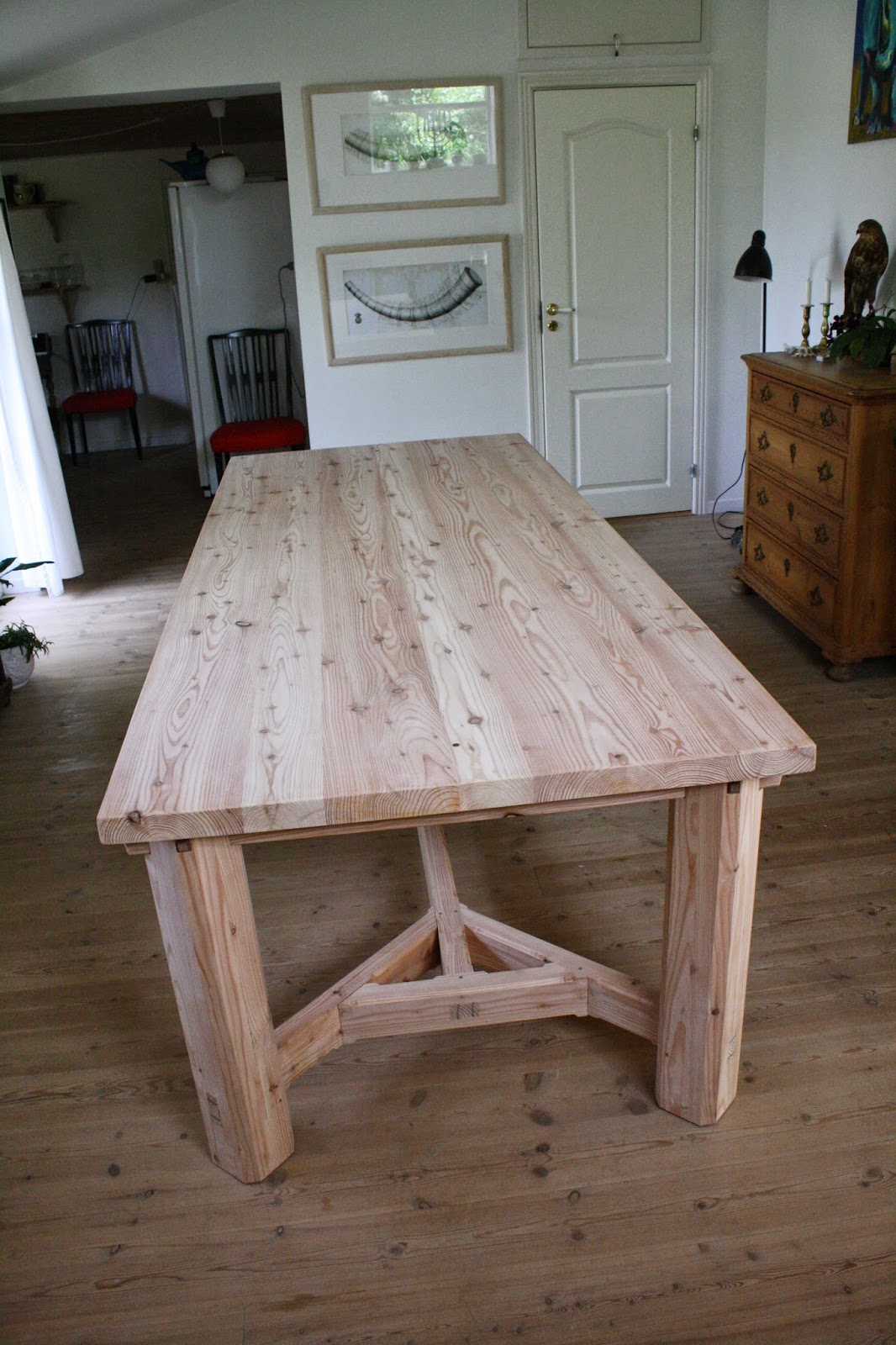 End view of the table. 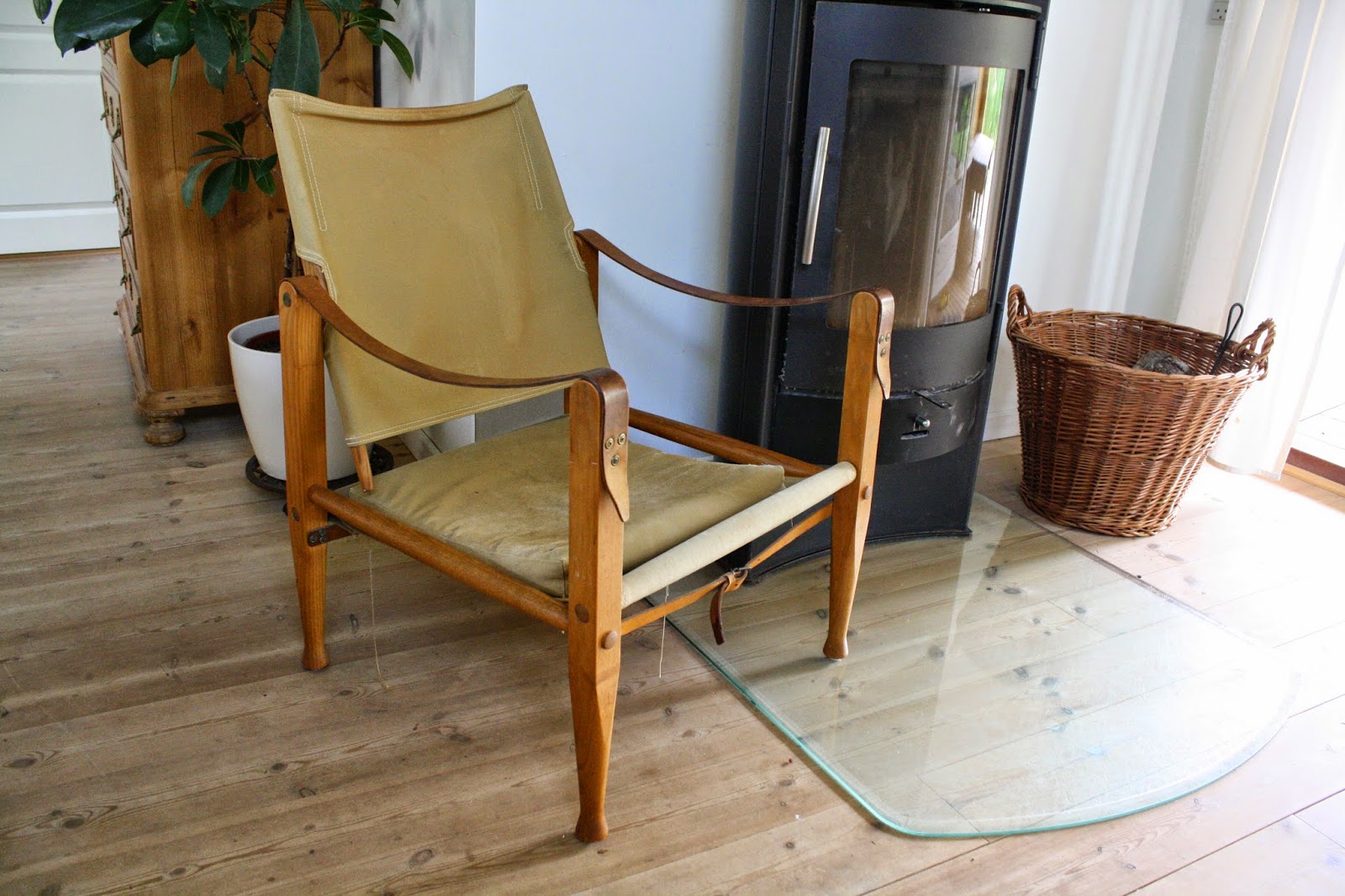