New tool chest for the sea 3, dados, rabbets and dovetails.

After finishing the stock preparation, I decided to try out my moving fillister for making ship lapping on the boards for the bottom of the chest. It went so well that I forgot to leave two end pieces with only a rabbet on one side. I still have a stretch that is wide enough, so it shouldn't be a problem.

Next I sawed the pieces for the case to their finished lengths + a small bit for squaring up on the shooting board.
The shooting board was out of square. I knew it was last time I used it, but I never did anything about it. But this time I had the fillister that could work as a rabbet plane. So I dismounted the fence and the rod and used it it adjust the shooting board with.
After that the ends were squared up.

I remounted the fence on the moving fillister and planed the rabbets for containing the bottom of the chest. This went surprisingly smooth.
Next I engaged the nicker iron of the moving fillister, and made a rabbet on each end of the tail boards. I discovered that I had a tendency to tilt the plane a bit, so the rabbet isn't completely level. It is a bit deeper on the outside which could result in visible gap once I assemble the case, but time will tell.

To try something new out here, I decided to go the "tails first" route. It is what I prefer to do while at home, but with my new rabbet making possibilities I figured that I would give it a go out here as well.

The tails were laid out using a divider. Given that this is supposed to be a tool chest I made them a bit sturdy. I used my old cardboard dovetail marker for laying out the angles, I think the slope is 1:6, but I can't really remember. Anyway that used to be the traditional slope in Denmark for soft wood, so it should be OK.

Instead of using a hack saw for sawing out the tails I tried using my dozuki saw. It is not the best saw for the job, possibly because it is filed for cross cutting. But nevertheless it got the job done. An advantage of using such a narrow blade for the tails is that the corners become more crisp compared to when I use a hack saw.
For the tails I think I'll go back to the hack saw, as it is easier to control, and the corners at the bottom of the pins will be square to the ends of the boards so a fat kerf doesn't matter here.

The waste between the tails were chopped out with a chisel.
I almost feel sorry for mentioning this again, but the Crown chisels I have in this set have steel that is as soft as tin foil. They are easy to sharp, but they very quickly get a damaged edge which would be understandable if it was iron wood, elm, superdry pitch pine or something along those lines. But this is soft spruce, so the edge ought to hold for more than 3 tails.
I think that I'll might find a 1/2" and a 1" E.A. Berg chisel at home and substitute the two Crown chisels with those. Thaw way I won't have to become irritated every time I need to chisel across the grain.

At the next opportunity I'll work on the pins and hopefully be able to glue the case together. 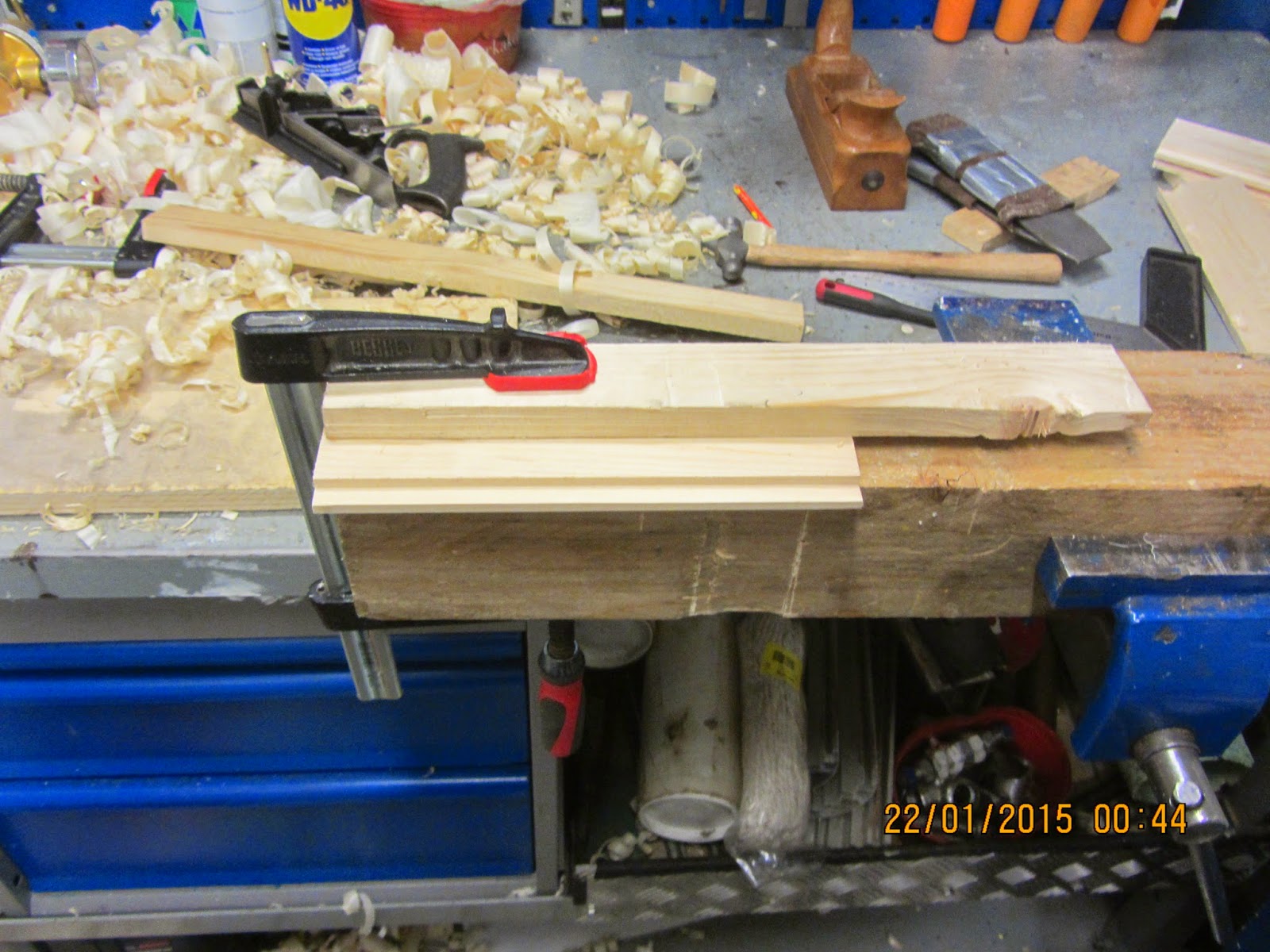 Set up for making dados. 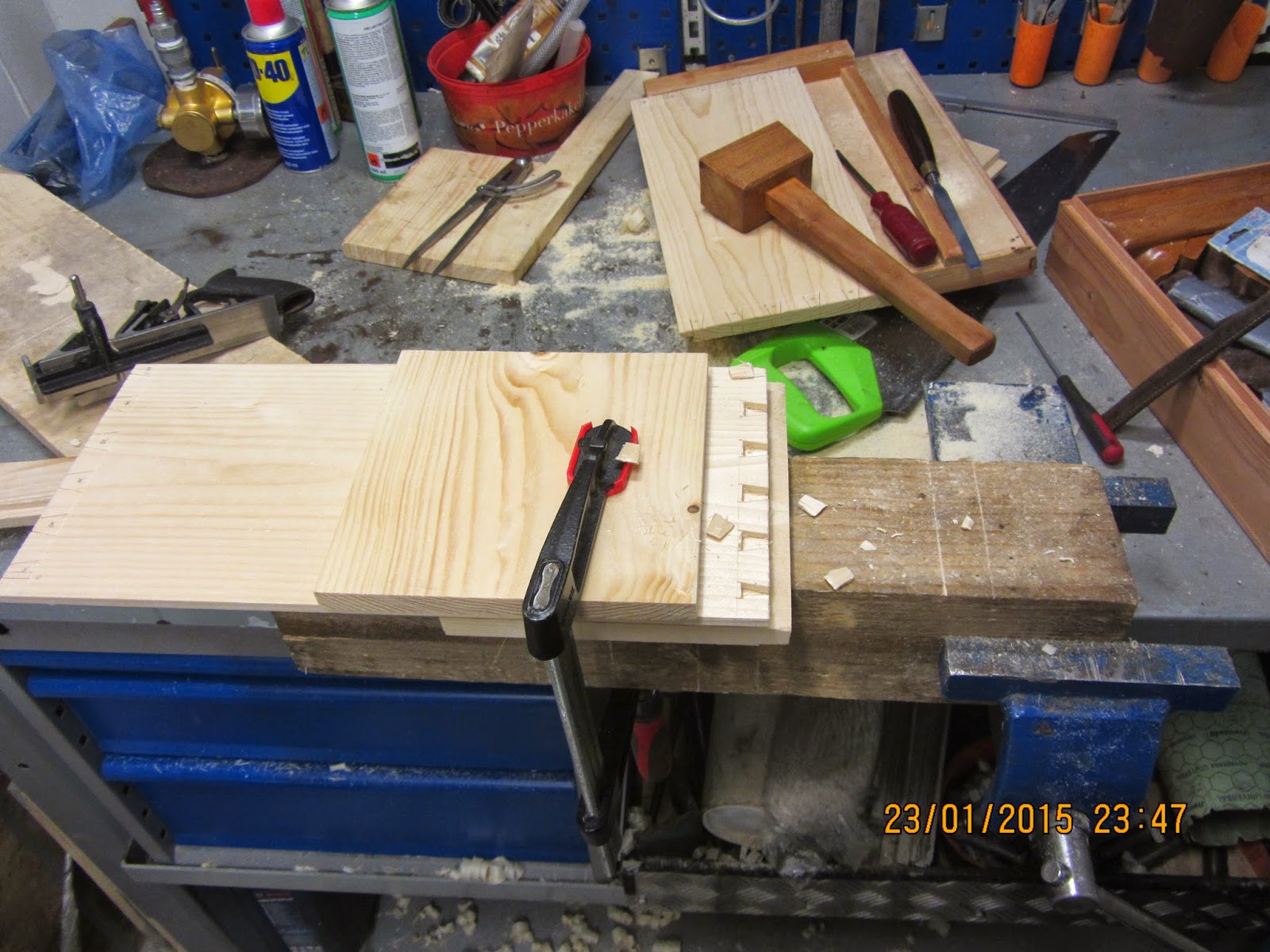 Chopping out the waste between the tails.