I signed on the ship yesterday, and as usual I brought my homemade green tool chest with me.

Since I have traveled with the chest for a bit more than a year now, I had intended writing a kind of review based on my experiences with the chest.

But thanks to SAS (Scandinavian Airlines System), the review is a bit different than what I had intended.

Upon arriving in Bergen I discovered that I was unable to pull out the handle for using the wheels on my bag. That made my alarm bells start ringing.

Today I tried to grab a clean T-shirt from my bag, and it was stuck to the tool chest. At first I thought that it had just caught on one of the corner guards. But when I looked  closer it was also stuck to another T-shirt. I examined the corner thoroughly and it dawned upon me that they were not simply attached to the chest - they were glued to it!

I unlocked the chest and tried to raise the lid - impossible.
So the sad fact is that the bagage handlers of the SAS have mistreated the bag in such a way that the small glass of white glue I had inside have been broken, and due to the bag being thrown around, the glued hadn't just stayed at the bottom of the chest, but had managed to seep along the side to the top, gluing everything on its way.

I brought the chest to the engine control room, and I have succeeded in opening the lid and removing the large till. But the rest is still stuck.

I have filed a report to the SAS, but I doubt that I will get anything out of that. So I will try to see if I can pry the parts from each other. 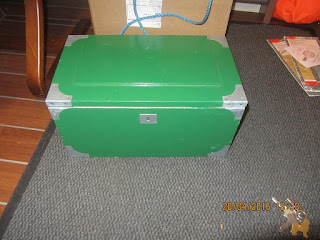 The chest now with the lid able to open. 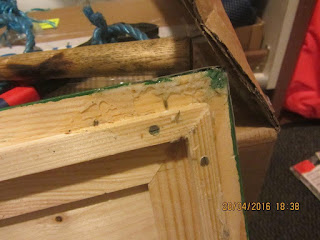 The glued up corner of the chest. 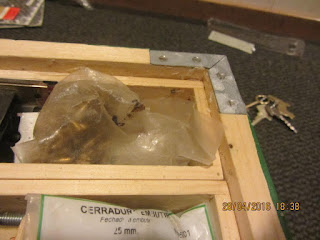 This is the corner where the glue has seeped out.