Before making the dados I decided to plow a groove for the back of the spice chest. I have placed the groove so it won't be visible from the outside of the chest.
Since my blade is kind of narrow, I plowed two grooves next to each other to get a width around 3/16".
With the grooves out of the way I turned my attention to the dados.

Having already marked up where the dividers should go, it was a matter of pulling myself together and start making them.

The best way I know of using only hand tools provided you haven't got a real dado plane is to place a straight batten next to your line and let that guide your saw to make a straight cut.

Once the saw cut is at the desired depth, you can remove the bulk of the waste with a chisel. Finally you can clean up the bottom of the dado with a router plane.

There isn't a whole lot more to say about making the dados, except that it all went pretty much like planned.

Back when I made the "cabinet with many drawers" I didn't know that it was a good idea to set the door in a rabbet to make a bit of a clearance to help sliding the drawers out.
But being almost two years wiser, I figured that this would be a fine project to test out that theory.  So I found my moving filister and set to work.
I had to stop the rabbet at the top of the panels, so I even had a chance to try it out with the blade mounted in the forward position. It worked pretty well on one of the sides, and not quite so well on the other , But that was due to the grain orientation. A bit of sanding helped on the surface, so I consider it a success. 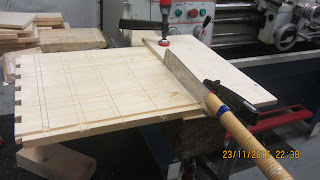 Set up for handmade dados.