Yesterday I spent a couple of hours just filing the front of the mouth so that it would allow the blade to protrude. I also started chamfering all the edges of the sides. These seemingly small tasks actually take quite a long time.

Today I decided to start on the lever cap.
I have had an eye on an old butterfly valve for some time now, because it would give some great material for this part of the project.
The valve is a 12" valve that used to be mounted on the ballast system of the ship. It was replaced during the dry docking, because the rubber seating had developed a crack that caused the valve to no longer hold tight.
Not so many years ago it was custom to change the rubber insert in those valves, and it can still be done on some types yet. But this valve is of a type where the rubber is glued to the body, so it can't be repaired. It can however be used for a custom lever cap.

The disc is made out of aluminium bronze, which is sea water resistant. It is also a different colour than the steel that I have used in the build, so it should give a bit of visual interest once it is complete.

I used an angle grinder to cut out a piece I deemed suitable. I deliberately included a cast stamp saying C954. I have no idea what it means, but I thought it looked good.
After getting the piece free from the valve disc, it was again back to a lot of filing.
I have managed to position the holes for the cap iron in a way that it would look bad if it was mounted with screws in the side. So instead I am going to install a rod in those holes, and slide the lever cap below this rod, and capture it in a semicircular depression.

After drilling a hole for the cap screw and making a thread in the hole, I again used the angle grinder to remove some more material. I did this after the drilling and tapping, because it is so much easier to clamp a squarish piece in the vice compared to an odd shape.

In the beginning I considered leaving the entire surface as it came from the valve i.e. as a coarse casting, but in the end I decided that it would look like I had skipped a step or two, and I started filing the surface to get it nice and smooth. 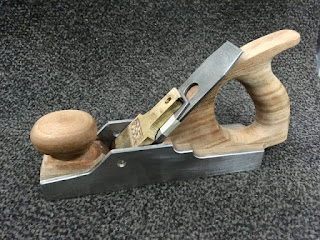 The current state of the project, still some way to go. 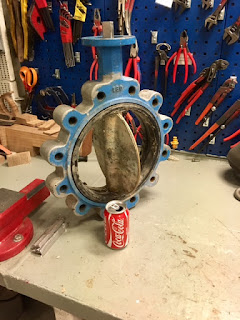 Butterfly valve, empty can is for giving an idea of the size. 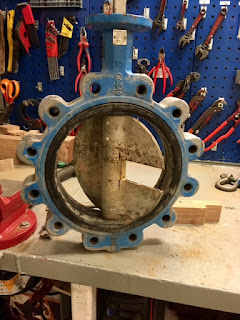 No one will notice that there's a piece missing. 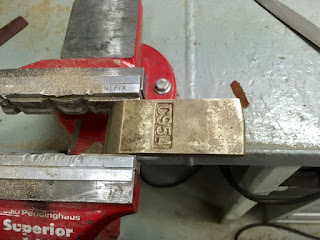 Started to file the surface. 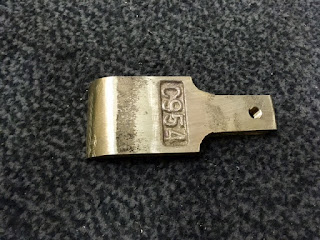 Drilled and tapped, but not finished yet.