A small barn for the summer house 16, staircase installed.

After preparing all the individual steps of the staircase, I hand planed them front and back plus the upside before mounting them in the stringers.
I had to keep reminding myself that it is for a barn, so I shouldn't go all wild in trying to achieve some show surface on the underside.
Mounting the steps was straight forward. But as I discovered, doing this on top of the workbench wasn't a smart idea.
I had to apply a couple of clamps to keep everything together so I could lift it down to the ground where I would be able to hammer in some nails.
A little bit of forward thinking would have been nice here.. (but that is not my strongest card).

I hammered in one nail per step, and then turned the assembly over so I could square it up before pounding in the nails from the other side.
When I had bashed in all the nails on that side I again flipped it over and hammered in the last set of nails on the first side. My idea was that if I had put in both nails in the first side straight away, it might have been more difficult to square it up.

The individual steps were sawed flush to the side that will be facing the wall, and sawed at an angle to the side facing the room. This is something I have seen on most old stairs, and I like the subtle elegance of this ornamentation.

The completed staircase was loaded into my trailer and I drove it to the summerhouse.
While maneuvering the assembly out of the shop I became aware that it wasn't very easy to move around single handed. But I managed in the end.

At the small barn, I mounted the assembly by means of a bit of ingenuity, a cargo securing strap and a couple of clamps.

As per Mettes suggestion, I have wrapped up the barn project for this time, since I'll be heading back to work in a weeks time. 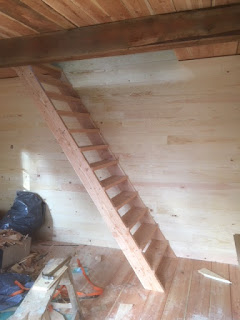 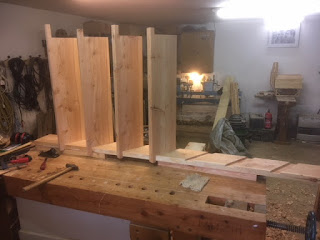 Mounting the steps in a stringer. 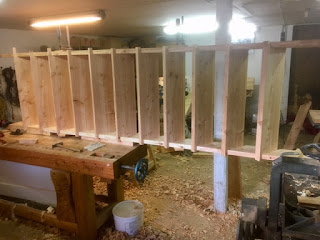 This would have been smarter to do at the floor. 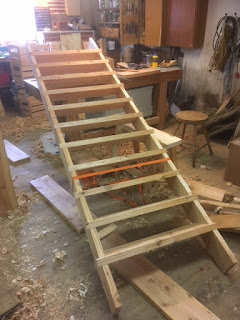 Flipping over the assembly. 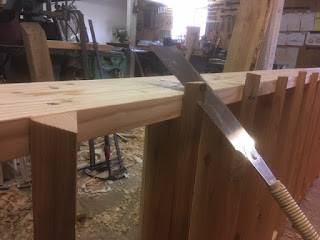 The only decorative elements of the staircase. 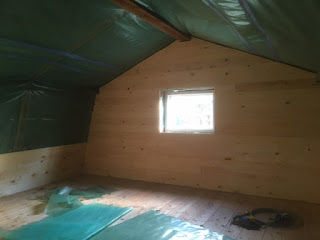 Progress on the attic.