After blogging about the too large back panel, I decided to follow the advice of Brian Eve, namely to cut the thing apart and pretend that it had been an exercise in making bridle joints.
I really don't like to do something like that over, but I think that it really was the best solution. That way I won't be pushing more problems ahead of me for the rest of the build.

The stock for the carcase ended up being closer to 1/2" instead of the 5/8" that I had hoped for, so instead of a groove for the back panel , I decided to make a shallow rabbet.
I used my Record No 50 combination plane for that task, and I have to say that a dedicated rabbet plane does a better job in my opinion. I will admit that having some stock that is far from straight grained didn't help either.
Eventually the four rabbets were acceptable, and as they will all be hidden under the frame of the back panel, the look of the surface doesn't really matter that much after all.

I sawed the pieces to the correct length, and marked out for some dovetails.
The wood is considerably harder than the pine or spruce I usually work with on board, so I had to trim the dovetails a bit to make them able to go together without splitting the boards.  One of the corners was a bit loose, but the remaining three were nice and tight.
The sides of the carcase were pretty flat. The top and bottom were quite a bit more warped and cupped.

Finally I glued it all up and made sure that it was square.

The next task will be to make some dadoes for the shelf and the divider between the cabinet part and the drawer part. 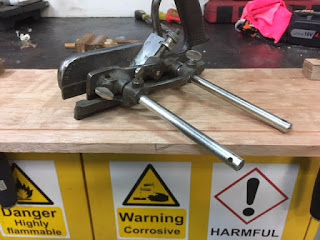 Record No 50 set up as a rabbet plane. 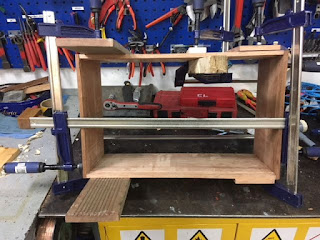