It is nice to find out that someone apparently have noticed that I have started to blog again, though I much prefer regular readers and comments from those instead of all those fake comments that once in a while seem to flood in.

Today I had 37 comments, all pretty much using the same words, and all completely irrelevant to the blog post where the comment was posted.

It seems that Ted McGraths 16000 woodworking plans have changed its name to woodbex. I guess it is the same scam, and I sincerely doubt that all the plans are some that he made himself.

Here's an earlier warning about the site from woodworkweb.

I guess I'm not alone in once in a while seeing something nice and wondering, wow, I'd like to know if there is a plan available for that.  But I think there's a much better chance of finding that out if people ask in the comments field about it - rather than forking out 67 $ to a scammer and risk that maybe that plan isn't part of the 16000.

If you want to make chairs there are several well respected chairmakers out there who has got plans for sale, heck I think some of them even wrote a book about making chairs. Get those plan in a legal way instead of being part of a scam.

The same goes with a bunch of other stuff. Popular Woodworking and Fine Woodworking all have made great plans, if you haven't got the issue and can't borrow it at the library, well, then pay the amount of money the publisher would like for a back issue, and then go on and build a set of barristers bookcases with a good conscience.

Truth be told, I didn't read all those 37 comments today, I kind of stopped after reading the comment that was posted on my post about building a coffin for my dad.

That comment read something like: I built something similar with help from ...
Hmmm, I bet you did! 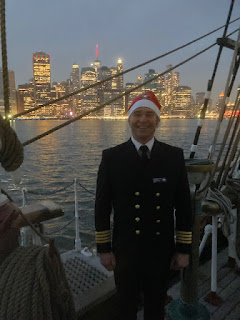 All ready for Christmas Eve in Brooklyn
(Would you buy a used woodworking plan from this person??)