Large knobs made on the lathe

After installing the oversized peg board, and moving the stable sheets (rugs), I installed an old shelf in the saddle room. This helped organize all the odds and ends that always seem to acumulate in a short time. SWMBO asked if I could make something that would hold the riding helmets, thus freeing space that could be used for the bridles instead.

I quickly acccepted and this morning I turned some nice pegs. They look like mushrooms on steroids.
The turning was made with two mushrooms made out of 1 blank. They were then separated using a saw and then ends trimmed using a chisel.
The mounting was done by boring a pilot hole in the base of the mushroom and then screwing from the back of the panel where they were fitted.

Those were then installed on the side of the shelf, and then entire project took about 2 hours including turning and mounting. This is way faster than my ususal projects, but then again it wasn't complicated in any way.

I was able to fit 4 "mushrooms" for helmets, and the remaining 4 were installed near the box of each horse for holding the halters. 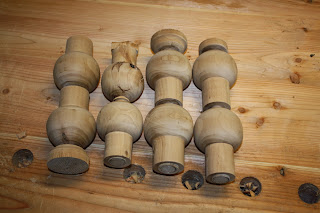 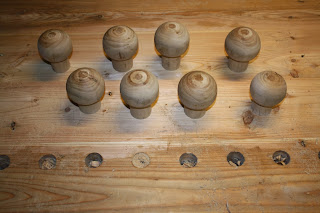 8 mushrooms ready for being mounted 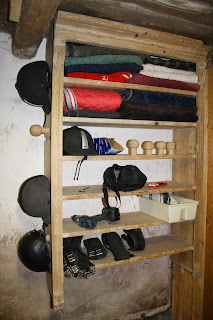 The mushrooms mounted on the side of the shelf.
1 helmet removed for explanation purposes.