Before going back to sea, I had given some thoughts as to what I would like to try to build this time. I decided that I have made enough chests for a while. On the other hand, it has been a while since I made a cabinet with a lot of small drawers.

I bought some more small brass hinges to bring with me, and I even decided to bring a lock. I purchased that one years ago without no definite goal, simply because it was on sale.

The sea chest builds were both made without any drawings or sketches. But I figured that it wouldn't hurt to have a rough idea of the problems I might encounter during this build so I made a small sketch.

The principal dimensions are 30 x 40 x 14 cm (12" x 16" x 5.5"). This should give a nice small cabinet that can be transported home as luggage without any problems. With a depth of only 14 cm I won't have to glue up any side panels, but I can get them out of the lumber that I have on hand.
This time we are even so lucky as to have some old single use pallets lying about, so maybe I won't have to rip as much as I did when I made the seaborne chest.

The door is what is troubling me the most.
If I make a planted door, I can gain access to the drawers that are in the hinge side of the cabinet. But then I can't make the lock work, because it needs to enter a mortise. This could be overcome by adding a small portion on the inside of the door, so the lock would be further in than the actual door. But that would mean that I would have to make some of the drawers shorter than the rest, and I am afraid that it would look strange.

If I make an inset door, with then hinges set into the door, the left side drawers can't come out. That could be overcome by adding a small board inside, thus starting the drawers about 1/2" from the actual side of the carcase. I think this will look the best.
It is also possible to make an inset door with the hinges set into the frame. That way I won't have to add any boards to the inside of the carcase, but the look will be slightly different.
An inset door will allow the lock to be fitted as it should.

Then there are the various design possibilities of the door itself:
It could be made with mitred bridle joints at the corners, I think that would look good if I made mitred dovetails at the front corners as well.

On the other hand,  it could be made with regular mortises and tenons giving rails and stiles at right angles to each other. That would probably look best together with a normal dovetailed corner.

The idea is that the cabinet should be able to be mounted on a wall, so I plan on making the pins on the top and bottom of the carcase. I'll just go for regular through dovetails for the carcase.
There will be plenty of half blind dovetails at the drawer fronts.

The calculations on the sketch is for the height of the graduated drawers. 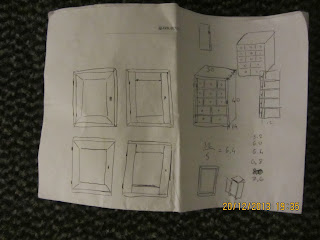 My building sketch with design possibilities