A regular way to put a back on a small cabinet is to make a rabbet along the inside of the carcase, and then nail some boards on. these could be shiplapped or tongue & groove, or with a loose spline etc.
Another approach is to make a large floating panel that sits in a groove or use plywood.

All of the above mentioned solutions will sort of require that you have sufficient stock of an appropriate length - which should be equal to or longer than the height of the finished back.
In theory it is possible to put the boards on horizontally, but I have never seen it done, and It is really not a classic way to do it.

I only had two long pieces of steps, and after gluing up panels for the sides, there was not much left. I still need to use a bit for the front frame, but there was just enough for a frame on the back too.

The individual sticks were planed to a somewhat uniform thickness, and then I tried to lay out where the grooves for the small floating panels should be. I used my combination plane to make some grooves, and it ended up looking like shit. Some earlier owner had rounded the end of the blade that I used, and also softened one of the cutting edges. I hadn't noticed it, but it cause the blade to wander and the grooves were not very consistent. In addition the grain orientation helped to ensure that at least one of the sides had a hefty amount of tear out, so I wasn't too happy with the results.
I try to remind myself that very few people judge the quality of a completed cabinet on the appearance of the grooves hidden by the floating panels - and that actually made the thing a bit easier to live with.

In order to not complicate things further, I decided to assemble it by making bridle joints. The plan is to glue the entire panel assembly inside the carcase once it is complete, so it won't have to hold up to that much abuse - and it is technically also just a small cabinet.

I can feel that I am a bit out of training when it comes to something like this, because I managed to disregard the marriage marks on the stiles and also to make a few extra saw cuts in what was to become the lower rail.
It might have paid of handsomely too, if I had made sure that the sticks were of the same thickness before starting joining it all together.
I still feel fairly confident that I can fix the small errors with a sharp plane and a few swipes, so that the frame and panels will end up looking OK.

The next task will be to plane down the sides of the two larger panels, so they can me mounted in the frame and the assembly can be glued up. 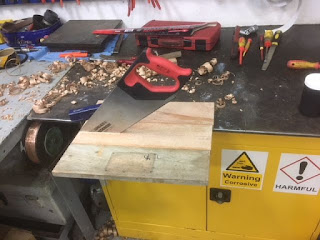 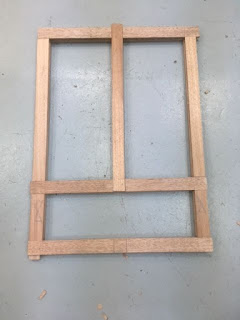