A halter for Mette's horse

Last time I was out here, I ordered a reprint of an old German book on leatherwork. It is written in 1908 by a master saddler and covers everything you could wish to know about leatherwork including how to set up your own business with suggestions for various types of letters that you could be interested in sending out to e.g. customers, people who owe you money, newspapers etc.

In that book there are some suggestions on how to make halters. And I thought that t would be interesting to make something from a set of plans instead of just copying one of the old halters like I have done previously.

The measurements are pretty close to what I have made before (I guess the size of a horse's head hasn't changed much) but these plans also suggest that you make a head band. And that is new to me. I have only seen that on regular bridles. So before leaving for sea, I cut some leather straps and loaded my small box of leatherworking tools with me determined to try to make such a halter. I also ordered some hardware so I could make something that looked nice, instead of simply cannibalizing an old halter for cheap steel parts. So this time it is new cast brass parts.

It is funny that I can easily feel that I am not that accustomed to working in leather compared to working in wood. So my initial rough calculations on how much leather I would need is off. I had brought enough leather with me to be able to make two halters (I thought), but I only have material for one and a half.
Also despite trying to think ahead, I make small mistakes. It is not that these are deal breakers, but I am pretty sure that they are avoidable if I had more experience. The good thing is that I am able to recognize some of them, and I have corrected a few along the way, so I still try to only make the same mistake once or twice.

At the moment we are sailing across the Atlantic, following the north east trade winds (Passat). We passed Cap Verde the other day, and the temperature of the sea water is 28 dgC, and the air temperature is the same during the night, but a lot higher during the day due to the sun. So it is nice to have a project that I can do outside instead of having to work in a super hot shop. At the moment I am working on the headband itself, so that is not yet in the pictures. 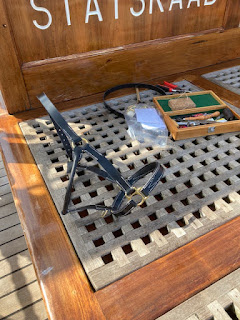 My work station on the poop deck. 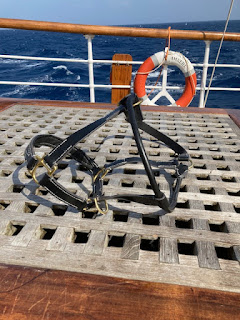 The view is quite nice. 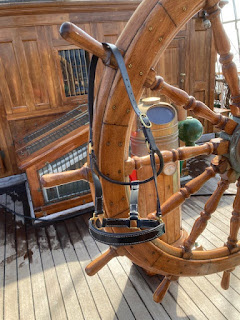 Halter hanging on the emergency steering wheel. (also on the poop deck)