A new door for the quick closing valves cabinet 1, hinges and face frame.

Fire protection has generally always been a big issue on board ships. There are various systems in place for keeping the ship and crew safe. Among those systems are fixed fire fighting installations such as either Carbon Dioxide total flooding plants, Flexi fog water mist extinguishing systems, regular sprinkling systems etc.
A system which is not in use int he merchant marine anymore is the use of halon. It was a fine system, but it was ruled out a couple of years ago due to the fact that halon gasses were very effective in depleting the ozone layer.

Other types of protection might not be so obvious, but one of those is something called quick closing valves.
These are spring loaded valves that are fitted to oil tanks (fuel and lubricants), and in regular service they are kept open. In the case of a fire in that area of the ship, or on that particular system, a cabinet for activating those valves are positioned outside the accommodation. That way you can stop the flow of oil in case of a fire and do it from a safe distance.

For some strange reason, many of these cabinets rust like crazy. It is probably because the cabinet itself was never really intended to be mounted outside on a ship, and a stainless steel cabinet is more expensive than a cheap non stainless cabinet is.
Even a coat of paint is normally not enough to keep them good looking.
Fitting a new cabinet instead of the old is a huge and complicated task, mainly due to the fact that you would have to disassemble the actual system in order to move it into a new cabinet, and by doing this you are deactivating a safety system, which is not something that is taken lightly.

On our cabinet, the cabinet itself is in decent condition, but the door has rusted through, and it looks bad.

We discussed the possibility of making a new door out of wood, and mounting that on the cabinet, so it would look a bit better. And I was happy to give it a try. The actual function of the cabinet won't be changed.

The first task was to find a set of hinges. The original hinges on the cabinet are some that are an integral part of the rusted door, so I couldn't really use those. On at least two of my former ships, I knew exactly where there were some spare hinges,but that really doesn't help me on this ship. Out here we haven't got any. So I tried searching the vessel to see if I could come up with something. One of the deckhands told me that he had seen part of an old metal box that had been scrapped lying in the garbage collecting room. I had a look and fortunately it was the top side of the box, complete with a set of hinges that had been welded on during construction of the box.
I brought the parts with me to the workshop and removed the hinges using an angle grinder.

The wood was less of a problem. We have a decent stash of wood on board, including some 2x4 exotic looking reddish wood. (I have no clue what it is, but it seems hard and durable).
I had a bit of help digging the plank out from underneath a bunch of other planks, and cut two pieces of to use for the door.

We happen to have a nice Festool circular saw on board, so I decided to use that one for resawing and ripping instead of doing it by hand. It was a lot faster, but the results were not nearly as accurate. Part of that problem is probably that someone has thrown away the fence for the saw. I have no idea why anyone would do that, the saw itself comes in one of those large plastic boxes (Systainer I think) so there was plenty of room for a fence in there.
So I had to do my sawing freehand following a line.
I did it on the open deck do avoid getting dust all over the shop.

At first I made a face frame. This will be screwed to the front of the cabinet, and then the door will be mounted on it once I get that far in the project. 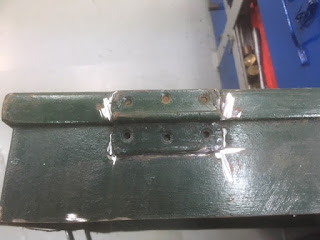 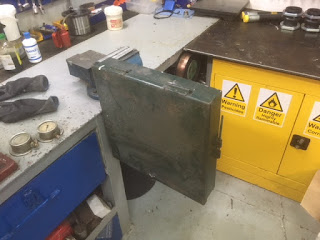 The top part of an old metal box. 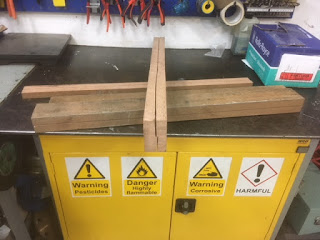 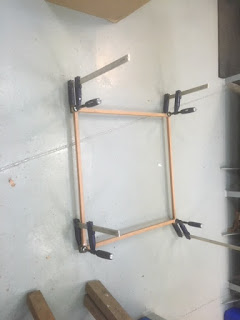 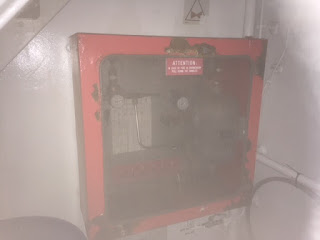 Rusted door of quick closing valves cabinet.
(I had to use flash, hence the worse than normal quality)