One of my colleagues has got a S&W 629. He is Norwegian, and apparently it is a bit easier to be a gun collector and user in Norway compared to Denmark.

When I built the pilot ladder cabinet, it once again stuck me that I like building boxes of different types, so I had decided that this time the project had to be a box of some sort.

Most of the time out here I just build something and never really bother about if it is needed or wanted by anybody, but I eyed an opportunity, to make something that would fill a need and be appreciated at the same time, so I asked if he would be interested in me making a presentation case for his revolver.

He was thrilled that I would do that, and I was equally thrilled to have a goal to work towards.

He told me a bit about the gun and had some of his acquaintances take some pictures of a similar model, so I could get a couple of overall measurements.
He would like if possible, that there was room for some ammunition in the box as well, so I have tried to plan ahead for that as well.

He has been on this particular ship for a long period, so he has a special relationship to it. I decided that to honor that, I would use the remaining parts of the pilot ladder as material.

The overall dimensions of the presentation case will be approximately  16" x 8" and 3" tall.
That should give the interior space that I am looking for.

I plan to dovetail the box together, and install floating panels as top and bottom at the same time. Then after the glue has dried I am going to saw the box apart to form the lid and the base. That way I should be fairly sure that the parts will fit together, and the grain will be matching.

The inside will have some sort of partition to define where the revolver will be placed, and it will be lined with felt to make it look nice.

Stock preparation is (as usual out here) a matter of re sawing some old pilot ladder steps, gluing up a couple of panels and planing the boards and panels. 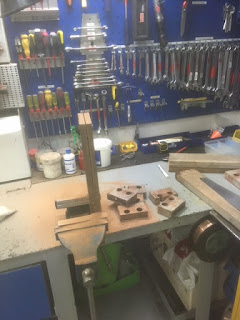 Re sawing a step from the old pilot ladder. 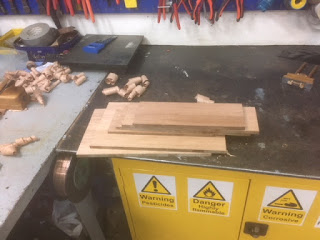