The painted door in the stable.

Today it wasn't raining, so I decided to move swiftly and paint the door.

I normally like to use oil base paint, since I haven't got much faith in latex /acrylic paints.
The colour is called Swedish red. It is a Danish produced paint from Esbjerg Paints. The label of this paint is called Arsinol, it is intended for outdoor use.

The paint has got some added thickener (I think it is called thixotropic), so it doesn't drip very much. It covers really well, so all in all I find it an OK paint.

The handle is placed high up on the door, but since the holding arrangement for the latch is also embedded in the brick work, I had to stay with that position. 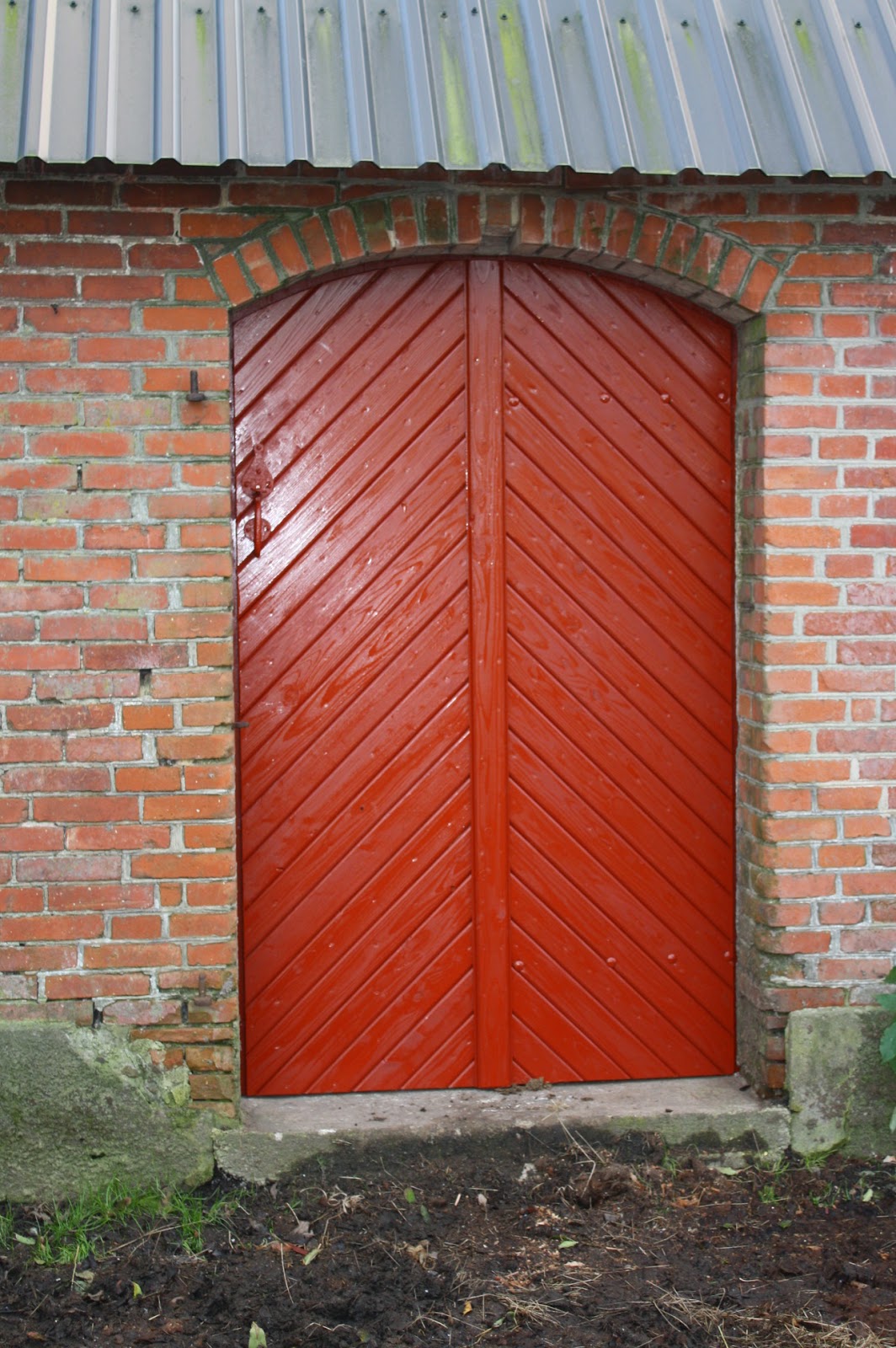 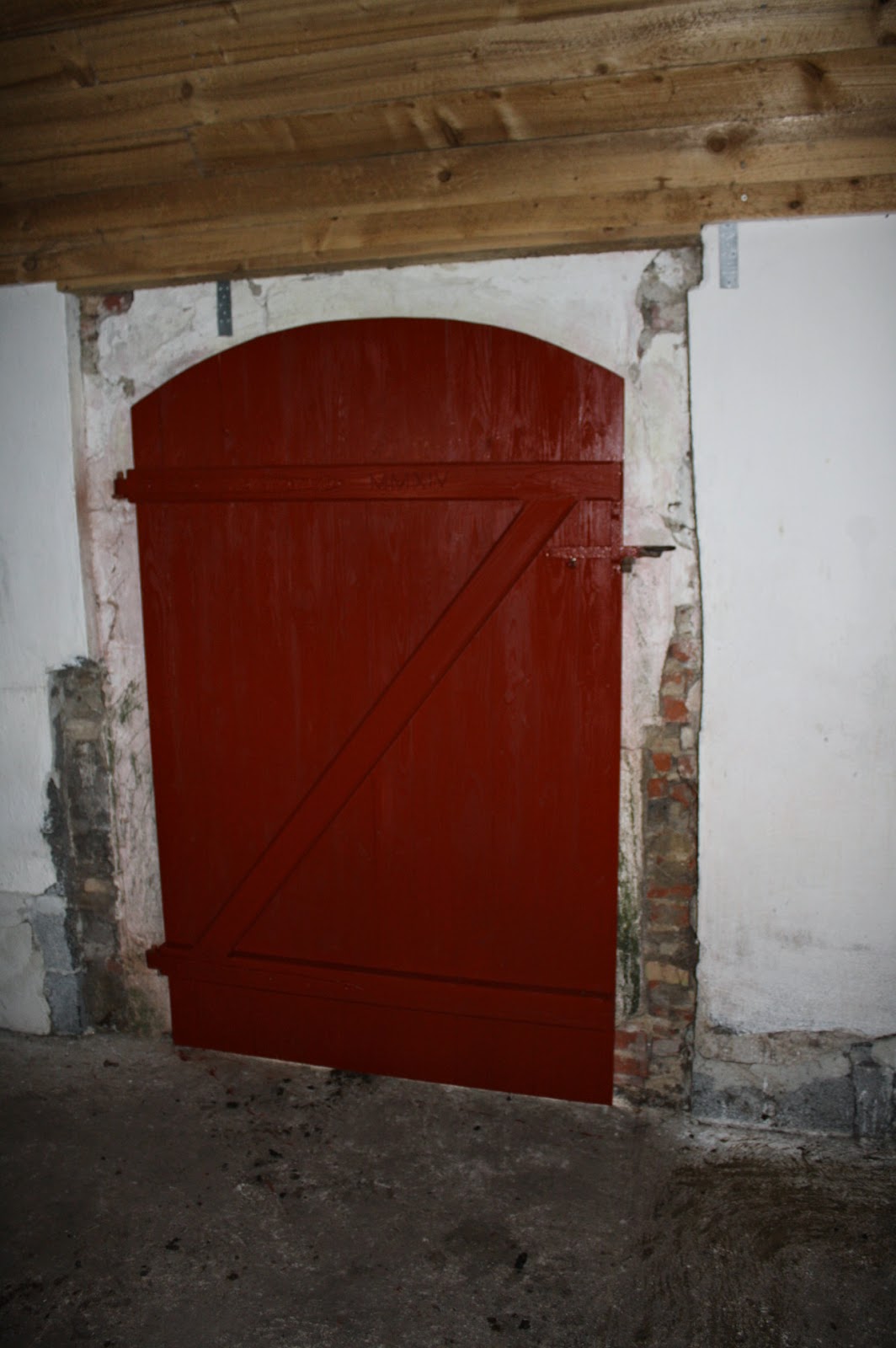 A door for the stable

Before leaving to sea last time, I started making a new door for the North side of the stable.
But I never got around to make an entry about it.
Now I am back ashore again, and I have worked on finishing the project.

Before starting the project I read up on the door making theory in "window and door making " from Lost Art Press. The descriptions were pretty close to what I figured, but the book caters a little bit more for front doors than stable doors.
I also checked "Das Zimmermannsbuch", and there were some gems too.

The door leads from the stable to the paddock, and it is very rarely seen from the outside by anyone except for the horses. And I actually doubt that they are much interested what the door looks like, as long as it is opened to let them in in the afternoon.

Ideally a door of this type is made out of tongue and groove boards, but I didn't want to buy any, so I decided that shiplapped boards would be sufficient. These I am able to make myself on the shaper.

The frame was drawbored together, and the first layer of boards were nailed to the Z shape. TO make room for a little wood movement, I placed a small piece of sheet metal between each board as I nailed them on. After nailing I removed the sheet metal again. This gives room for the boards to move a bit with each season.

The door is mounted directly onto one side of the wall, so there is no frame that it should fit into. This also means that the door won't close fully unless the wall is completely level and flat (which it isn't).
I wanted to use the old hinges, so I had to stick to the basic design of the old door. I think it is the original door, and it has held up OK since 1918, so the design can't be that bad.

After marking the outline of the door opening to the first layer of boards, I sawed out the curve and marked where I wanted my next layer to be.
A board was placed on the centre of the door, and the top layer boards were given a small moulding on the shaper. These boards are also shiplapped by the way.

I nailed on the second layer so the outside of the boards were flush with the line I had marked. Most of them were flush to the centre board as well, but a few of them had a little gap there.
My idea is that it is a lot easier to cover the centre with a moulded board, and thereby cover up any irregularities than it would be to make the centre perfect, and having to make a nice looking outside by sawing and planing etc.

After fitting all the boards, I chamfered the edges of the frame assembly. My crappy router managed to shift the bit while I was chamfering, so I had to plane all of them with a block plane to make them look almost the same.

I installed the door and finished by chiselling 2014 in Roman numerals.
Tomorrow I hope to paint it. It will be red on the outside, but I haven't really decided if it should be painted on the inside or if I should leave it natural. I am considering painting it white because it will help lighten up the stable. 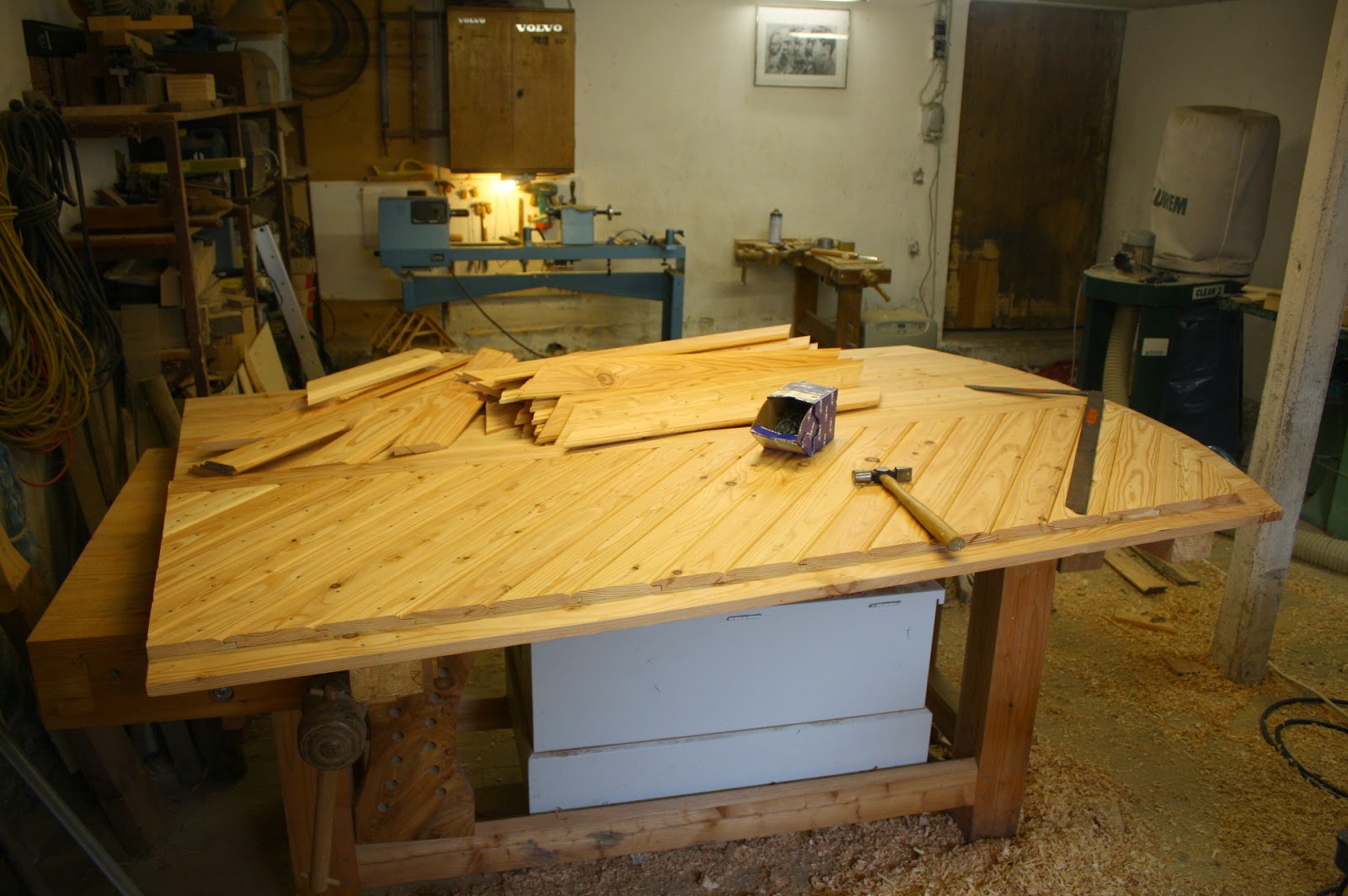 First side of the front is nailed on. 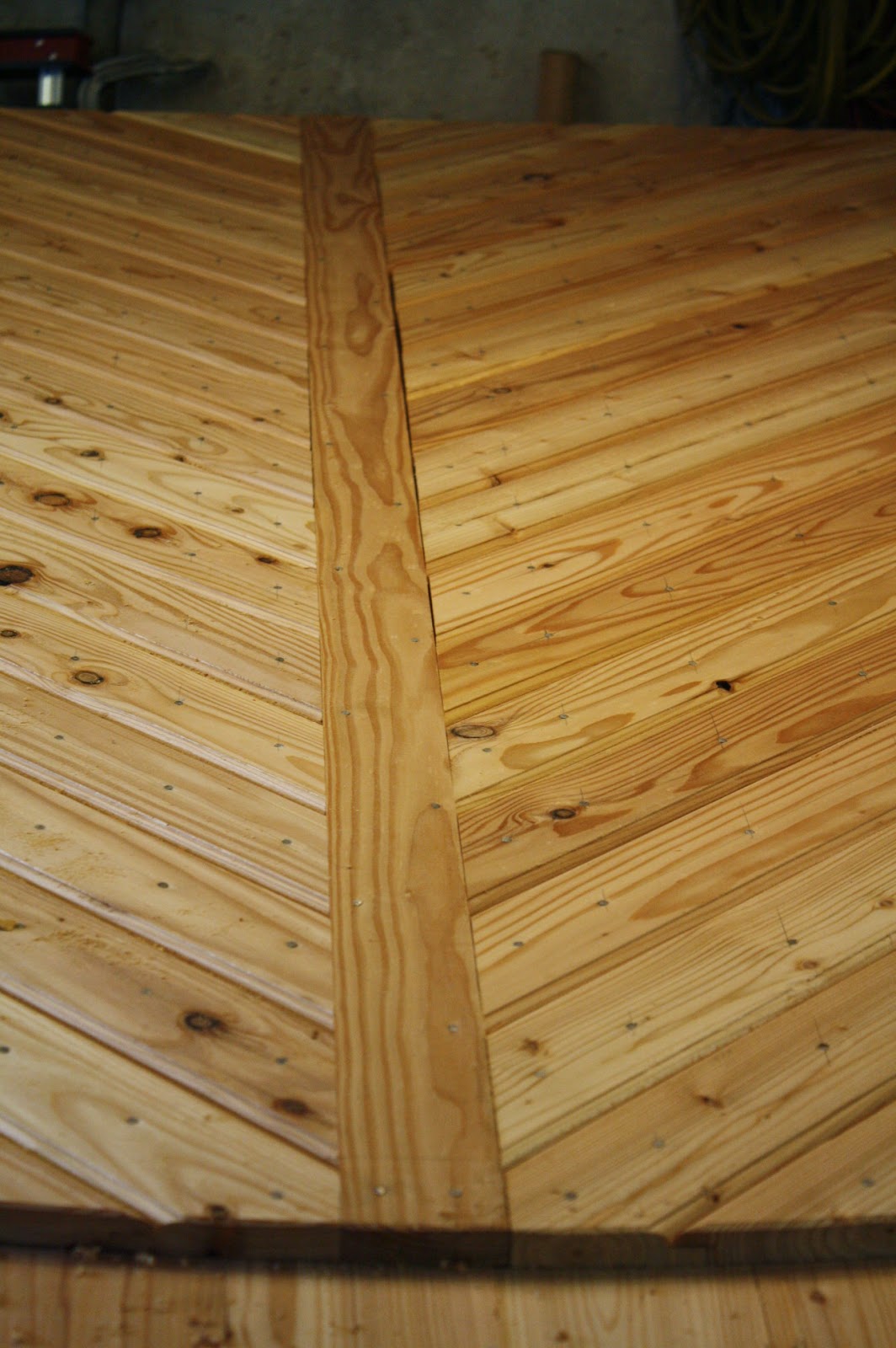 The front of the door showing the small gaps next to the centre board. 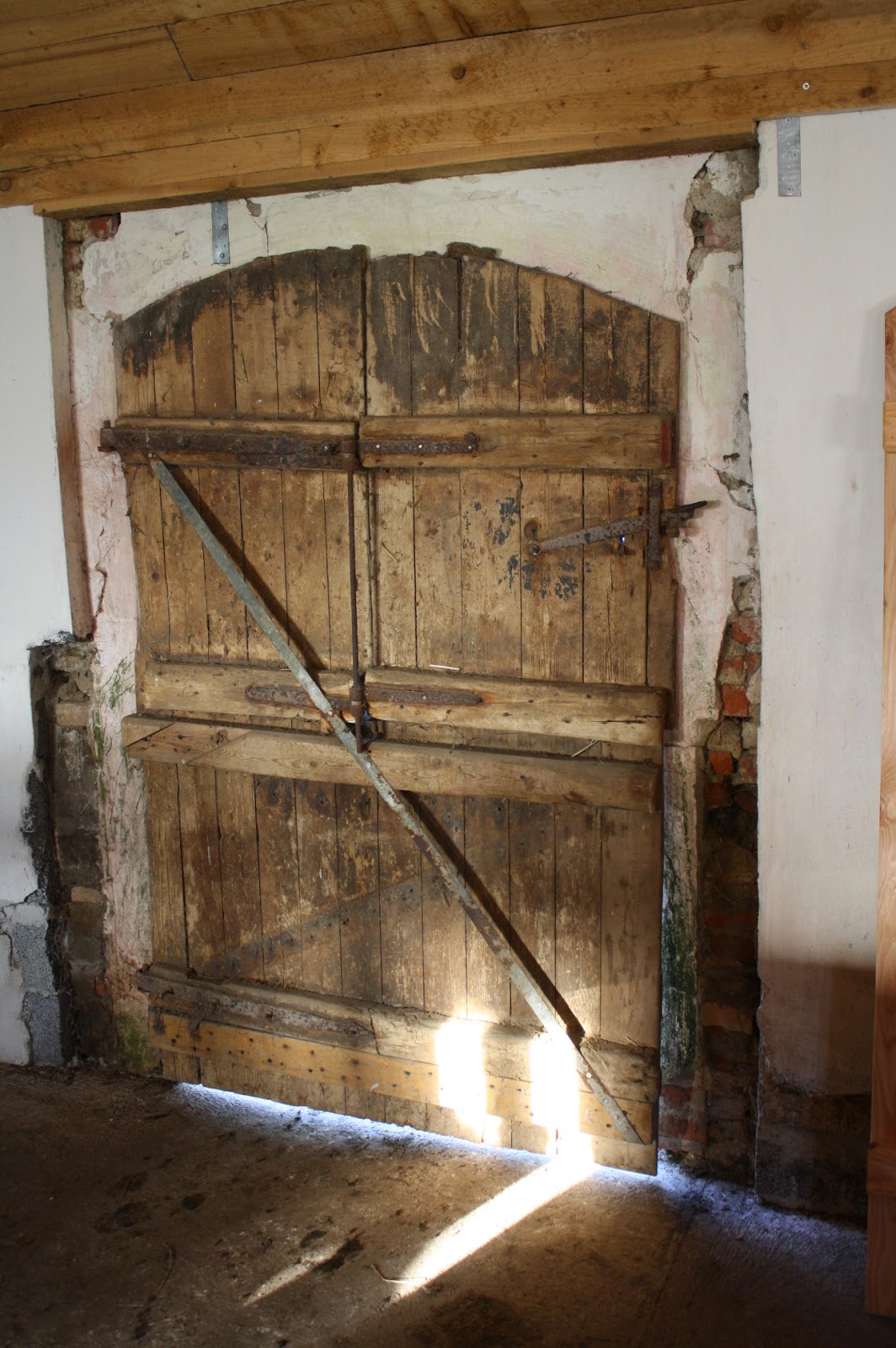 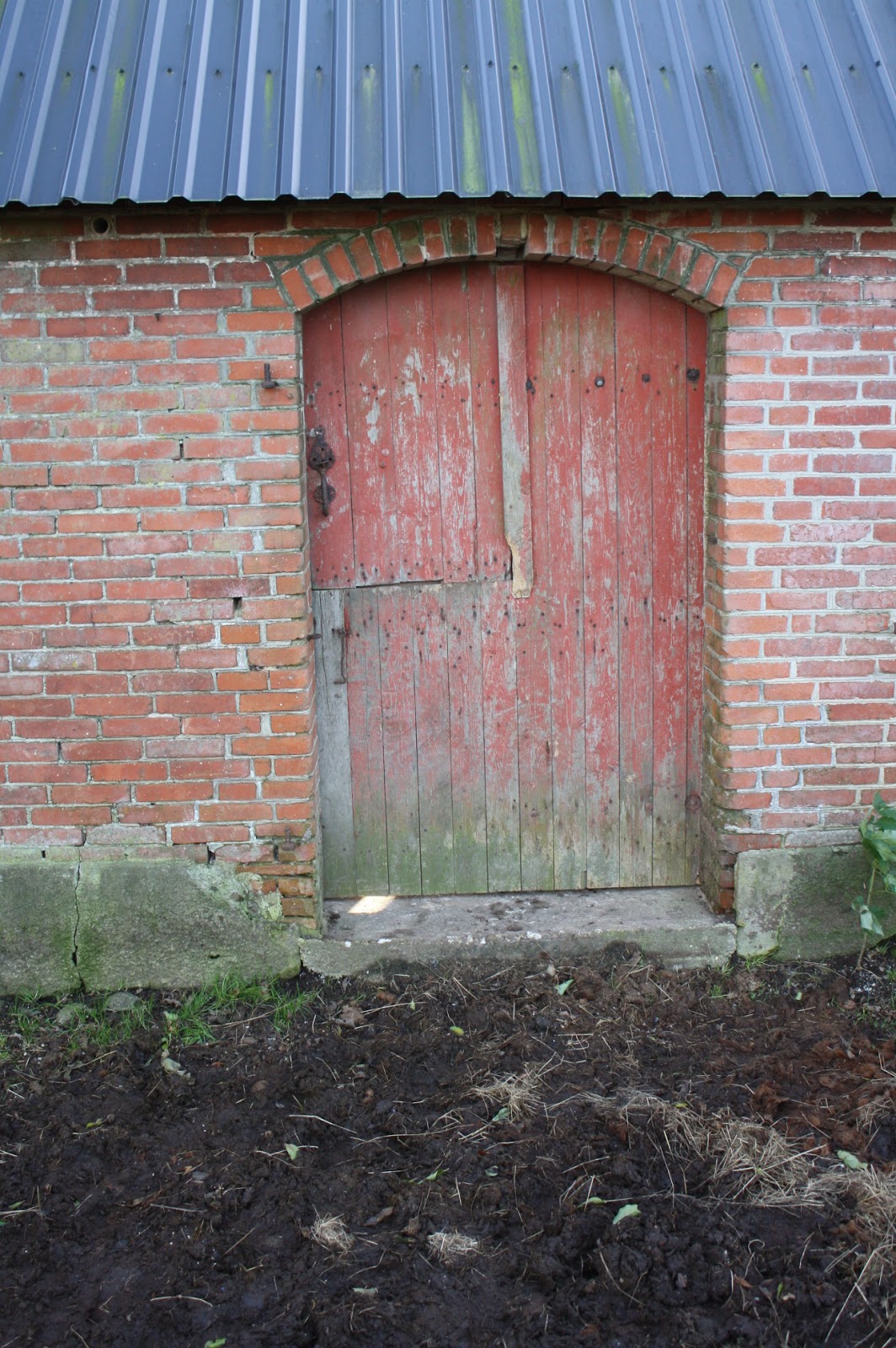 The old door form the outside. 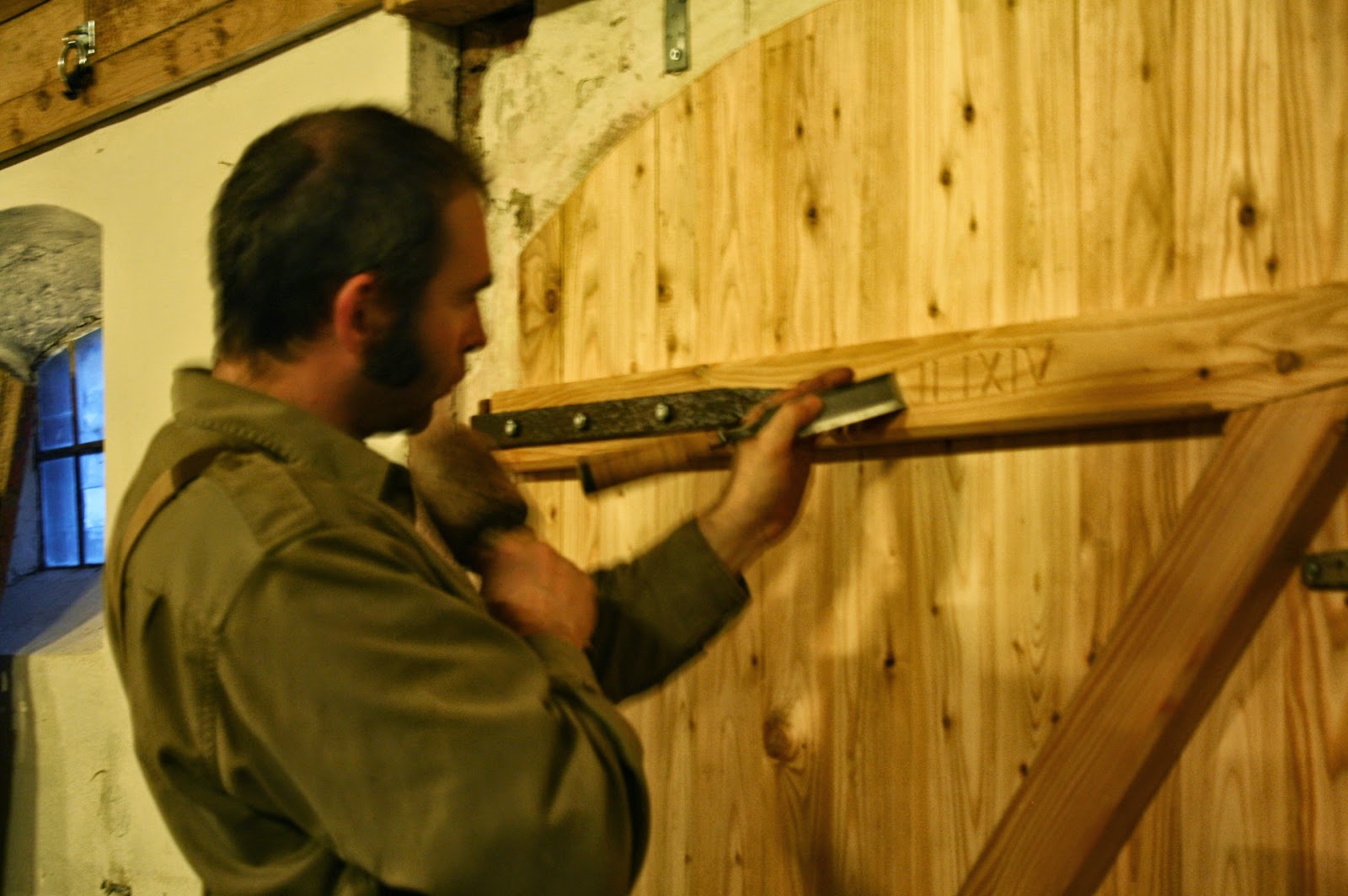 Sideburns and Roman numerals never go out of style.

I purchased this book from Dictum about 2 years ago upon a recommendation from Peter Lanz.
The book is written in German which makes it a bit harder (for me at least) to read compared to an English text.
The illustrations of the book are spectacular, and there is a wealth of information regarding how buildings were made around the turn of the 19th century.
It is not you typical timberframing book, since the architecture which is covered is more Jugend or Art Noveau style than most other books I have seen.
Sadly a lot of the information in the book is obsolete, based not on how things are supposed to be done, but based more on how we choose not to decorate most buildings of today. There are several suggestions and instructions for towers to be placed on roofs for decoration purposes. I don't think a house with that kind of decoration have been built in Denmark for the last 75 years.

The book covers projects from both ends of the scale, e.g. construction of a small stand for a market and in the "slightly" larger end an example of a circus building made out of wood.

There are a lot of tables in the book concerning e.g. dimensioning of rafters and joists.

Every time I have read in the book, I am kind of saddened by the loss of decorative elements on most architecture today. But I am afraid the costs would be very high if something similar was to be made today.

The book is not one that is read cover to cover, but more used like a handbook or for inspiration. It can also be read as a document of an architectural period which is still visible in many old towns in central Europe.
I would recommend it just for the fantastic illustrations alone, but I have used it as a handbook as well during a project of constructing some stairs.

Email ThisBlogThis!Share to TwitterShare to FacebookShare to Pinterest
Labels: Review

After the glue had dried I sawed of the majority of the excess of the small piece of oak.
I then used a file for further shaping of the damaged piece of the handle. When I was satisfied with the rough shape, I found some sand paper and spent a long time sanding the tote. I didn't want it to be possible to feel any transition between the two species of wood.
I ended up sanding to grit 280 which is the finest grit of emery cloth we have out here.
The contrast between the oak and the rosewood looks OK to me. It is an honest repair job that I haven't done anything to hide.

For some strange reason we have some varnish on board that is actual wood varnish. Sadly the lid doesn't fit very well, so most of the thinner has evaporated. The consistence is a bit like maple syrup.
I decided hat it was probably still better than electrical insulation varnish, so I added some to the knob and the tote using a small piece of soft foam that I took from a spare piece that once protected some electronic prints.
The varnish being so thick resulted in a very fast drying time and subsequent less than ideal flowing of the surface.
3 coats looks nice, and I don't mind that I can see the "brush" lines from my small piece of foam.
There are a few nibs on the front knob, but I guess they'll wear off when I start using the plane.
Otherwise I'll rub it a little using a scotch brite pad or some steel wool.

I made a new screw for the front knob using the old stud. I didn't have any taps and dies so I could make one from scratch, so I just turned a new brass head on the lathe and silver soldered it to the stud. Later when it had cooled down I sawed a slot using a hack saw.

The rear tote moved slightly even after I had tightened it. I remembered seeing a trick by Paul Sellers, where he is adding a small patch of anti skid mat (probably not the correct name) between the bottom and the tote.
Anti skid mat is something that we have plenty of out here. In Danish it is called "slingredug" meaning a tablecloth for when there is rolling and pitching.
Anyway, I cut out a small piece and put it under the rear tote - That really made a huge difference! The rear tote feels rock solid and since our anti skid mat is blue, it doesn't show too much.

Finally I sharpened the blade using some emery cloth instead of coarse grit stones, and finished of using my old fine grained oil stone (I have no idea of the grit of that one).

I made a few test swipes on a piece of spruce, and it works just fine. I am already longing to try it out at home on a decent workbench.

Conclusion to the rehab:
The most work was on the broken rear tote, but taking my time I managed to glue the parts together and to make a nice fitting patch.
Apart from that it was mainly cleaning of the parts.
It is a job that can be done at sea without too much trouble. Most planes aren't too big to fit in a suitcase. The size and weight might be an issue if you move beyond No 5's
A set of taps and dies for the threads on the plane would have helped, I might have to purchase a set if I set out to fix another plane sometime.
The plane could have been polished a little more, but I kind of like to be able to see that it is approximately 100 years old. 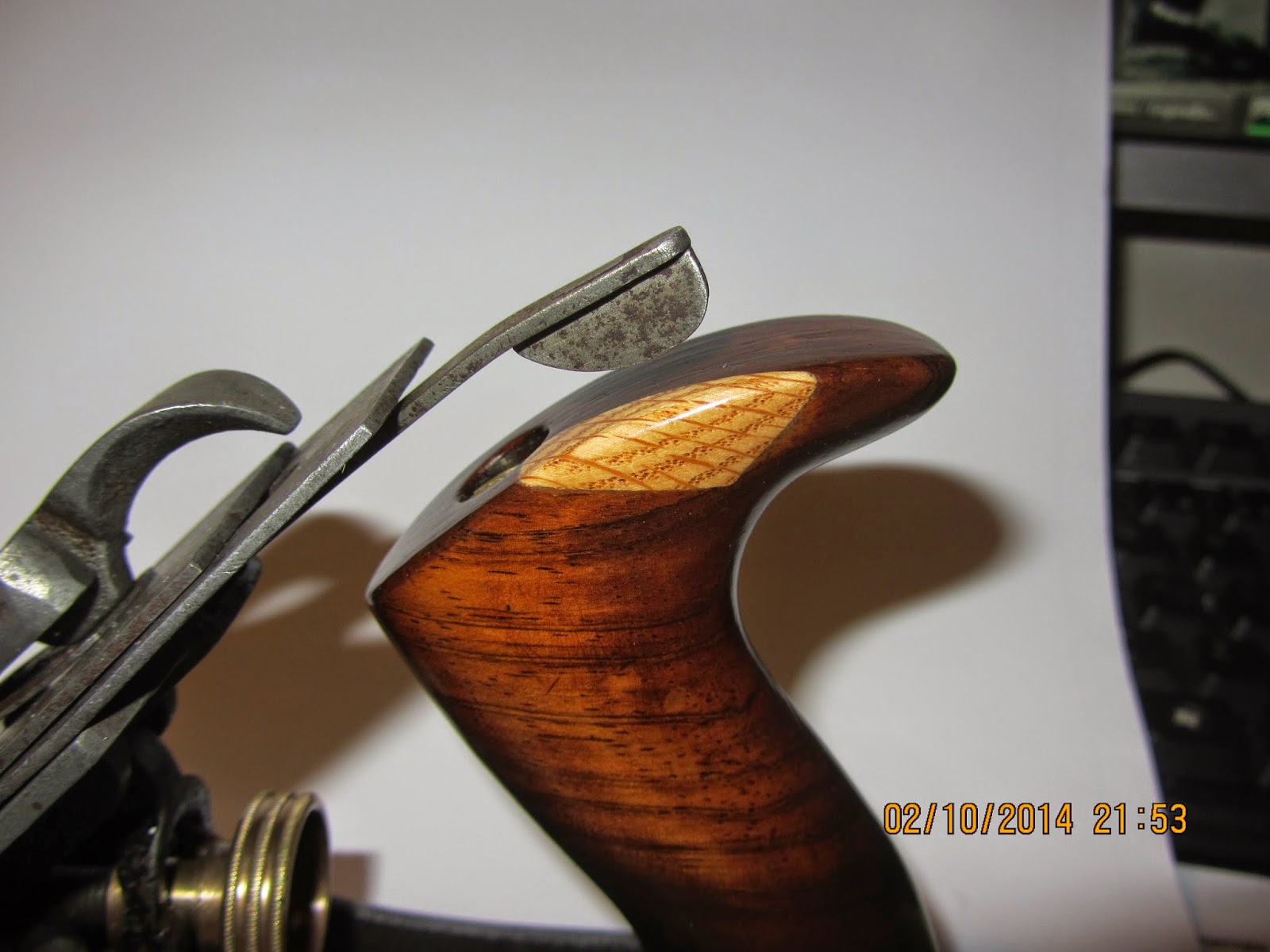