A small barn for the summer house 7, external boards

We have had a period of 2 weeks with very nice weather, so I have been having a great time at the summer house hammering on the small barn.

After the sub roof was installed, I spent some time installing some cement boards as a rodent barrier. I placed them a little distance apart and installed something called a mouse-band in between. this allows for ventilation of the lower part of the frame and hopefully it will keep mice out.

The next thing was to wrap the barn in wind proof tarred paper. Suddenly the house looked a lot more like a complete barn and not like a timber frame structure.
The tarred paper was followed by some 1" thick boards running vertical, to ensure a bit of distance between the external boards and the paper allowing for a bit of ventilation. These distance boards will also help to keep the paper in place once I start insulating from the inside, so it will not bulge out and touch the external boards.

Given that the timber frame has a lot of vertical posts, I decided to do something radical (for me at least): To install the boards horizontal.
I normally like to follow Swedish traditions regarding building practices, and they call for vertical boards, but since this design is inspired by an American barn, I thought that I would give it a try to install the boards the other way. It also means that I can nail them to the existing posts.

I managed to complete the front of the barn. The two sides are some 80% complete and the back is maybe 30% complete.

To protect a bit from rain I have covered the window openings with plastic, and I have mounted an old door as a temporary installation.

I would like to thank The Louisiana State University Agricultural Center for kindly making an incredibly interesting array of different plans available on the Internet.
I have no idea how that university is doing in playing football, but based on their building plans alone, they ought to win the national championship in football.
GO LSU footbal team!! 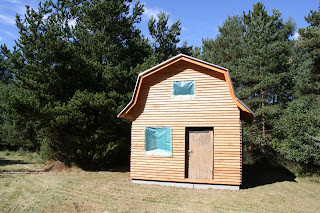 This is pretty much how it will end up looking. 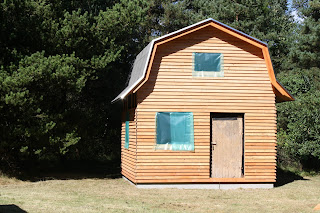 Too few buildings are made with gambrel roofs in Denmark. 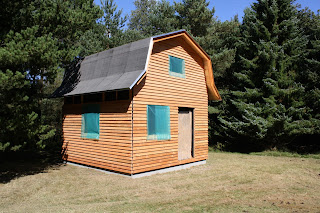 The sides still need a couple of boards more. 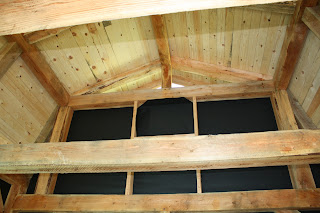 A bit of work still remains to be done inside.

A small barn for the summer house 6, sub roof

Today it wasn't raining, so I managed to burn on the tarred paper (bitumen + some weaving) on top of the roof boards.

Some time possibly next year my idea is to use some of the old roof tiles from our house on top of the sub roof.
But for the time being I'll just stay with the tarred paper roof and continue with the rest of the barn.

According to the weather prophets we can expect (hope) for some sunshine the next couple of days. So I'll try to keep up the pace. 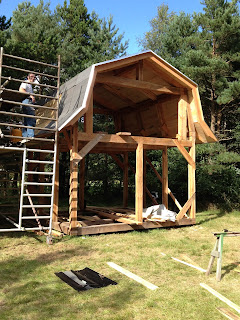 A small barn for the summer house 5, rafters

Back from sea and back from a canoeing trip with my brothers and all our children, I have returned to the small barn project.

The weather is as you would expect it from a Danish high summer: lots of rain and howling winds.. Not something that encourages you to work outside, but I like building this sort of thing, so I'll keep on anyway.

The children still finds it an interesting project, and they especially look forward to nailing on the roof boards, as that will yield instant recognizable results. 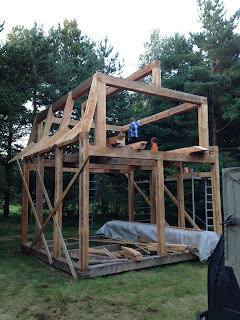 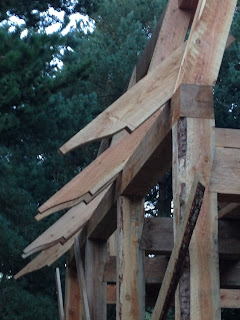 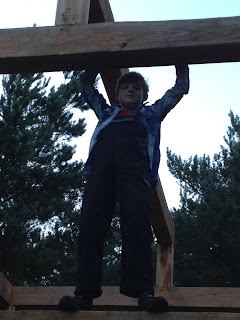 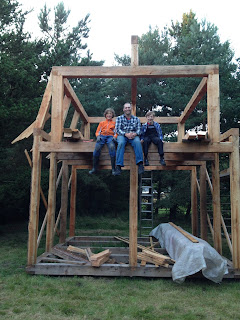