Before leaving to sea last time, I cast two more drafting whales, so I had a full dozen. Once I had done that I painted all of them. First a coat of primer and then followed up by a classic tractor colour: Massey Ferguson light grey.
That made the whales look nice and grey, but I was aiming higher!
I found a bit of white and painted eyes on all of them, and finally a little black made the pupils. I made a couple of whales that were "concentrating" on the task, and I also made a couple of whales who were rolling their eyes.

Since I wasn't going to use the drafting whales a lot, (and because I like making boxes), I decided on making a dedicated storage box so the whales could be protected between the jobs.

I dovetailed a little chest, and glued in a couple of strips to hold up the bottom.
The bottom was fitted with pie shaped compartments, to keep the whales apart to protect them from rubbing against each other.
A loose upper part was made the same way, but not glued in, now the chest could hold all 12 drafting whales.

A set of handles were mortised into the ends of the chest.

I also found a piece of larch wide enough to form the lid, but that was as far as I got that time, so I still need to make a lid and mount it.
Originally my plan was to paint the chest in some sort of marine inspired theme, but so far I would be happy if I just got the project completed.

There are as usual a lot of different projects requiring my attention, and this box is not very high up on the list. Instead stuff like getting the old Volvo Valp through MOT and installing tiles on the roof of the barn near the summer house are top priority. In addition to this there are a couple of confirmations (one of them is Asgers), and two limousine "jobs" with the Volvo Valp for my nephew and for Laura's prom dance.
But at least the whales are all done now :-) 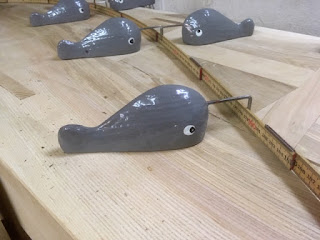 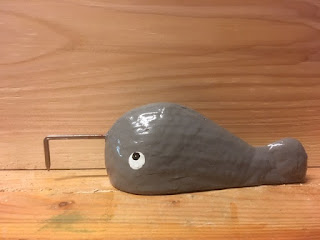 This little fellow just about had enough. 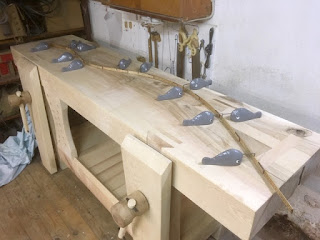 Holding a batten in place 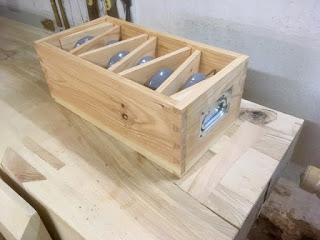 Email ThisBlogThis!Share to TwitterShare to FacebookShare to Pinterest
Labels: boat

As you might have guessed I have returned home, and have taken the time to fire up a computer once again.

I'd like to thank Brian Eve for doing a guest post in my absence, and it sadly looks like the days of Atlantic woodworking blogging are over for now. Our Internet connection on board the ship is really limited, and it also has to be shared with a large crew, so it wouldn't be fair to slow everything down in order to blog.
However.. This time it was special since a lot of the time was spent crossing the Atlantic from Norfolk VA to Bergen in Norway. Normally we'll be in port a bit more frequently, and I can probably blog from there. I just need to get my act together and get down to it.

While I was out travelling in the old fashioned way, I got an email from a gentleman called Anuj.
He runs something called feedspot, and he informed me that my blog had been elected as one of the top 50 woodworking blogs on his site.
I just checked, and actually my blog is No 44.  There are some woodworking blogs on the list that I know, and some that are new to me.

I hope that being on that list will generator some sort of traffic, from people that otherwise wouldn't have visited my blog. And if those people then further click on one of the blogs that I list - maybe one day someone will find a topic that will be of interest, and that person might build something.

Once again I would like to thank people that either run a blog aggregator like Norse Woodsmith, Unplugged Shop, Top 75 woodworking blogs or keep a list of blogs on the side bar of their own blog.
The more places it is possible to find a blog the better the chances of someone finding just what they never knew the wanted to try out building.