Our middle son Gustav is attending 10th grade at a boarding school. He has chosen this school specifically because it has got a very good equestrian line. It is possible to bring your own horse/pony which is what Gustav has done.

A couple of weeks ago he called me on the phone and told me that their math teacher had enrolled the school in a nationwide contest about building model houses.
There were some regulations concerning the design, such as maximum area, only one level of living space allowed etc. And the idea was that all the houses had to be drawn and built to a scale of 1:50.

I wished that there had been math projects like that when I was in school, because I believe that it is a lot easier to get kids interested and involved in learning something - if they can actually see a purpose of what they are being taught.

So with this project they are not only taught about scale - they get to experience it as well.

Gustav told me that he immediately remembered building those model houses when he was younger, and considered doing that again. But since I am at sea, I couldn't provide him with strips of wood, and I wasn't sure how much stock was left over from last time Asger built a model church.
Besides, the stock that I had made would likely not be fitting for a 1:50 scale build.

About a week ago I asked Gustav how the project was coming along, and he told me that he and his team mate had managed to saw out some strips on their own using an electric fretsaw/jigsaw. And they had made the exterior cladding out of Masonite board.

This Friday he called me and told me that their house had won the school contest, so now they had entered the national contest.
He told me that all the other houses at the school had been built out of model cardboard, this stuff that has got a bit of foam sandwiched between some paper. So their house had stood out really proud compared to all the rest.

Due to time constraints they hadn't had the time to make the roof, so their model was displayed with the rafters visible.
But he assured me that they had some more time to complete the house before sending it off to the final contest. So they plan on making a roof and also mounting some windows and doors.

I am proud that Gustav and Malthe won the school contest, but I am even more proud that those "house building seeds" that were sown five years ago have flourished and stayed within the brain of Gustav, in a way that he immediately connected model houses with building something out of wood in that way. 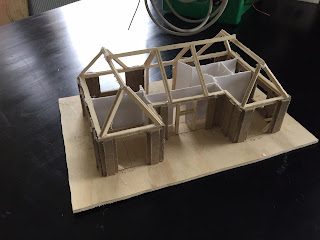 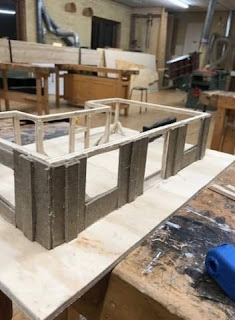