Staircase for the porch.

As some of you might remember, I built  porch a couple of years ago.
Mette wanted it to have a wide set of stairs gently sloping into the garden. The kind of stairs that you could sit on and have a cup of tea.
I milled some wood and told her that the wood needed to dry a bit before I would make such a complicated project as a staircase out of it.

The following year she asked me what the progress was on the staircase, and I could truthfully tell her that the wood was still drying inside the barn. And that the thickest pieces were 3", so as a rule of thumb, they should dry for at least two more years.

Last year she didn't ask about the staircase, but casually mentioned that she was looking forward to getting one someday.

This home period she told me after a day or two that: the weather had been so nice, that now was the time for getting the staircase project started, and besides according to her calculations the wood had been drying the prescribed 3 years! So I couldn't use that as an excuse anymore!

I was pretty much speechless (which happens very seldom to me). I guess that is the "problem" with having a wife that is smarter than you  :-)

In a situation like that there is just one thing to do: Start building the project.

The wood for the stringers was jointed and planed, and the wood for the steps themselves was merely planed on one side.
The old temporary set of stairs had actually worked pretty well in terms of rise/run of the individual steps, so I stayed pretty close to that. I ended up using something like a 6"11/16 rise over a run of 11"5/8 (16.9 cm rise and 29.5 cm run)

Originally I had envisioned making a complicated project with Japanese joints etc. But I forgot how I had actually planned to execute that - so instead I tried to make it a simple but well functioning project instead.
To do that I cut some triangular blocks out and screwed them onto the stringers. That way I kept the full strength and could hope that there would be very little sagging once complete.
The triangles were aligned by help of a piece of string of which the outermost layers were "mysteriously" chewed into short sections. I can't say for sure who did it, but there were some impressive bite marks that "might"? correspond to the set of teeth in Bertha's mouth. That could also explain why the roll of string was suddenly found beneath the apple tree and no longer on the porch itself.

With the triangles in place it was all downhill from there, mounting the steps and later wrapping it all up in some thinner boards. I made a hatch on the corner, so that it will be possible to get below the porch at some point, if someone drops their keys etc. and they will fall through the spaces in the decking.

The final part of the project was to treat it all with some wood preservative and give it a coat of wood protection. (It is what the rest of the porch has been treated with). It will all go grey after a year or so in the sun anyway.

The best thing about the project is that it is now complete, and I have gotten rid of the stack of lumber sitting next to the mulesaw for three years.
The staircase is rock solid, and I asked Mette if she would be OK with me testing the strength by driving a Volvo Valp up the stairs and onto the porch? She said no.. Because now it looked nice and she didn't want the surface to be covered in tire tracks. I am still convinced that it would stand up to it and it would make a cool little video. 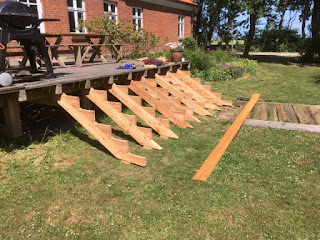 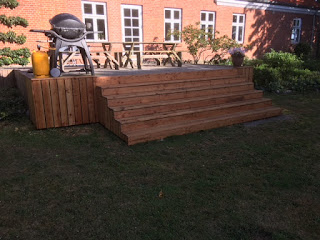 Project completed (and no tire tracks)

While I was home this time, I received a picture of the Smith & Wesson revolver in its new presentation case.

I am happy to see that it did indeed fit because I only had some rough measurements to work out from.

I had imagined that the small compartment could have been used for a "quick loader" (or what the name is), but I don't know if my friend has got one of those, so for now he has stored some more ammunition in there.

I am kind of tempted to make another presentation case, because it was an interesting project. But I might try to order some baize next time to use for the lining instead of hobby felt. 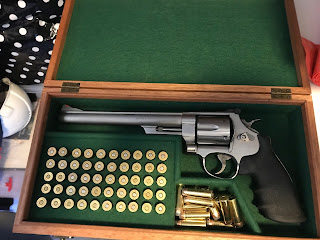