Yesterday I planed a base moulding, and the result was even better than the first one I made. The design was a bit different, with two coves, so a bit more sanding.

I also sanded the first moulding, because I figured that if I had to make a scratch stock, I woudl get all caught up in that and spend a lot of time on it. So instead I wrapped some sandpaper around a piece of an old bolt and sanded the internal rounding. It didn't take that long, so I am convinced that I have saved time.

Today I deemed the material for the door to be dry enough to work on. It wasn't soaking wet when I took it inside, just some water on the outside of the boards.

One of the boards from the pallet side was very clean and had only two very small knots that were placed in each end of the board, so that piece would make a perfect raised panel.
Another board could give a couple of stiles, and finally there were two smaller boards that could each give a rail.

I started by cutting the rails and styles a bit over length, and then rived them to 2"3/8 width. I then proceeded to plane them to the same thickness, and finally clamped them together and made them the exact same width by planing the edges all at once.
After deciding the orientation of the individual pieces, I planed a groove for the panel in each of the pieces. Since my grooving plane only has a narrow cutter, I planed two grooves next to each other to end up with a groove close to 1/4".

I laid out the pieces on the carcase and took the measurements directly from there. there is less chance of messing up the size that way.
My idea was to use haunched tenons and stopped mortises.
So after marking out the inside length of the rails, I added roughly 3/4" to each end and sawed them to that length.
I used the groove for determining the thickness of the tenon, and made the haunched part a bit too long, so I could trim it once I had made the mortise.
A bit of sawing and paring, and the tenons were complete.

I marked out the location of the mortises by inserting the rails in the stiles. Once I had the mortises chiseled out to the correct depth, I tested the fit and trimmed the haunched part of the tenon to its final length.

When the frame was complete I dry assembled it and marked out the stock for the panel directly from it. I added a bit less than the depth of the groove to the marked area, and sawed the panel from the board.

The next task will be to make a raised panel. 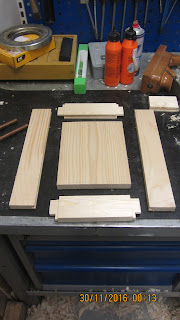 Parts of the door.