A small barn for the summer house 9, painting the windows.

After preparing all the individual pieces for the windows, they were assembled. I used a plane for adjusting the size to a pleasing reveal all around each one of them.
The flat parts of each window were also smoothed with a plane, to ease any small differences from the manufacturing.

I consulted Olav for some advice, and he suggested that the traditional way to go would be to coat the rabbet for the glass twice with shellac prior to painting and adding glaziers putty. The reason behind this approach should be that the shellac keeps the putty "soft" longer, because it prevents the linseed oil from migrating from the chalk and into the wood.

While I am not be someone who dives into testing new stuff, I am normally ready to try out something old and tested straight away. So I took Olavs advice and used up the remaining shellac mixture I had left over from the travelling bookcases.
While I was at it, I also coated all the knots with shellac.

The hardware for the windows look good in my opinion, but it is the most traditional way to cover it in paint as well, that actually made painting a bit easier, since I shouldn't try to avoid getting paint anywhere.
For the painting itself I have strapped a frame to the workbench and mounted the windows on it. That way I didn't have to invent any work holding for the painted windows. The outside of each frame will not be painted since it will be hidden inside the wall. So it seems to be a fairly efficient way of doing it.

The biggest obstacle was Bertha who found it incredible interesting that I was mowing a small paint brush up and down, so she came close to have a look. I managed to get her ushered away with only a few white parts on her coat of fur. 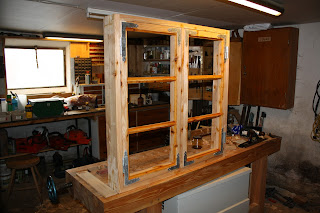 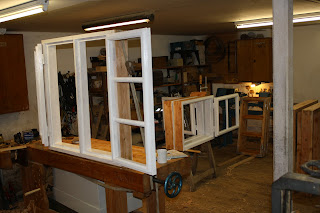 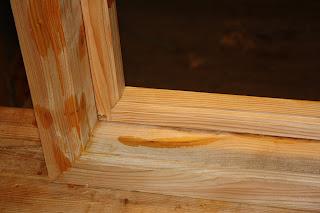 Inside corner with shellac applied.