Making a handrail for my dad

My dad was in a bad car crash last year. For some inexplicable reason he suddenly found himself in the wrong side of the road, and with an oncoming truck, it is a miracle that he managed to swerve the car to the right, so that instead of getting hit head on by the truck, instead it smashed the left side of his car.

He was incredible lucky to survive, and he had remnants of orange paint on his jacket from the truck, so a few more inches and he probably wouldn't have made it.

He was hospitalized for some time, and they discovered an internal bleeding in the skull, but the doctors believed that it was so small that it would stop on its own. He ended up getting pretty much back on his feet, and all was fine until the summer.

During the late spring and the summer his balance got gradually worse. And it culminated when my ship was going to Aarhus for the Tall Ships Races. My dad wanted to come on board and see the ship, but he got ill while waiting for us to berth, so I went to the first aid station and picked him up. When we walked the short distance to the ship , say maybe 250 yards. I became aware that he was constantly pulling to the left. I supported him and was afraid that there was something wrong, since it was like he had absolutely no power or control over his left side.

When we got to the ship, I got the doctor to check up on my dad, and he couldn't really find anything wrong, so we all decided that he was perhaps just tired and needed a nap to sort of digest the incident with getting ill and getting help from the first aid helpers of the arrangement.

A couple of hours later I woke him up, but he was confused and not better. So after consulting the doctor again, we decided to call for an ambulance.

With the help of the police, the ambulance was able to get through the massive crowd of people to where our ship was berthed, and he was then taken to the hospital.

At the hospital they first gave him some pain killer to ease of the fever that they discovered that he had. They then did a scan, and it turned out that the bleeding inside the skull hadn't stopped after all as the doctors on the other hospital had expected. So they kept him for a couple of days to get him ready for an operation to relieve the pressure on the brain.

They drained approximately a quart cup of blood out from inside his skull. No wonder that this treatment did a lot of difference. Now he could suddenly feel the left side of his body again.

Over the last two months, his health has suddenly started to deteriorate again. He lost his balance and his appetite and has begun to become a bit confused. He had a scan, but according to that there is no signs of an internal bleeding in the skull again. He has been checked by his own doctor and he is going to a specialized department at the hospital this week and seeing a neurologist next week. So I really hope that they will be able to find out what's wrong with him.

He now has such a bad balance and health that he has been temporarily assigned to a nursing home to keep him out of harms way by falling at home and maybe breaking an arm or a leg. This just happened over the course of one week.

He voice sounds like he is drunk when I call him on the phone, and it is really not a good sign as far as I know.

A week or so before he was assigned to the nursing home, I visited him to help him mow the lawn and clear the trimmings from the hedge that he and his neighbour had cut a few days earlier. He had fallen a few times at that point, so we decided to make a hand rail for the stairs leading from the scullery (back door) and into the kitchen.

It struck me as a bit sad, since it was the first time in ages that I did some woodworking in my fathers shop, and now I was suddenly making a handrail because he is getting old.

It wasn't a super fancy or striking elegant piece of work, but I had to make do with what I could just find, and besides I had come down to visit him and talk with him, not to immerse myself in some high end woodworking. We found a piece of dry ash that could be made into a nice handrail, and my dad had a couple of brackets for attaching a it to the wall.

It worked great for that coming week, and I really hope that he will get well again so he can return to his own home and then continue to use it for many years to come. 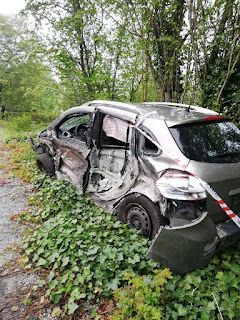 The remnants of my dads Renault Clio 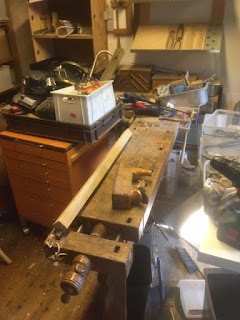 Rounding a piece of ash 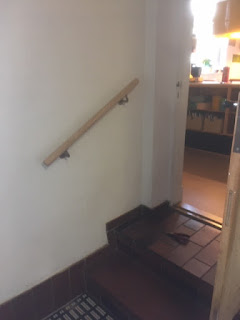