We have been severely pestered with bad weather. The North Sea is no joke during the winter months. You can't sleep properly, and a lot of work functions are also limited due to the constant an rather violent movements of the vessel. This includes woodworking during the leisure time..

Today we have been sailing a course where the ship hasn't moved too much, so I decided to do a little woodwork as a Saturday treat.

I started by shooting the ends of the carcase boards. The lid for my little tools chest is also a shooting board. After shooting the first end, I checked with an angle, and found that the shooting board was more off than last time. I rectified the problem by placing a little bit of cardboard behind the carcase board, an easy and quick solution. The boards ended up looking fine and each board in a pair had the same length.

the dovetails were laid out using my cardboard dovetail marker with a 1:6 angle. The back dove tail is thinner than the other to help conceal the groove.
The weather was still OK, so I decided to start sawing out the pins.
Normally I prefer the tails first approach, but due to the limited work holding out here, I go for the pins first.
I used a hack saw with a almost new blade in it. Actually I doubt that it has been used since last time I was out here, and used it as a tenon saw.
I find it very easy to use a hack saw for dovetail saw. It has a nice weight to it, so it will work its way down the wood just fine. The teeth are fine I can't remember if it is 18 or 24 PPI. If the blade is dull, it takes only a short time to replace it, and the saw is sharpened for rip cuts.
The only backside is that the kerf is a little wider than it would be on a normal fine dovetail saw, but I don't mind.

I chopped out the waste between the pins and left it at that. The weather has turned worse, and there is no point in risking to mess up the carcase by attempting to make the tails during a lot of waves. 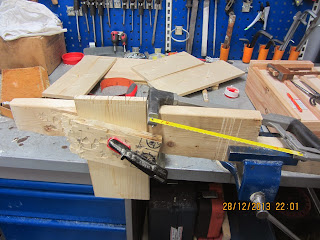 The first pins are sawed.