I had glued up 4 boards to form the lid, so in my mind I just had to do a bit of smoothing, mount some breadboard ends and be done.
The reality was a bit different. The lid had warped, so I had to struggle to flatten it. A thing that really didn't help was the size of the lid. I could barely fit it on the workbench, and it scooted around because I couldn't place it in a single position that would enable me to plane the entire piece.

After a lot of time and cursing I decided that it was flat enough. The problem was that it wasn't the same thickness all around.
The top of the workbench is not flat, and I didn't see any point in continuing knowing that it would hardly get any better, so the lid just had to stay that way.

I marked up for some breadboard ends, and the first one didn't fit very tight. I fiddled some time without any obvious improvements, I mounted it hoping and expecting that the second end would turn out better.

At first the second end really did fit better, but the first dowel that I drove in burst out a huge chunk of wood from the backside. I guess the board is a bit punky.
The second dowel broke before getting through the board, but the third one came all the way thoguh as it should.
It bothered me that the second dowel never went all the way, so I decided to remove it and install e new one.
A drift pin, a hammer and a smart blow Took care of the problem with the dowel stealing all the attention, Instead the new attraction was the 6" long and 1.5" wide chunk that separated from the breadboard end. And somehow the dowel managed to stay put.
More cursing..

I squirted some glue in the crack and put a clamp on it. There was no point in trying to do anything abut it until the glue had set and I had cooled down.

Next I turned my attention to the carcase and did a bit of planing in a vague attempt to level the dovetails and the ends of the backboards.
Again the work was obstructed by lack of workholding, a not completely flat floor etc.
The back was the last thing I tried to plane. I decided from the start that I would only use the scrub iron on the back, because there had been enough misery already. The back ended OK, with clearly visible diagonal strokes from a scrub plane. At least it will show that it is handmade.

A set of skids were mounted under the bottom, and this part went without any hick-ups at all (very strange).

The glue on the lid had dried sufficiently to continue with that part.
I used a saw to cut the lid to the correct length and to remove the parts of the breadboard ends that extended a bit. Some planing actually made it look pretty good, almost level and fairly square.
So I decided to make a bull nose profile on all the edges.
A bull nose profile is hard to mess up, unless you make the rabbet too deep, so it will terminate at the same depth as the groove in the breadboard end. If you do that the result is clearly visible.
If you also ad a some grain blow out due to rabbeting cross grain you will know why there was even more cursing.

Finally I installed the hardware which didn't cause any real problems compared to the earlier difficulties I had experienced. 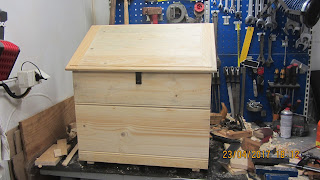 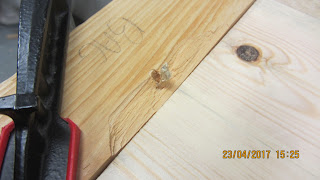 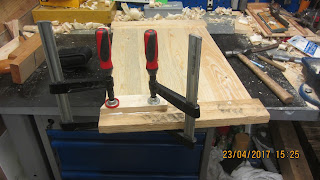 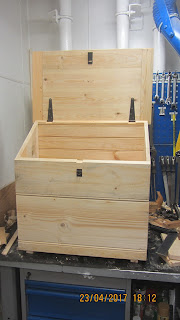 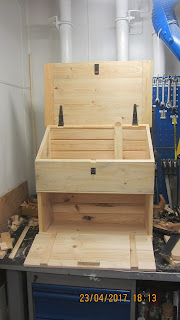