I really ought to start working on something.

A good thing about growing up is that once in a while you can recognize a pattern if it has happened before. If you are sufficiently smart - you might even know how to deal with it based on last time you experienced the same thing.

If I don't do any sort of woodworking for a month or so out here, I inevitably end up fantasizing about projects whenever I have to stay put in the control room due to the ship being within the 500 m zone of an offshore installation.

Normally I tend to concentrate my thoughts on one type of project: Boats, Timber framing, workbenches etc.
But other times like this period, I have considered almost all of those regular projects. Plus a few other  ones.

It started out with hydroplane boats, (I will probably build one of those when I get home)
Then I sort of shifted into timber framing for a couple of days, and then suddenly I was considering doing a backsaw project.

After sketching and thinking about backsaws for a bit of time, the most natural course for my imagination was to work on how to make a saw tooth stamping machine.
The saw tooth stamping machine was strangely stopped by the logical part of my brain (a very small part) after convincing myself that I could most likely make a couple of saws before even finishing the machine, if it had to work all right.
On a side note, one of the ideas was to use the lathe, and have the blade revolving in a clamp-type structure. Then I could use the screw cutting pitch to make the teeth.

I have a couple of backsaws at home, and I doubt that I will ever wear them out, so while it is still fun to build one, I wouldn't know what to do with it. Except for putting it in the Sunday tool drawers together with the other tools that are so nice that I can't really get my self to use them on a daily basis.
(LN planes, my infill smoother, the dovetail saw from Two Lawyers Toolworks etc.)

I started looking at older entries on my blog, and somehow I ended up looking at the infill smoother I made last year. I haven't used it a single time! It took a long time to build, and there wasn't much wood involved. But somehow I managed to convince myself that it was actually a nice cosy manageable project to do again. But who needs two infill smothers?
I suppose that I could make a block plane sized infill, but I didn't really see the need for that.

Making an infill would also require me getting some brass and some decent wood for the project, but I could bring that with me for the next time out here. So those obstacles couldn't stop my brain from keeping on with that imaginary project.
So I started loosely sketching an infill chamfer plane. After some time I decided that it would probably never see any use due to my two Japanese chamfer planes that work brilliantly. So it would be a waste of time to build one.
But if I on the other hand made an infill moulding plane, then I would have something that would look fine, and maybe occasionally see a little use.

More sketching, and suddenly I had this small prospective infill that might be possible to build.
The only example I could find online of a similar plane was a guy in Finland who has made an infill with exchangeable irons. Kind of an infill combination plane. I on the other hand want mine to just be a small square ovolo shape.

I can't really think of a good explanation to why I should build an infill ovolo plane other than it would make a pretty little plane, and it would be fun to see if it was possible. I have tried to weigh the pros and cons regarding if it should be a sprung type plane or an unsprung type. So far it seems as though the sprung type will be a bit easier to make as an infill type. But that could easily just be my desktop dreams that fools me.

Another option is to stop inventing new strange projects, and just wait for the trip home, and then next time start a nice little box like project. That is definitely the most sensible thing to do based on my vast experience in this type of situations.. 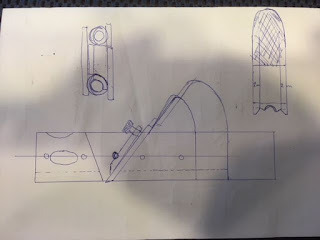