Making a project in the shop with Laura

A couple of months ago Laura and I got into talking about woodworking. She surprised me by saying that she would have liked to learn how to make something while in school.

Nevertheless, she expressed the interest of making a project in the shop if it was possible.

She acknowledged the fact that no one had ever been prevented from going to the shop at home, but she just felt that now she actually would like to do it, so if I had any suggestions to what she could make, she would like to do just that.

Now this isn't something that happens everyday!
An 18 year old high school senior girl expressing a genuine interest for building something.

It didn't fit into the schedule last time I was home, so I hope that we can do it next time I am home.

My criteria for the build was that it had to be something that we could do in a weekends time. I will take care of the stock preparation ahead of time - to ensure a steady workflow.
I made a list of possible projects that she could make, and I mailed the list to her.


These are the same links that I sent her, just so she could get an idea of what I was suggesting.
Brian Eve suggested the six board chest.
It dawned on me that even though I have built a Roorkhee, I only have a semi hidden picture of it on my blog, but Brian has several Roorkhees, so I just linked to one on his blog instead.

After looking at the list for a couple of days, she has decided that she would like to make a Roorkhee chair.
I think it will be a great project to do together, no intricate and complicated joinery, and it is a project that is highly usable.

The only problem is that there's still some time before I go home again, but I am already looking forward to that project.

Since she has turned 18 I was in doubt whether or not it would be OK for me to label this post as "Childrens projects", but I take the chance. 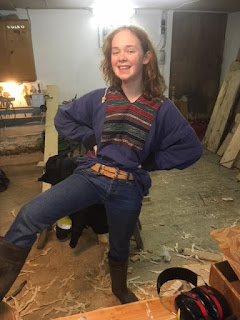 Laura displaying a belt that she made. 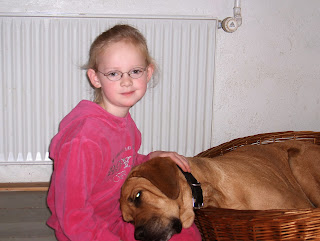 Laura and our first dog "Børste"