Time for a new job

I have worked for Troms Offshore for the past five and a half years, and I have had a great time. There have been plenty of nice colleagues and I have even managed to sneak in a woodworking project or two during these years.

One of my coworkers forwarded a job ad two months ago, and while I wasn't really looking for a new job or planning to change jobs, this particular job seemed interesting.
I got so curious about it that I did a bit of research, and ended up sending an application. I truly hadn't expected to hear from the company again, since it was sort of a very special job with a high number of potential applicants who might have a better chance than I did.
I told myself that at least I had sent in an application, and I would be happy for whoever landed the position.
And since I like it here in Troms Offshore, all would still be well no matter the outcome. Actually I was pretty sure that the pay was lower in the new job, so it really didn't matter much.

To make a long story short, they called me one day in the end of November, and I accepted the job despite a lower salary.

Most people tend to move towards better paying jobs and newer ships.

I on the other hand have done the opposite. In even manage to live up to my motto "Being old fashioned, the cool way".

My new job is as chief engineer on board the Statsraad Lemkuhl, a ship built in 1914.
The ship is run by a fund, that has got the goal to keep the ship active, and I read somewhere, that it is one of the tall ships of the world that has got the most sailing days per year. That appeals very much to me, since the ship was built for sailing, and not for being in port like a museum ship.

It will be a new experience for me, but like trying out new techniques, it can't hurt to use you brain once in a while to learn new stuff. Another good thing is that the ship usually visits USA once every year, so that is a bit of an adventure on its own. 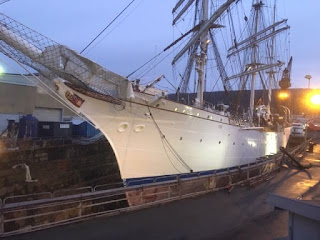 The ship is in dry dock prior to this years season. 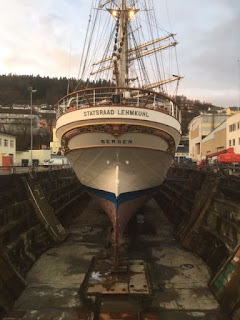