During my final trip on the Troms Capella, I used the ships lathe to turn a tap for making wooden threads.
It makes a 2" thread with a pitch of 4.5 modules. Modules is actually just a fancy word for Pi mm, so the thread is 14 mm or pretty close to 9/16"

It seems as though I only took one picture while making the tap, and now it is at home, so I can't really take anymore pictures of it at the moment.

The tap worked really well, despite ash not being the easiest wood to turn a thread in.
After making the internal threads in the legs, I watched an episode of Roy Underhill, where he makes a die for wooden threads.
I basically copied all he did, and though I couldn't do it as fast as him, eventually I ended up with a die that could produce a thread.
The first spindle looked utterly magnificent, with the slight but important part - it didn't fit..
I had to do quite a bit of adjusting to get the die working in a way that produced a spindle that would work. But finally I had two spindles (made out of whitebeam).

I turned a couple of ends for the spindles out of some apple, and glued them on. Then a hole was drilled through, and a couple of sticks were turned and inserted.
Those sticks were retained using small ebony pegs, so technically I can't keep on claiming that the entire bench is made from the same tree.

The chops were made out of the ash log, and I made those a bit tapered to make them look nice.
A square recess was chopped in each of them to receive a garter for the spindle. 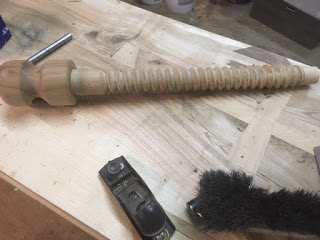 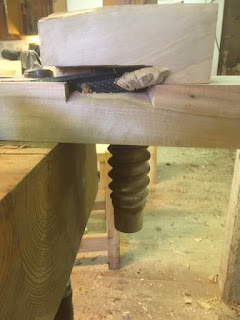 Close up of cutting action of the die. 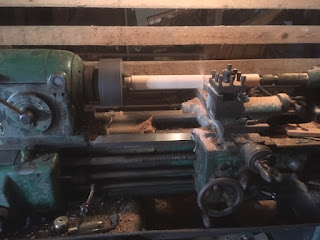 Turning a spindle blank on the metal lathe. 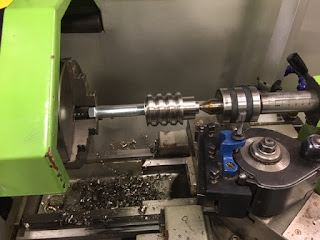 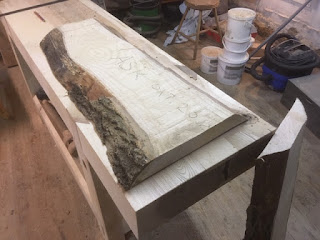 Two pieces of ash for the vise chops. Recess for the garter.