The two leg vises each had a parallel guide installed. I made a mortise and tenon joint with lightly tapered run out, so the guide was thoroughly fixed be means of a couple of wedges.
I made two lines of holes, so I can adjust the parallel guide with 1" increments.

A groove was routed in the underside of the top, and a sliding deadman was made and installed. A bunch of holes were drilled in that one too.

My old bench was never fitted with a shelf, I have often thought that it is one of the few things that could make a good bench better, so for this one I wanted to install one.
The shelf itself was made out of small ash boards of varying width. I simply milled whatever pieces I could find from the large log, and to avoid live edges, they were all trimmed.
The shelf lies loose on top of a batten that is screwed to the stretchers. I positioned the shelf so that the ends and the rear was flush with the top of the stretchers. That way it will be easy to sweep debris of the shelf, or push/pull a heavy object in and out of the shelf.
The front stretcher carries the sliding deadman, so that one ends in a triangular shape that raises above the shelf.

The ends of the slab were sawed square and they and the top were planed using a couple of hand planes.

I purchased a really nice Record quick release vise from Brian Eve, and I plan on installing it at some point. But I'll wait a bit because the wood is still moving a lot as a result of it not being completely dry.

I think that I need to run the tap through the threaded holes in the legs too when the bench dries, just in case the wood movement distorts the legs and thereby shrinks the holes.

The bench hasn't received any sort of finishing, but I might give it a coat of linseed oil to protect the surface a bit.

I told Gustav, that I would like him to have the bench, since he will train to become a carpenter. So we have installed it in the shop so he can start using it. 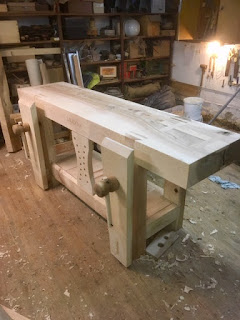 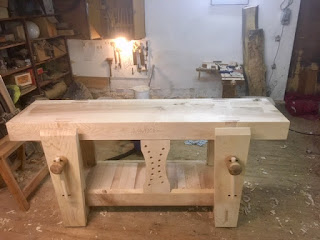 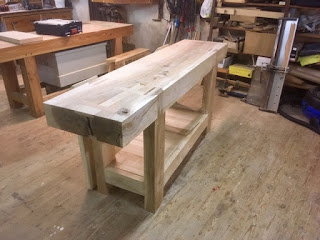 Rear of the bench (now on a clean floor) 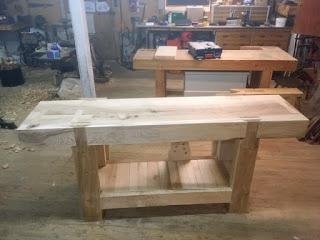 Shelf is flush with the top of the rear stretcher. 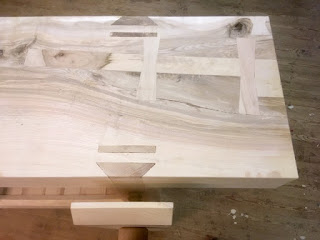 The patched up top of the slab. 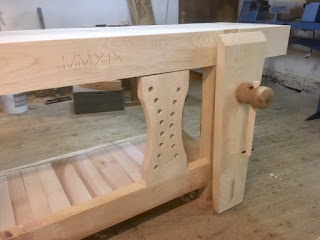 Spindle with apple hub and ebony pegs for the dowel. 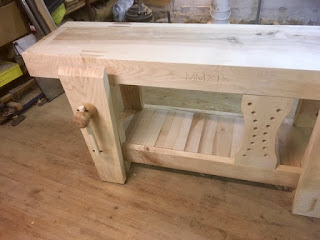 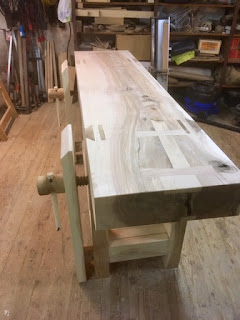 This end will feature a Record quick release vise at some point.