The Boston Teapot Trophy is a trophy that is awarded to the sail ship that covers the greatest distance over the course of 124 hours.
Why they have chosen that time frame I have no idea of, but as it happens, Statsraad Lehmkuhl has won the trophy 8 times.

Our ship is the current holder of the trophy, and due to that, the actual trophy is sitting on a shelf in the CEO's office.

The trophy itself is a copy of a teapot which was made by Paul Revere (yes, that Paul Revere!). Whenever we hold a meeting in the CEO's room, I find myself drawn to the box that holds the trophy.

Today after the meeting, I quickly snapped a few pictures of the box. I tried a little bit to remove the teapot, but I couldn't see a proper way of doing it, so I stopped before breaking something. While writing this, I got to think of that I think the correct way is to lift out the upper part (the teapot itself), and then remove the base.
I tried to pull a bit at the middle shelf surrounding the teapot.

Technically the trophy isn't part of the ship, but this is my blog, so I decide that it is OK anyway.
According to a link I found, the Trophy was established in 1964

You will be able to find some pictures of the teapot itself in the first link, but here are a couple of other pictures of some details of the box.

I can't see how the box itself is constructed, I mean if it is with secondary wood and veneered shell -or solid wood with blind dovetails. But the overall size of the box is something like 16" x 16" and 8" deep and inside it is lined with some dark blue velvet.
Neither of the screws are clocked which I find a bit strange, after all I am certain that the box was made by someone professional.
The original silver plate on the right hand door has nice engravings, whereas the new silver plate inside the lid has got some not so nice machine type engravings. This is to be expected,as engraving is not something that any goldsmith can do anymore as far as I have understood.
The bracket holding the top of the teapot in place is clearly made with a Forstner bit. I think that is the one detail that look the most out of place to me. Using a Forstner bit is OK to remove the material, but it wouldn't have taken much to take a spade bit of a similar size and ground it to a round shape. Then carefully rounded the bottom of the hole.

Now all this may sound as I am ungrateful for the Trophy which is not the case. Instead I would say that I find it intriguing that after having built stuff myself - I am able to see that not everything that was made 50-60 years ago was better than what could be built today.
Maybe the cabinetmaker tasked with the job had to work on a tight budget because the teapot itself had cost more than anticipated, so a bit had to be saved on the box. Or maybe it was someone who had never heard of clocking screws? We will probably never know. 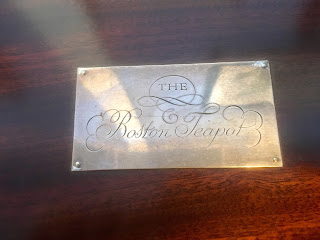 Silver plate on top of the box. 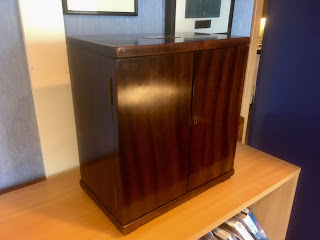 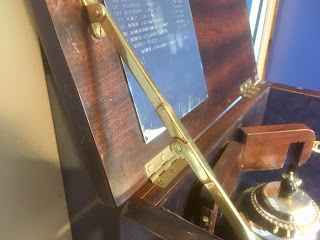 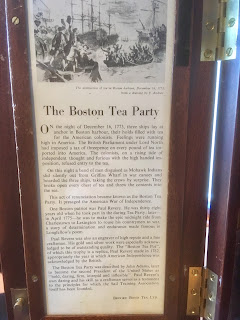 Description of the inspiration for the trophy. 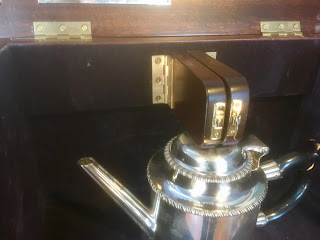 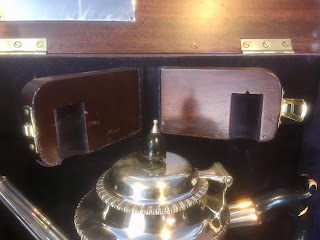 Let's just use a Forstner drill, no one will ever notice..