With the back fence glued on, the next thing was to attach a front fence. This is the fence that the material will naturally rest against, given the position of the blade.
Originally I wanted this piece to be in the total height of the plane plus a bit more for the fence part, but since I didn't bring enough beech with me, I had to try to make it some other way.
The fence had to go so far in that it would cover the forward corner of the blade at all times. I also wanted it to cover the entire escapement hole.
I measured those two distances and found out that I had to make a 3/4" rabbet that was 3/16" deep.

Olav was so kind as to give me a Stanley No 50 combination plane. This plane should be able to make rabbets, dadoes, tongues and grooves plus mouldings.
Therefore I had left my trusted grooving plane and moving fillister plane at home.
I read the instruction manual and got the plane set up to work as a rabbet plane. The depth of cut was harder to adjust than I had expected, but the rabbet ended up looking OK. I guess that beech is a fairly hard wood to work with a plane. At least I am not used to working with it.

Once the rabbet was complete, the fence was glued to the body of the plane. While the glue dried, I worked a bit on the wedge. The fat part of that received a semicircular shape. I also trimmed the thin end so it would not protrude past the rear fence when inserted.

When the glue had dried I drilled the escapement of the fence. Some work with a file, chisel and sandpaper resulted in an escapement that looked just right to me.

I couldn't resist the urge to test cutting a moulding with the plane. I set up the plane and in very short time I had a nice crisp looking moulding added to the rear fence. Since I had so much fun doing this, I quickly decided that the front of the rear fence and the forward fence would benefit from having a similar moulding. I think it makes the plane look a bit more finished.

The ends of the plane were squared off using a saw and the marks were removed with a file and some sandpaper.

All edges were chamfered slightly and MMXVII (2017) was chiseled onto the side of the plane.

I tested it, and it works better than I had ever imagined. A thin shaving will result in a tightly coiled spill some 3/16" at the fat end.

I intend to use my spill plane as a stationary plane. I think it will be easier to make some sort of arrangement that will catch all the spills that way, compared to if the work piece is stationary and the plane is moved back and forth.

This is the first real plane that I have ever made, and I think it has been an interesting project. The dimensions don't matter much, as long as they will fit the blade you plan on using. The body could be made from whatever wood you happen to have at hand, but a hard dense wood will surely hold up to more use than if you made the plane out of balsa wood.
I am tempted to make another plane like it, to give away as a present. In my opinion it would make a really fine and personal gift to someone who uses a wood burning stove.
Once my boys get over the fact that there are no secret compartments in the plane, I am sure they will enjoy making spills in the workshop with me. If that happens I will conclude that the project has been a success. 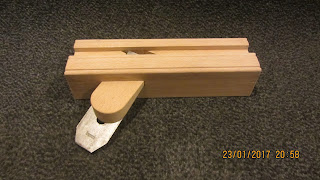 Spill plane made out of beech. 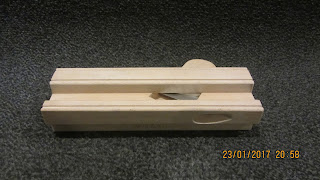 Escapement side of spill plane. 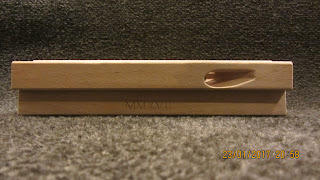 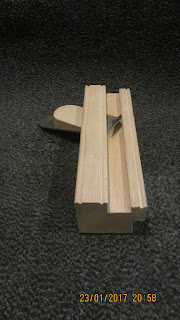 Unorthodox size of the forward fence. 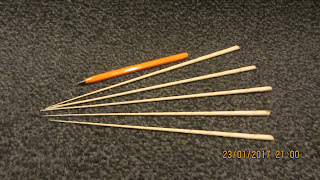