Making an infill plane from scratch 3, Laying out the sole.

I received a comment today from Kevin Brehon. He is also building an infill plane, and he has posted some very interesting considerations regarding his design and the building process as a whole.
You can read his blog post here.

My project is moving forward at a steady pace: The blade, the chipbreaker and the screw all cleaned up nicely after being soaked in vinegar for a day. A really fantastic thing is that the black crust/scale on the steel bar also disappeared after the vinegar bath. So now I have some bare grey steel to work with which is nice.

Yesterday I sat with a piece of paper and tried to make something resembling a construction drawing of the plane. With actual size measurements and angles etc.
I also experimented a bit on the dovetail lay out until I finally arrived at something I believed in.

Today I squared up the three pieces of steel bar and sawed them to the correct length and made sure that the freshly sawn end was filed square too.
I then started laying out the lines on the sole. I started by scratching some longitudinal lines that would define the depth of the dovetails and also define the final width of the plane.
I will end up with the pins being 1/8" proud. That should be more than sufficient for peening, but off course it will give me a lot of material to get rid of in the end. But when working with standard width stock you can't be too picky.

Next I laid out the position of the mouth, but I deliberately made it too small. My idea is that I can open it up later so I can achieve a tight mouth when the blade is inserted.

The dovetails were laid out last. I eyeballed an angle that I found pleasing, and marked the lot of them.

I marked out some help lines and punched some dents with a center punch, to give the drill a starting point.
My idea is that it is faster to drill out material than it is to file it away.

All this actually took the best part of the evening, and there isn't much wow effect in showing a piece of sheet metal that looks like a Ford T after a gunfight in an old gangster movie . But it is all that I have got for you. 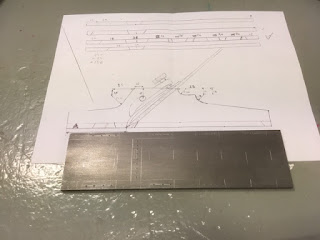 Construction drawing with sole all laid out in front. 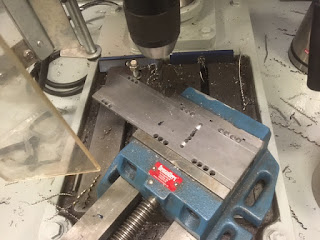 It really helps that we have a very nice drill press.