A small barn for the summer house 15, work on the staircase and a small setback.

There isn't much to be said about the work progress at the small barn, installing all those boards takes a longer time than I anticipated while sitting on the ship. I had the unrealistic idea that I could install them all in a matter of a couple of days. That has not been the case. I'll admit that I haven't worked exceptionally long hours out there.
Instead I have taken my time in the morning, driven out there slowly. Taken Bertha for a long walk along the shore before making a pot of tea. And then I have started on the actual work. I have generally tried to stop around 2-3 P.M. to be home in the afternoon with the children.
Today I hope to be able to install some of the last boards, and then I'll see if I can complete the staircase.

The small setback occurred Sunday afternoon. I was supposed to drive to Viborg to pick up Asger from a goalkeeper camp, and I decided to take the green Volvo Valp. I had to bring some large boxes for my older brother, and Mette wanted to use the regular Volvo to pull the horse trailer so she could ride in the forest with a friend.
I have changed the ignition coil, the points and the capacitor on the green Valp, and it ran like a sewing machine. All the way till I reached the middle of Sallingsundbroen (the main bridge leading to our island). At that point the engine suddenly died completely.
After testing the starter button, I found that the engine could turn, but it turned much faster than normally. I then tried to look into the rocker arm cover by removing the oil filler cap - and nothing moved at all in there.
These old Volvo engines haven't got a timing chain or a timing belt. Instead they operate with timing gears. The middle gear is made out of some sort of fiber and does not last forever...
After checking with an old mechanic who's a friend of mine, he said that nothing is damaged inside the engine when this occurs. So I just have to order a new set of timing gears and replace them. I think that might be a job for the next time I am home. 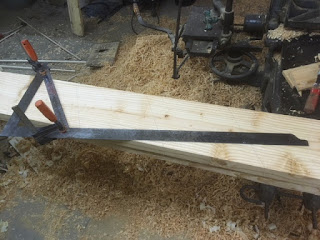 Following the advice of Nathan Simon, I used a framing square for the lay out. 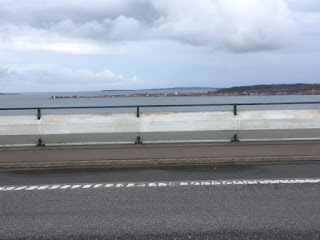 View from the bridge (to the North). 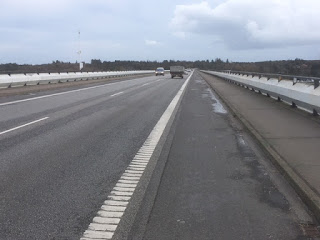 View to the East.

Email ThisBlogThis!Share to TwitterShare to FacebookShare to Pinterest
Labels: Barn