A small barn for the summer house 14, starting on the staircase.

In the evenings I have tried to start out on the staircase for the  small barn. The work is not very efficient, since both Gustav and Asger have started some projects in the shop too. I try to help them out, and once they are tucked into bed, I'll have something like an hour where I can use the shop by myself.
I have milled the steps, and they are pretty close to the thickness of the floor boards (1.75"). The two longitudinal parts of the staircase (I have no idea what the correct English word is?) Are a bit thinner. I would have liked them to be the same size, but the two boards that I had of the correct width were fairly twisted, so it took some thickness to get them flat and level. I suppose that I could have milled some new boards, but they would not have been as dry as those, and they finally ended up something like 1 3/8" which I think will be strong enough.

I have been looking as Das Zimmermannsbuch  for some inspiration, and they suggest that for the more modern approach you should attache the steps by means of sliding dovetails.
An older and simpler method is to just use a groove and either make a tenon on half of the steps or secure the steps by means of nails. I think that I'll go with the groove and nails model. Because the barn is supposed to be kept a bit simple.

Right now I have had to devise some special workholding, in order to be able to joint the edges of the longitudinal parts.
10' is a bit too long for my workbench, but perhaps that could justify building another and larger one?

There will be very 8" in height difference between each step, and the angle of the stairs will be 58 degrees. So it will be a fairly steep staircase, but this is to avoid that it will take up too much space in the relatively small room of the barn. 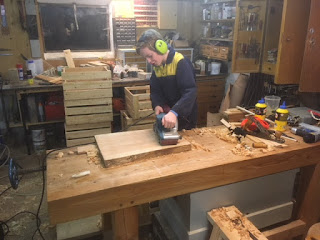 Asger sanding a cutting board. Gustav's apple crates are in the background- 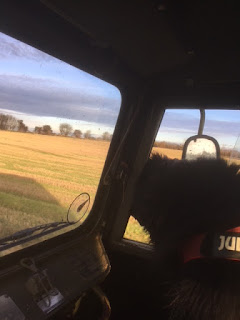 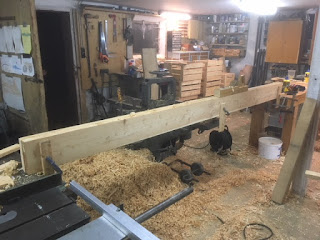 Workholding of the long parts of the staircase.

Email ThisBlogThis!Share to TwitterShare to FacebookShare to Pinterest
Labels: Barn