Yesterday evening I first removed the remaining waste between the pins. Then I transferred the pins to the sides where the tails were going to be.
Those were sawed out on the edges and a drill removed most of the material. After that a file was used to remove the rest of the waste down to the baseline.
After a little adjustment, the pieces went together as they should.

I used a file for flaring out the backside of the pins, in order to make the "double dovetails". And that was pretty easy. I didn't make a huge flaring, but just enough so that the dovetails will be locked once I peen them together.

When I made the infill smoother a couple of years ago, I made the aft part of the sides with a couple of swooping lines. Or at least that was the thought behind the design. I decided to see if I could make this plane look as though it had some relationship to the bigger plane, by making the same design feature.
It didn't work out at all!
First the drill started wandering off because my design placed two holes too near each other. I thought that I could fix it with a file and still make it look good.
After a bit of filing it became clear that I could not make two small swoops that looked good.
I found a bigger diameter round file and decided on one swoop instead.
The edges turned out pretty well and I was happy until I removed the sides from the vise.
Instead of the elegant shape that I had envisioned, I now stared at the silhouette of a pickup-truck with an extended cab.

To get on from that point, I marked out for the mouth of the plane, and drilled a series of holes where the mouth will be. The holes were then cleaned up with a file. It is a lot easier to drill and file in just the sole on its own, instead of doing it when the sides are connected pickup shaped or not.

I didn't want to start peening the parts together because it was getting a bit late, and I didn't want to disturb anyone, and I also didn't want to risk messing things up.
After working a bit more with the material, I am beginning to think that it might be bronze rather than brass. First it doesn't smell like brass and second it machines differently too. Brass will make a lot of small chippings when drilled, but this makes nice long shavings when drilled. (there is probably a correct word for that too).

The next part will be to work a bit more on the mouth, peen the parts together and start making the wooden infills. 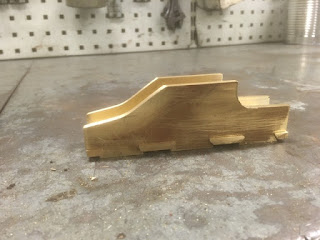 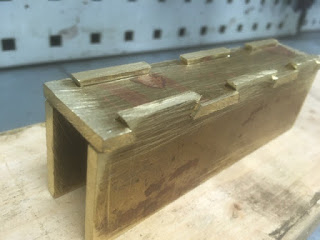 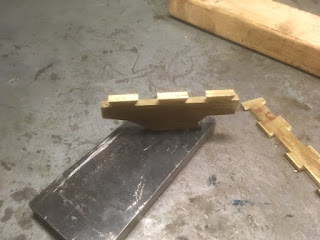 I had glued the sides together before filing them.