The door of Silence

As I have described in my previous post, I have started making a new door of Silence.
Yesterday I made the stiffener for the door. It is made out of 2x5" larch, and the ends are mortised and drawbored into the diagonal part as can be seen in the picture below.

The door itself is made out of 1½x6" larch and the individual boards have received a rabbet on two corners so the door will be shiplapped.

A lock from an old door was mortised into the edge board so the door can be opened and closed as it should.

The shiplapped boards are nailed into place, and the nails are clenched.
I have made a tutorial regarding clenching, so people who would like to try it can have an idea of how it is done. Please bear in mind that these nails are rather big (3/16 x 5.25" or 4.6 x 130mm).
The adjustable wrench used in the process is an 18" just to give you an idea of the size.

I have not placed the head of the nails on a metal surface since I don't have one large enough for the door. But using the adjustable wrench allows the clenching to be made without problems. I first tried to bend the tip of a nail using a pipe wrench, but it was not a success.

Finally the door was cut to size and the fit in the frame was tested. Hopefully I can install the hinges tomorrow. 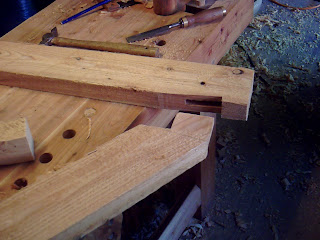 The mortise and tenon of the stiffener for the door. 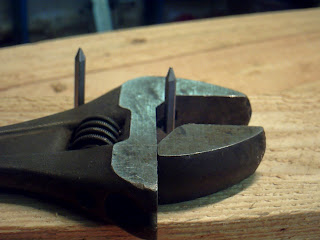 A heavy piece of metal is placed next to the nail. 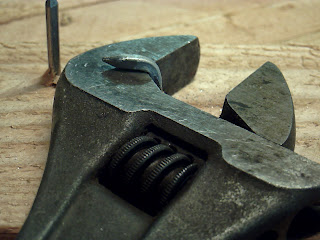 The nail is bent 90 degrees using a hammer. 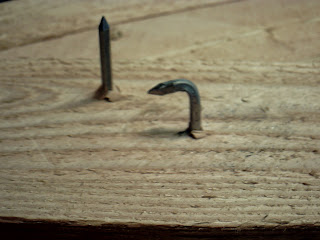 The nail is bent even further to approximately 80 degrees. 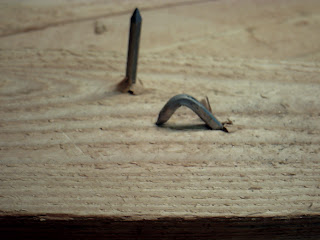 The nail is driven into the wood by hitting the bend. 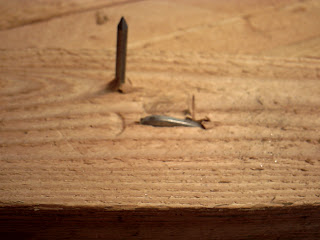 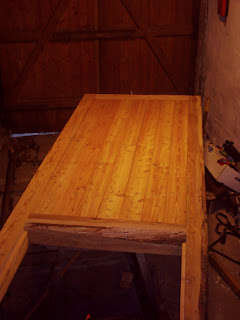 The door test fitted in the frame.
Posted by Jonas Jensen at 1:45 PM