A small barn for the summer house 13, internal boards.

I have been making some progress on the internal boards for the small barn.
Those were the boards that I had to shift inside as I was called to work a week earlier than anticipated.
So the first task was to shift all of them out again. I decided that I could work around the table that was inside, but I still needed to move the chairs and a bit of other stuff outside before starting the actual work.

The boards are the same type as those that were put on the sub roof. It is not a typical type of boards to use for internal paneling/boards, but it is of a much better quality than the regular type used. In Denmark the usual boards to be used would be something called "rustic boards". They are made out of the surplus Christmas trees that grew to fast so they were too large to sell. The distance between the growth rings is typical 3/8" or thereabouts, so the wood is of an exceptionally poor quality. The shape is like a tongue and groove board with the tongue something like 1/2" too long. So once the boards are mounted, there is a trench between each board. They are available in various widths and either nature, or artificially whitened, smooth or rough sawn.
But that aside - I chose the other type because I think they look better in a classic barn, and they were actually cheaper per square meter (or square foot if you like).

I mount the boards using regular nails. I know that a pneumatic nail gun is faster, but I actually like to hammer in nails, so I go for the slow and old fashioned way.

Once all the boards are mounted, I plan on putting some strips of wood in the corners and around the window sills, to cover the gaps. 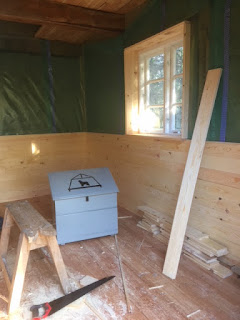 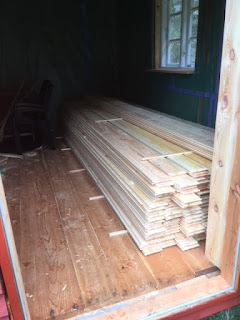