Yesterday I managed to complete the Norris style adjuster and mount it. I never got around to write a blog post about it, since it was getting a bit late.

Today I realized that I couldn't really put it off any longer. There wasn't much work left to do on the plane save for sharpening the blade and make sure that it was seated well on the bed (frog). Flattening the sole and sanding everything once again.

I silver soldered the threaded part to the adjuster base, so it is not possible to do any lateral adjustment with this adjuster, only depth adjustment.
A recess was made in the front of the rear tote, by first drilling a series of holes and later chiseling the waste out. I painted the back of the base with a whiteboard marker, and I could see where it had rubbed off, that there was a high spot. The same method was later used to check and adjust the seating of the blade.
The rod with the adjustment screw could have been a bit longer, but I guess that you don't adjust such a plane all the time, and I prefer that the adjustment screw is not protruding too much form the plane.

It took a bit of fiddling to find the best initial position for the retaining ring and the threaded rod, so everything worked fine at maximum and minimum depth adjustment.

Eventually I had to file a bit more from the underside of the lever cap, to be able to slide it under the fulcrum pivotal rod (it has probably got some other name).
This caused the lever cap screw to be just in the shortest range. So I think that I will make a new screw with a 1/8" longer threaded portion.

Today I sharpened the blade and after doing that I inserted it in the plane and tightened the lever cap screw. With the blade in place and the screw tightened, I then started to flatten the sole of the plane.
The idea of doing this while the blade is in the plane and in tension is, that it could potentially distort the sole of the plane a bit, and therefore it is best to flatten while everything is as close to working conditions as possible.
I also took the time to mark the bed with MMXVII for sake of good order.

Our lapping plate is new, but still I am not convinced that it is 100% flat and true. But I guess it is good enough for a home made infill plane. And besides it is what I have.

After some more sanding I treated the wood with some olive oil. I guess that it will slowly be absorbed by the wood, and then when I get home I can give it some paste was or some linseed oil as I have originally planned.

I tested the plane to see if it would work, and it actually did. I was able to plane a small piece of Bubinga both ways. It wasn't the most dramatic grain run out, but it did its job perfect with the grain and against it.

Conclusion of the project:
This project required a lot of metal work and comparatively little woodwork. There was much more filing and sanding compared to my usual projects.
There were a few difficulties that arose during the course of the build, such as less than ideally positioned holes etc.
The Norris style adjuster is a cool feature, but I tend to think that hammer adjustment would have been better. It could easily just be my adjuster that isn't the best - but now it sits there. If it ever acts up or seizes to work, then I can always remove it and either fill out the gap left behind, or just leave it as it is.
I personally think that the plane came out all right. There are a few places that still has got some minor scratches, but it was meant to be a tool, not a sanding contest.
My favourite part of the plane is the front tote where it blends in with the sole. And the lever cap with the massive number C954 cast into the front.
If I had been at home I doubt that I would have persevered during such a project, but out here it is more a matter of doing something to keep myself busy in my spare time.
I am not sure that it works any better than a regular Stanley, but it looks better in my opinion, and besides, I think it is the only infill plane in the world that was made on board a ship. 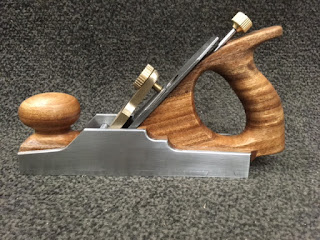 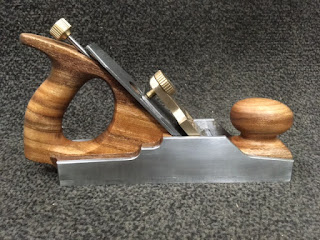 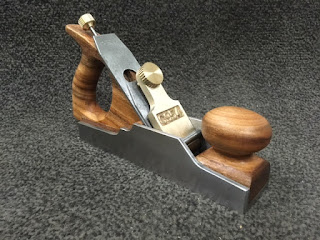 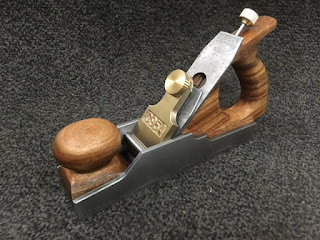 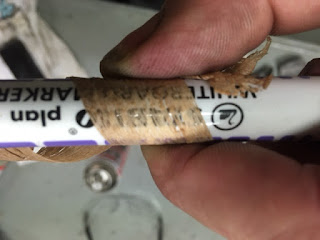 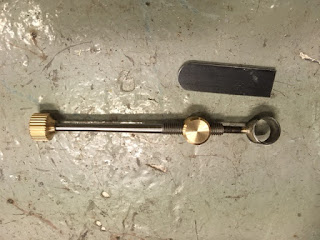 Parts for the Norris adjuster. 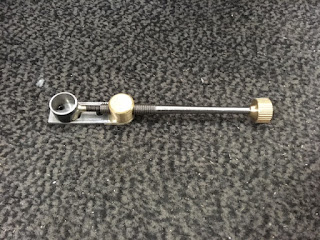 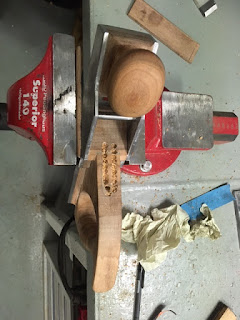 Making a recess for the adjuster. 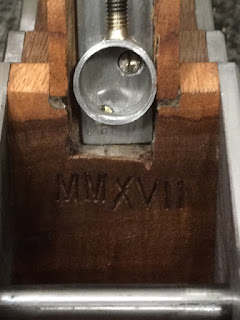